Rage Against the Machine Debut gets Audio Fidelity release! 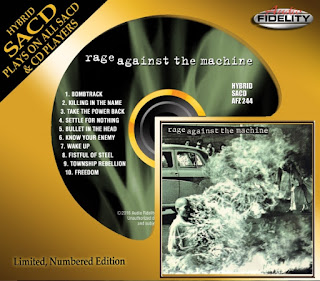 Depending on your age and musical perspective, rockers Rage Against the Machine are either to blame for the inexplicable commercial success of the rap-metal genre during the 1990s, with all that entails – Tool, the Deftones, Limp Bizkit (*shudder*) – or they were merely pioneers of a new hybrid style that rapidly went in the wrong direction.

The Reverend remembers his first hearing of Rage Against the Machine – on a cross-country repo job, I was driving a fire-red pickup truck with dodgy provenance from Oakland to Nashville. I picked up a copy of the Rage Against the Machine album on cassette tape from a truckstop in Nevada, and blasted it full-tilted through that state, across Utah’s Salt Lake Desert, over the mountains of Colorado, and over the badlands of Kansas. On June 24th, 2016 Rage Against the Machine will receive a long-overdue (IMHO) upgrade when our esteemed friends at Marshall Blonstein’s Audio Fidelity reissues the album as a limited-edition, hybrid SACD.

The band’s energetic mix of punk furor and heavy metal thunder mixed with free-flowing, politically-charged, left-leaning rapped vocals was fresh, exciting, inciting, and seemingly laboratory-created to blast loudly from a car radio or shoulder-held boom box. Rage Against the Machine also included guest appearances by Tool frontman Maynard James Keenan and Jane’s Addiction drummer Stephen Perkins on the song “Know Your Enemy.” The album only rose as high as #45 on the Billboard magazine chart but would follow its critical acclaim with worldwide success, charting in the UK, Australia, Sweden, and Germany. The angry dynamics of Rage Against the Machine can only be enhanced with re-mastering and reissue in a high-resolution Super-Audio CD format.

Rage Against the Machine’s career was short, but groundbreaking in both influence and creativity. The band only released a total of four studio albums in eight years, with both their sophomore effort (1996’s Evil Empire) and third album (1999’s The Battle of Los Angeles) hitting number one in the US on their way to multi-Platinum™ sales. Even the band’s swansong, the covers album Renegades, rose to #14 on the charts and was subsequently awarded a Platinum™ Record.

Rage broke up in 2000, but has reunited sporadically for single shows and short tours; Morello is currently pursuing a solo career as ‘The Nighwatchman’ and has toured with Springsteen’s E Street Band while Wilk has been playing with Black Sabbath. It all began with that self-titled debut, a blockbuster album that was a true game-changer for rock ‘n’ roll!