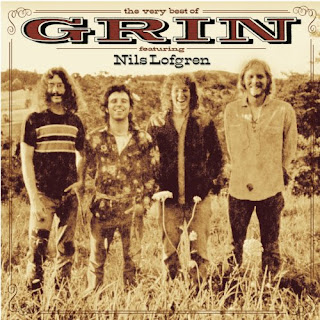 Nils Lofgren has gained a fair degree of respect for his role as guitarist in Springsteen’s E Street Band, receiving far fewer props for his solo efforts and studio work with Neil Young and Ringo Starr. Lofgren’s is a career that dates back to the late sixties, however, thirty years as a journeyman rocker and visionary. Grin, Lofgren’s first band, is one of those great cult favorites whose place in rock & roll obscurity outshines even Lofgren’s wonderful, if mostly ignored solo career.

Grin released four fine major label albums during their six years, 1968 – 1974, and toured constantly, supporting folks like Jimi Hendrix, the Faces, the Byrds and the J. Geils Band. The Very Best Of Grin offers a deeper retrospective look at the band than previous “best of” albums, a nineteen song history that pretty well sums up what Grin was all about musically.

Grin’s The Very Best of Grin


Originally a trio, teenage guitarist Lofgren was joined by Washington D.C. music scene vets Bob Gordon on bass and drummer Bob Berberich, forming Grin. Signed by Columbia Records’ Spindizzy imprint with a little help from Neil Young and producer David Briggs, the band relocated on the West Coast to record their debut album. The Very Best of Grin includes four tracks from the band’s first effort, including the surprisingly honky-tonkish “Everybody’s Missin’ the Sun.” The previously unreleased “Nobody” is an outtake from the sessions for the first album and sounds a lot like a Lofgren solo song, offering a foreshadowing of music to come while the also unreleased “Sing For Happiness” from those sessions is a soulful ballad complete with lush backing vocals.

The band’s second album, the conceptual 1+1, proved to be their signature disc, yielding what would be the closest Grin ever came to a hit single, the buoyant “White Lies.” An energetic pop/rock tune with an undeniable hook, “White Lies” again sounds like solo Nils, the young guitarist developing his vocal chops and showing the charisma that would later create a loyal following. 1+1 was broken into two sides, the “dreamy” side and the “rocking side,” and The Very Best of Grin includes a selection of material from both, six songs in all. “Hi, Hello Home” offers a countryish beat with fine harmony vocals by Nils and guest Graham Nash. The turbo-charged “Moon Tears” would become a staple of Grin’s, and later Nils’ live performances, an enduring fan favorite that refuses to die.

Grin expanded to a foursome in 1972, adding Nils’ brother Tom on guitar and keyboards, a pairing that continues even today, the two brothers touring in support of Nils solo material. This Grin line-up would record two albums, the criminally-overlooked All Out, which would be their Spindizzy/Columbia swan song and the ill-promoted Gone Crazy for A & M, which would later become Nils solo label. The Very Best of Grin includes a half-dozen cuts from All Out including the rocking “Love or Else” with Nils and Berberich’s shared vocals playing off each others differences and strengths. “Sad Letter” is a bittersweet love song with a tearful guitar riff courtesy of brother Tom while the title cut is a soulful ballad featuring solid vocals by Berberich and guest Kathi McDonald. “You’re the Weight,” the lone cut here from Gone Crazy, is a flat-out rocker, featuring forceful vocals from Lofgren, a full band chorus and some tasteful six-string work from Nils.


Grin would be dropped by A & M Records after the lukewarm success of Gone Crazy, the band playing their farewell show in front of a hometown D.C. crowd in late 1974. Nils was almost immediately picked up as a solo act by the label, and would go on to enjoy a critically acclaimed if commercially questionably career until joining the E Street Band in 1984. Lofgren’s solo releases have been less frequent since hitting the road with Bruce, but albums like Silver Lining or Damaged Goods show a mature artist mining different musical veins that those enjoyed in his youth.

For those Nils Lofgren fans who know him only through his solo work or E Street Band performances, I’d heartily recommend The Very Best of Grin as a portrait of Lofgren’s roots. With only the classic 1+1 still out-of-print, this is the best documentation of the range and depth of one of rock music’s better, if little-known bands. (Sony Legacy Recordings, released June 8, 1999)