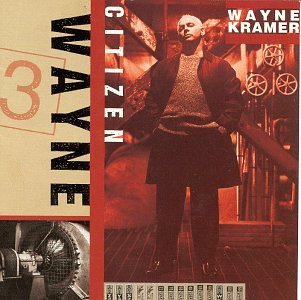 When former MC5 axeman Wayne Kramer made The Hard Stuff, his first solo disc for Epitaph, he recruited a gang of studio help that read like a literal “who's-who” of alt-rock and punk stars. Cashing in on his legendary reputation, Kramer delivered a solid effort that was one of the year's best albums. For his third Epitaph release, Citizen Wayne, the Gen-X sidemen are gone, as is long-time Kramer lyricist Mick Farren. Under the guiding hand of producer David Was, Kramer is entirely on his own here, and if the resulting songs aren't as breath-taking as those on The Hard Stuff, they ain't half-bad, either.

What a fucking idiot! David Was produced Citizen Wayne, not Don! Says so plain as day on the jacket. And he co-wrote half the songs. Doesn't take much effort to be accurate, you bloody amateur! Why even bother writing this pedestrian drivel if you can't get the credits straight?

Glad to know that there are still a few perfect people out in the world that get themselves worked up over a 25 year old record review...bloody wanker...