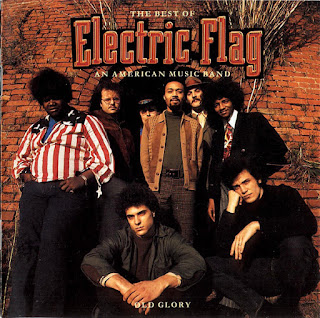 If Michael Bloomfield was still alive today, he would surely enjoy the same sort of elder statesman status that has been bestowed upon Eric Clapton. During the late 1960s/early ’70s, Bloomfield – a middle class white kid from Chicago – was accorded the kind of critical acclaim that only British guitarists like Clapton, Jeff Beck, and Jimmy Page received. Poor health, a fragmented recorded legacy, and his mysterious death in 1981 has instead relegated Bloomfield to the history books as an interesting, if obscure, icon of the period.

It’s a shame, too, because as anyone who has heard Bloomfield at his best would testify to, he was one of the most exciting and intricate axemen of the era – Hendrix included. Electric Flag, Bloomfield’s ill-fated stab at success, was conceived of as an "American” music band, that is, a vehicle for gathering together two decades of rock, soul, and blues into one musical entity. The original band only released one album, A Long Time Comin’ before splintering into different factions, with Bloomfield the first to leave due to his health.

Most of that album is represented by Old Glory: The Best of Electric Flag, the eight cuts culled from Flag’s debut illustrating a band that is trying to cover too much artistic ground at one time. It nevertheless serves as an excellent showcase for Bloomfield’s six-string prowess, building upon his work with the Butterfield Blues Band and opening the door for the solo work to follow. Cuts taken from The Electric Flag: An American Music Band, the band’s second album are sans Bloomfield and mostly provide a forum for the less subtle musical tendencies of ersatz band leader Buddy Miles.

A few rarities and a pair of unreleased live cuts taken from the band’s debut performance at the Monterey Pop Festival in 1967 round out the compilation. I’d recommend Bloomfield's solo material or his work with the Butterfield Blues Band first, but if you're hungry for more after that, check out Old Glory: The Best of Electric Flag for another look at this unheralded talent. (Sony Legacy Recordings, 1995)

Buy the CD from Amazon.com: Old Glory: The Best of Electric Flag