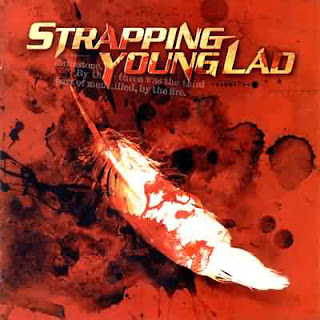 To make this comparison really come alive, you’re gonna need one o’ those industrial strength blenders, the kind they have in some food factory or maybe a slaughterhouse. Stick your head inside the giant metal bowl and feel the razor-sharp metal blades against your ears. Then reach over and hit the button for ‘puree’...that’s what listening to SYL is like. After a half-hour or so of joyfully experiencing Devin Townsend’s demonic growl and tortured six-string work, yer brain is guaranteed to turn to mush.

There’s heavy metal and then again, there’s HEAVY FUCKING METAL, and Strapping Young Lad definitely falls into the ‘HFM’ category. Townsend, former sideman for Steve Vai and a talented solo artist in his own right, mimics the sound of your brain being shredded like no other axeman plying his or her trade today (save for maybe Zakk Wylde). Townsend’s solo work tends to downplay his gonzo energy a degree or two on the old manic-meter in favor of prog-rock experimentation. When fronting his mates in Strapping Young Lad, Townsend throws caution (and the listener’s eardrums) to the wind to deliberately blast dangerous plaque from your speakers as loudly as possible.


SYL proves that there is more to Strapping Young Lad than Townsend’s considerable ability to crack yer cranium open with his guitar. Guitarist Jed Simon of Front Line Assembly adds a dimension of industrial insanity to the sound while drummer Gene Hoglan of Dark Angel pounds the skins with the force of an underground nuclear test explosion. Along with bassist Byron Stroud, Hoglan creates an intense rhythmic undercurrent over which Townsend and Simon throw down their clashing guitars. It’s kinda hard to follow the lyrics buried in Townsend’s vocals, so they provide a cheat sheet in the CD booklet. Inane poetic whimsy such as “dripping... gigbutt... dirt pride... my pride... dripping... bunksock” sounds a lot better when it comes roaring out of your speakers like so much unburned jet fuel from the ass end of a F-16.


The songs on SYL were inspired by the tragedy of September 11, 2001 and the album does express a fair degree of intelligent rage and frustration over man’s inhumanity to man (and woman), the above lyrics notwithstanding. Then again, nobody listens to HEAVY FUCKING METAL for the Dylanesque lyrical inspiration of the band’s muse. You slap something like SYL on yer box, crank the sucker up as far past ten as the amp will go, and then spend the next thirty or forty minutes bouncing off the walls until you either shit or go blind. To this end, SYL stands up admirably, temporarily robbing you of your vision and your hearing. With the apocalyptic tango of SYL, Strapping Young Lad delivers the first classic death metal disc of the century. (Century Media, 2003)