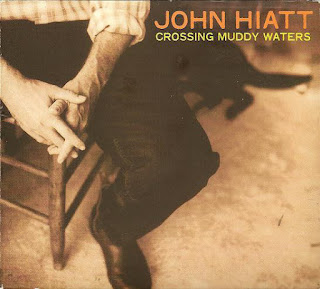 Crossing Muddy Waters, John Hiatt’s current acoustic project, makes perfect sense considering that Hiatt has always been about 25% folkie, 25% country, and 50% rocker at heart. Hiatt mixes all of his artistic inclinations together on Crossing Muddy Waters, throwing them into a big pot, adding a dash of soul and some blues to make a big ol’ tasty musical gumbo!

A gifted songwriter who has received far more recognition for other people’s versions of his material than for his own recordings, the raw ambiance of Crossing Muddy Waters probably won’t do much to lift Hiatt from undeserved obscurity.


Crossing Muddy Waters is a fine collections of songs, though, Hiatt’s masterful tales of the rural south exploring themes such as unrequited love, betrayal, religion and death that remain universal in their appeal. At this point in his lengthy career, Hiatt certainly harbors no illusions, and even if other people’s recordings of his songs have made him comfortable, his songs remain as intelligent and thoughtful as ever. Like most every other John Hiatt album that I’ve ever heard, there are some real gems among the tracks, and Crossing Muddy Waters is no exception.

“Gone” is a song of lost love that is nevertheless funny, the singer comparing his true love’s departure to other fleeting moments in life. “Mr. Stanley” is a bluesy dirge done Mississippi Delta style while the title cut is a lyrical “who dunnit” – why did the woman run away and leave her daughter behind? “God’s Golden Eyes” is a spiritual reflection on nature’s beauty and the intricacy of love. The album-closer, “Before I Go,” is a lively tale of eternal love that is rife with imagery and emotion (and will probably become a big hit for some other artist).

Aside from songwriting, another talent of Hiatt’s has been his ability to work with some of the best musicians around. Crossing Muddy Waters is no exception, with Hiatt enlisting the help of former Camper Van Beethoven members Davey Faragher and David Immergluck to help get his acoustic ideas across.


Crossing Muddy Waters has been nominated for a Grammy Award™ for “Best Folk Album” but it is much deeper than that. John Hiatt is an American treasure, a humble poet laureate with talents as wide and deep as the great Mississippi. His contributions to rock, country, and folk music is immeasurable and, as proven once again by Crossing Muddy Waters, Hiatt only continues to get better with age. (Vanguard Records, 2000)