The Blues Images 2020 Calendar Is Here! 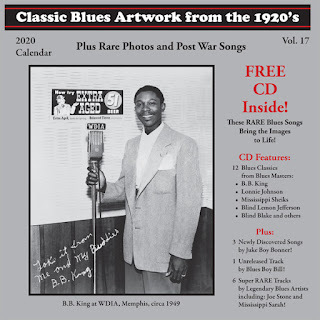 The Reverend has hung a copy of John Tefteller’s incredible Blues Images calendar on his office wall for over a decade now, its brilliant imagery and blues spirit providing inspiration for my own humble creative efforts. When the leaves begin to turn each autumn, I look forward to receiving the 12”x12” square box with the next year’s calendar enclosed, and I’m happy to say that the 2020 edition is now available!

For the neophytes among you, the Blues Images calendar features vintage advertising artwork from long-gone blues label Paramount Records that noted record collector and dealer Tefteller literally rescued from a dumpster over 20 years ago. Each year’s calendar preserves an immensely-valuable visual history of the early years of the blues; I donate my copies at the end of each year to the Bill Schurk Sound Archives at Bowling Green State University in Ohio.

This year, for the first time, the Blues Images calendar features more photographic advertising art than pen-and-ink drawing, probably because printing technology had improved by the 1930s-era date of many of these ads. As such, the calendar features rare, not-seen-for-decades photos of artists like B.B. King, Victoria Spivey, the Mississippi Sheiks, Bo Carter, “Texas” Alexander, Lonnie Johnson, and Bessie Jackson instead of the usual B&W drawings. Each calendar page is annotated with historical and biographical information about the featured artist, and each month also includes the birth and death dates of classic blues artists.

The Blues Images 2020 calendar cost slightly more than some cheap wall-hanger you’d buy from the mall or local bookstore, but for the hardcore blues fan, Tefteller packs a lot of value for the $24.95 (plus shipping) it will cost you. Each Blues Images calendar includes a full-length CD that features rare, impossible-to-find, and often one-of-a-kind tracks, many of them sourced from Tefteller’s extensive personal collection. The performances, which include the songs from the original advertising as well as related releases, have been remastered from the original 78rpm records using the ‘American Epic’ digital process that makes the sound on these antique shellac marvels really pop out of your speakers. 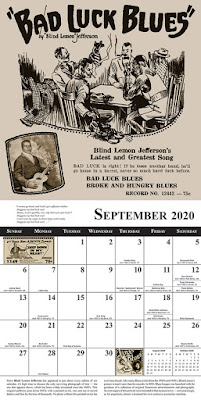 For 2020, Tefteller expanded the reach of the enclosed CD’s coverage to span from the late 1920s through the late 1940s, which encompasses a heck of a lot of great blues sides. The 2020 CD opens with a rare track from the calendar’s cover artist, the phenomenal blues legend B.B. King. “Got the Blues” is a jaunty, jazzy track released as King’s second single in 1949 by the Bullet Records label. It wouldn’t chart, but that’s OK ‘cause a couple of years (and a half-dozen singles) later, B.B. would strike gold with the R&B chart-topping “3 O’Clock Blues.” Still, “Got the Blues” sketches out the bluesy, jazz-flecked sound that King would take to the bank over the decades to follow.

Victoria Spivey’s “Blood Thirsty Blues” takes the listener back to the 1920s – 1927 to be exact – the song’s vaudeville roots apparent in its early jazzlike feel. Spivey recorded with greats like Louis Armstrong and King Oliver throughout her career, so the jazz influences heard in her vamping blues are honest. The Mississippi Sheiks’ “Baby Keeps Stealing Lovin’ On Me” is a prime slice of jug band blues dating to 1930 while Sheiks’ guitarist Bo Carter’s “Howling Tom Cat Blues” is an enchanting, underrated track from 1931.

There’s a lot of other great stuff on this year’s CD, including tracks by “Texas” Alexander with the Mississippi Sheiks (“Days Is Lonesome,” 1930), Blind Lemon Jefferson (“Bad Luck Blues,” 1930), Lonnie Johnson (“She’s Making Whoopee In Hell Tonight,” 1930), and Bessie Jackson (“Shave ‘Em Dry,” 1935), all of which are represented by cool advertising artwork across the months. The CD includes another ten tracks for which there is no artwork, but represents a treasure trove of blues music nevertheless. You’ll find three recently-discovered (and unreleased) demos by obscure bluesman Juke Boy Barner, a couple of songs by Blues Boy Bill (one of ‘em previously unreleased), and super-duper-rare recordings by folks like William Moore, Mississippi Sarah, and Joe Stone (a/k/a Jaydee Short).

The annual Blues Images calendar and CD is a “must have” addition to the collection of any serious old-school blues fan. Blues Images sells other cool blues-related stuff, too, like posters, t-shirts, CDs from previous years, and past years’ calendars. You can find it all on the Blues Images website. Tell John that “the Rev sent ya!”
Posted by Rev. Keith A. Gordon at Sunday, December 01, 2019