Archive Review: Billy Bragg's Talking With the Taxman About Poetry (2006) 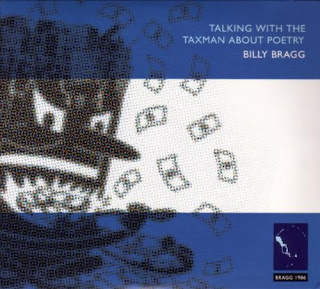 “But if you think all I do is press words other people use into my service Comrades, come here, let me give you my pen and you can yourselves write your own verses!” – Victor Mayakovsky, 1926

By the time of the 1986 release of Talking With the Taxman About Poetry, Billy Bragg’s self-professed “difficult” third album, the artist had become the poet laureate of the musical left. A tireless troubadour of socialist leanings, Bragg placed more fervor, energy, passion and emotion in a single phrase or turn of a word than most artists are capable of mustering throughout an entire album.

After a couple of critically acclaimed British EPs and a full-length indie album, Talking With the Taxman About Poetry represented Bragg’s major label debut in the United States. Although Bragg had softened some of the rough edges that endeared audiences to his early work, the lyrical arguments presented on Bragg’s third album proved no less passionate, his penchant for radical polemics no less zealous.

Billy Bragg’s Talking With the Taxman About Poetry


Whereas Bragg’s early songs featured only his thickly-accented vocals and an accompanying guitar, Taxman was fleshed out with a few additional strings, a horn or two, and even an occasional background harmony. The music remained stark, simple and effective, Bragg’s folk-punk musical style serving to underline the importance of his lyrics. First and foremost, Bragg is a poet; a hopeless romantic with a revolutionary bent (not unlike Byron), whose lyrics deal almost exclusively with love and politics – not an entirely inappropriate combination, for one inevitably involves the other. Bragg aims his pen mercilessly at the governments, institutions and the societies that would oppress the seemingly unflagging human spirit.

Bragg champions the worker as a noble creature, envisions romantic love as the Holy Grail and, at times, jabs so deep in the heart with his lyrics and often times brutal lyrics that he is able to invoke the tears/passion he himself obviously feels. The recent Yep Roc Records two-disc reissue of Talking With the Taxman About Poetry includes the entire album, remastered and spiffed up for the digital age, along with a bonus disc of rarities and inspired covers. Songs like Gram Parson’s “Sin City,” Woody Guthrie’s “Deportees,” and Smokey Robinson’s “The Tracks of My Tears” reveal the depth and scope of Bragg’s musical influences and display the artist’s charm and joy in music-making.


Even after 20 years and better than half a dozen album releases, Billy Bragg remains an acquired taste. His music has never been a commercial commodity, although he has enjoyed a hit song or two along the way. As this critic wrote at the time of this album’s release, Bragg “is one of the most important artists to enter the rock arena in years – perhaps the most political folksinger since young Bobby Dylan strode into Greenwich Village with a guitar in hand.”

Bragg remains a man with a message, a poet of uncanny vision and a socially concerned artist whose work remains as fresh and relevant today, in the days of Bush and Blair, as it was during the Reagan/Thatcher era two decades ago. Much of today’s “folk revival,” the acid-folk music of artists like Devendra Banhart, owes a great debt to Bragg, an artist who, inspired by the music of Joe Strummer, would go on to create inspiring music of his own. (Yep Roc Records, 2006 reissue)

Buy the CD from Amazon.com: Billy Bragg’s Talking With the Taxman About Poetry