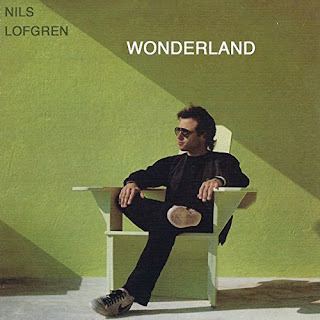 There will be absolutely no argument about this, people – Nils Lofgren’s “Across the Tracks” should have been a mondo-huge radio hit. Period. I’ll hear no debate, no dispute, no qualifying…MONDO-HUGE radio hit! I’ve got the charts and pie graphs and seismograph readings to prove my point…and if that doesn’t convince you (wink, wink), I also have a ten-pound sledge and an itchy trigger-finger. Yeah, I thought so…

By the time of the 1983 release of Wonderland, Nils Lofgren had enjoyed status as a rock-n-roll wunderkind for over a decade, beginning with his brief tenure as part of Crazy Horse backing Neil Young, and continuing through his work with cult favorites Grin. Nils had half-a-dozen major label solo recordings under his belt by this time, but he was also on his second record label in only eight years, and had been unable to break free of the increasingly crowded rock guitarist pack. Lofgren seemed doomed to “also-ran” status for the remainder of his career, forever fated to being a critic’s darling. Critical acclaim doesn’t put beans on the table, however; you have to sell some records at some point in time.


Ultimately, when standing at the crossroads, Lofgren chose to put his career on the back-burner and take up Bruce Springsteen’s offer to join the E Street Band after the departure of popular guitarist Steve Van Zandt. The decision to take a walk down E Street made Lofgren a wealthy man, but one has to wonder if he has ever thought about what might have happened had he chosen to continue pursuing the brass ring on his own. Through the years, critics have pointed their collective fingers at various reasons for Lofgren’s failure to break through, from lack of label support and the unflinching ignorance of radio to the typically shallow production of the artist’s albums and even to Lofgren’s own lack of personality.

Wonderland was the last album that Lofgren recorded before jumping on the whirlwind Born In the U.S.A. tour with his New Jersey pal Bruce, and it stands tall among his best work. Contrary to what many pundits assert, Wonderland proves to this critic that Lofgren has no shortage of personality. A varied and heartfelt collection of material that was well-rehearsed and basically captured live in the studio, the album provides Lofgren with the guitar showcase that he had always deserved.

The aforementioned “Across the Tracks” is an energetic tale of star-crossed lovers, Lofgren’s spirited vocals complimented by a heavy drumbeat, an undeniably catchy melodic hook, great Romeo & Juliet lyrics and some damn fine guitar work. Edgar Winter throws in barely-audible backing vocals. Unlike some of the other songs on Wonderland, “Across the Tracks” doesn’t suffer from period production – this is a timeless rocker that plays across the decades. Kudos to Andy Newmark for his killer stompin’ on the drum kit…


Ole Nils switches gears with “Into the Night,” a moody, atmospheric semi-ballad that displays Lofgren’s abilities as a crooner, his passionate lyrics matched with a lush arrangement and subtle six-string flourishes. “I Wait For You” is a larger-than-life, Springsteenesque mid-tempo rocker with stellar fretwork, notes flying everywhere as the drums ring clear like a jackhammer, Kevin McCormick’s throbbing bass tossing the boys a lifeline to pull them out of this emotional quicksand. The title cut is a syncopated, slightly Latin-flavored tune that reminds me of NYC; with backing vocals by the underrated, can’t-outstay-her-welcome-in-my-house Louise Goffin, the song is an enchanting romp through, well, Wonderland.

Wonderland was produced by Lofgren with his long-time bandmates McCormick and Newmark, and the work they did was ‘magnifico,’ accentuating their instrumental strengths and Nils’ solid songwriting chops while pushing Lofgren’s sometimes too-slight vocals to new heights. “Confident Girl” is a great example of the chemistry between the three, Lofgren’s guitar blazing with laser-like intensity while his vocals speak of a confidence that was sometimes lacking from his earlier work. Throw in some nice three-part harmonies and the one-two rhythmic knockout punch and “Confident Girl” could have easily been the second hit single from the album. Goffin also chimes in on the reggae-splashed “Everybody Wants,” Lofgren channeling his inner-Garland (i.e. Jeffreys) on this warm, infectious tune.

That’s not to say that there’s not a little chaff among Wonderland’s many pearls. “Deadline” might be a great song live, but as captured in the studio, it just stinks up the joint. The guys fell prey to the “sound de jour” and mucked up a song with an otherwise scorching guitar solo with new wavy synth punctuation that sounds hopelessly out-of-date a quarter-century later. Plus, Newmark’s delicious bass-heavy drumming is tossed aside in favor of a tinnier, repetitive, ‘radio-friendly’ snare drum beat that would induce a migraine in even the heartiest of listeners. The entire song sounds not dissimilar to the dreck produced by a lot of major label bands at the time, all trying to get their stuff on MTV. Ditto for “Lonesome Ranger,” a meager ballad that wastes Carly Simon’s perfectly good backing vocals in the creation of a funky, plasticized grab for airplay; there’s nothing here to differentiate it from a dozen other, slicker period bands that don’t have a tenth of this trio’s talent.


Overall, Wonderland signals the beginning of an evolution in Nils Lofgren’s creative direction. He would make one more very good (and similar) solo album in 1985’s Flip before taking the next six years away from recording. When Nils came back to the studio, he had matured as both an artist and a guitarist. He had toured the world as part of the biggest, baddest instrumental ensemble that has ever graced a stage in the E Street Band, taking part in marathon live shows that would test the talents of any musician.

By the time of 1991’s Silver Lining, Lofgren had better than two decades under his belt and his vision was clear, his influences fully absorbed. Although Lofgren’s creative output has been infrequent in the 24 years since Wonderland, resigned mostly to live albums and performances, there is no doubt that this album stands as a high water mark for the guitarist’s astounding career, an often overlooked album well deserving of another listen. (American Beat Records, released April 3, 2007)