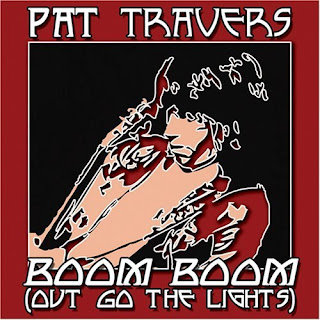 Blooze-rock guitarslinger Pat Travers is fondly remembered for his incredible string of late ‘70s/early ‘80s albums that began with his self-titled 1976 debut and ran through such blistering six-string showcases as Makin’ Magic and Putting It Straight (both 1977); Heat In the Street (1979), Crash and Burn (1980), and Radio Active (1981); and, of course, the signature Live! Go For What You Know (1979), which yielded Travers’ best-known tune, his red-hot and scorching cover of the Stan Lewis blues classic “Boom Boom (Out Go the Lights).” When the Reverend lived in Detroit circa 1979-81, you couldn’t turn on WRIF-FM without hearing Travers’ trademark guitar licks and distinctive vocals.


Unlike many so-called “classic rock” artists, Travers survived the onslaught of, first, punk rock and, later, “new wave” to carry stadium-approved guitar rock into the new decade. By the mid-‘80s, however, Travers’ trademark one-two punch of blues and rock had fallen out of favor with the MTV generation and he sat the rest of the decade on the bench, coming back into the game with School of Hard Knocks in 1990. Since that time, Travers has continued to plow the fertile earth of electric blues and rock ‘n’ roll cheap thrills, releasing a handful of decent studio albums – some with an abundance of original material – as well as a slew of remarkably consistent live discs, working through the years with other such respected rock journeymen as Aynsley Dunbar, Carmine Appice, Jeff Watson, and T.M. Stevens.

The secret to Travers’ ongoing longevity is that, through the years, neither his original songs, nor his typically inspired choices in cover material, have been all that complicated. My old buddy Grimey once said of ZZ Top’s early albums, “anybody could play that stuff,” and that’s also true of Pat Travers. What separates the bearded wonders from Texas – and the six-string wunderkind from Canada – from the great unwashed masses is although anybody can play this stuff, few are as capable of doing it with such energy, passion and originality.

Which brings us, in a roundabout way, to Boom Boom (Out Go the Lights), a rather worthwhile collection of Travers’ guitar rave-ups from the good folks at MVD Audio. While it might be easy to dismiss the disc as “justanotherPatTraversalbum” in spite of the ultra-groovy high-contrast Brian Perry cover art, with its reassuring deep maroon framework, you would have to be the worst sort of imbecile to pass this gem by in the “classic rock” bin of one of the few remaining record stores. Turn said disc to its reverse and take a gander at the glorious baker’s dozen of songs awaiting your purchase and tell me, honestly, closeted blooze-rock fan, that this collection of original Travers’ scorchers and rare cover tunes wouldn’t just ROCK YOUR F’KN WORLD!!!


Ostensibly this is an album of live performances and, since MVD licensed the content from Cleopatra Records, my best guess is that this elixir is of late ‘90s vintage, perchance from the same shows that populated the 1997 Whiskey Blues live album. Regardless, Boom Boom (Out Go the Lights) showcases Travers’ skills just as strongly as any of his late ‘70s releases, the middle-aged axeman finding new ways to breathe life into aging chestnuts like “Snortin’ Whiskey,” “Crash and Burn,” and the ubiquitous title track. It’s with Travers’ performance of songs by fellow travelers like Z.Z. Top, Lynyrd Skynyrd, Cream, and Aerosmith that a full measure of the artist is provided, however.

Given the man’s undeniable blooze-rock credentials (and I use the British slang term “blooze” since London is where the Canadian guitar prodigy cut his eye teeth), it should be expected that Travers would kick serious ass with tunes like the Texas mudstomp of Z.Z. Top’s “Waitin’ For the Bus” (a bull’s-eye right down to the Gibbonesque vox) and “Jesus Just Left Chicago” (ditto). Travers even acquits himself honorably on the redneck swamp sludge of Skynyrd’s “Gimme Back My Bullets,” while he should be able to play molten electric Chicago slag like Willie Dixon’s “Evil” in his sleep. But two of the covers here simply scream aloud from the smackdown laid down upon their pointy heads by Travers and his unnamed crew.

Travers’ energetic, soulful reading of Stevie Wonder’s wonderful “Superstitious” puts that of his former idol Jeff Beck to shame, the stellar fretwork displayed here is torn from somewhere deep down in the man’s rock ‘n’ roll soul. While the band struggles to keep up with Travers’ madman performance, the guitarist is walking on clouds with an extended solo so damn hot that it will leave blisters on the listener’s fingers. The other notable cover that DEMANDS your attention is the unlikely choice of “Lights Out” by British rockers UFO. With lightning bolt leads building upon galloping rhythms, Travers strays from his usual bluesy milieu to cut loose with reckless abandon on the strident hard rock classic, his vocals chasing some ghosts we can’t see, his trusty six-string coaxed and coerced into spitting out alien sounds that more respected “guitar gods” like Satriani or Vai can’t even muster up in their dreams.


Before you dismiss Boom Boom (Out Go the Lights) as “justanotherPatTraversalbum,” you should rustle up a copy and hear it for yourself. These thirteen songs are the perfect forum for Travers’ free-wheeling, swashbuckling six-string style, the album capturing the sound of a man whose time has clearly passed but he doesn’t GIVE A DAMN! Freed from commercial expectations, label demands, creative concerns or any of the constraints of the modern music biz, Pat Travers is able to simply do what he does best – rock! (MVD audio, released May 3, 2007)