British singer/songwriter Billy Bragg is best for his folk-rock protest songs and social activism and although he’s been able to find more than a cult American audience, he’s enjoyed modest commercial success in the U.K. Too often dismissed by critics as an unrepentant lefty, Bragg’s songs display a much deeper intellect and humanity than mere shouted rhetoric, his material often infused with melody and lyrically traveling to the edge of art where romance and politics intersect.

Bragg developed an interest in poetry while in school and first picked up the guitar as a teen, often practicing with his neighbor and future bandmate Philip Wigg (“Wiggy”). Bragg’s initial musical influences were the Rolling Stones and the Faces, while Bob Dylan and Simon & Garfunkel would influence his early songwriting efforts. At 20 years old, Bragg saw the Clash play in London on the band’s ‘White Riot Tour’ and again at a ‘Rock Against Racism’ concert a year later, events that would have a strong impact on his career and political philosophy.

Bragg formed the punk band Riff Raff with his friend Wiggy in 1977, recording a series of D.I.Y. singles and performing live for a couple of years until breaking up in 1980. Bragg wandered through a series of jobs, including working at a record shop, and even joined the British Army. After finishing up several months of basic training, however, he decided that the military wasn’t his sort of career and, for the sum of £175, he bought himself out of the service and returned home. Bleaching his hair, Bragg began performing his punk-inspired folk songs as a solo artist, opening shows for other artists and busking around London under the name ‘Spy vs Spy’, a choice inspired by the comic created Cuban expatriate Antonio Prohías for Mad Magazine. 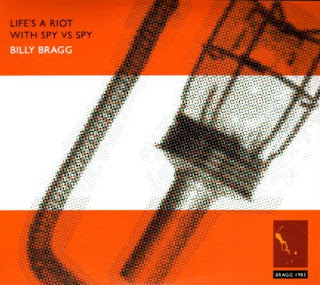 Recording a demo tape, Bragg got no response from the labels he shopped it to. By pretending to be a TV repair man, he got into the office of Charisma Records’ A&R exec Peter Jenner, who liked what he heard. Although Charisma was unable to sign the artist at that time, Bragg got a music publishing deal with Chappell & Co and recorded a series of demos that would subsequently be released by Charisma subsidiary Utility Records in 1983 as Life’s A Riot with Spy vs Spy. The album included Bragg’s song “A New England,” which would become a Top 10 U.K. hit when recorded a year later by singer Kirsty MacColl. When Charisma was bought out by Virgin Records, Jenner was let go and became Bragg’s manager. Former Stiff Records’ press manager Andy McDonald, who had formed his own Go! Records label, bought Life’s A Riot with Spy vs Spy from Virgin and reissued it in late 1983.

Go! Records would be the home for Bragg’s sophomore effort, 1984’s Brewing Up with Billy Bragg, which peaked at #16 on the UK albums chart on the strength of songs like the satirical “It Says Here,” the romantic “Love Gets Dangerous,” and the anti-war screed “Island of No Return.” England’s New Music Express magazine ranked the album at #6 on its “Albums of the Year” list for 1984. During this time, Bragg became known as a left-wing activist, performing benefit shows and attending political rallies. He helped form “Red Wedge,” a socialist musician’s collective that included the Jam’s Paul Weller. Bragg’s Between the Wars, a four-song EP, was released in 1985 and peaked at #15 on the UK singles chart. Inspired by the UK miners’ strike, the EP was explicitly political, and proceeds from its sale were donated to the striking miners’ fund. 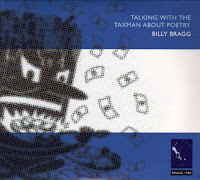 Bragg experienced his first North American tour in 1985, opening for Echo & the Bunnymen with his old friend Wiggy as his tour manager. He would release his breakthrough album, Talking With the Taxman About Poetry in 1986, which became his first Top 10 charting LP in the UK. While earlier recordings primarily featured just Bragg and his guitar, this third LP included studio contributions by singer Kirsty MacColl, guitarist Johnny Marr of the Smiths, and keyboardist Kenny Craddock of Lindisfarne, among other musicians. Bragg enjoyed his first Top 30 hit single with the album’s “Levi Stubbs’ Tears” while a second single release, “Greetings To the New Brunette,” would only rise to #58 on the charts. 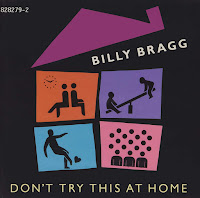 Released in 1991, Don’t Try This At Home, recorded in the shadow of the build-up to the Gulf War, offered a mix of more commercial pop songs (“Sexuality,” co-written with Johnny Marr) and political material (“North Sea Bubble,” “Rumours of War”). Produced by Grant Showbiz (The Smiths, The Fall), with whom Bragg would work on better than a dozen albums, Don’t Try This At Home included contributions by Michael Stipe and Peter Buck of R.E.M. and would subsequently peak at #8 on the UK albums chart. Bragg had re-signed with Go! Records for a million pound advance, so the album was afforded aggressive marketing, music videos, and a grueling 13-month tour after which Bragg paid back the remainder of his advance for his release and rights to his back catalog of music.

After taking a five-year hiatus to help his partner raise their son, Bragg signed with the artist-friendly UK indie Cooking Vinyl for the release of 1996’s William Bloke, which was the artist’s fifth Top 20 charting album. A year later he released Bloke On Bloke, a collection of outtakes and remixes from his previous album that only rose to #78 on the UK chart. Bragg was about to undertake a major career move, however…Nora Guthrie, the daughter of American folk legend Woody Guthrie, asked if Bragg would put some of her father’s unrecorded lyrics to music. The result led to Mermaid Avenue, a critically-acclaimed 1998 album recorded with Americana band Wilco and singer Natalie Merchant (of 10,000 Maniacs) that would earn a Grammy® nomination. 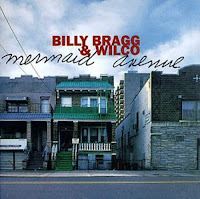 Mermaid Avenue, Volume II was released in 2000 and a third collection in 2012, along with Mermaid Avenue: The Complete Sessions, released to mark Guthrie’s centennial. An argument about the mixing of the first album created a rift between Bragg and Jeff Tweedy of Wilco, which led to the singer putting together a new band, the Blokes (including legendary keyboardist Ian McLagan of the Faces), to tour in support of the albums. The rise in right-wing nationalism in Great Britain inspired Bragg’s England, Half-English album, which was named for a book by British writer Colin MacInnes. Recorded with the Blokes and released in 2002, England, Half-English tackled such sticky issues as racism and xenophobia in the UK. Bragg published his first book, The Progressive Patriot, in 2006, expressing his belief that British Democratic Socialists could reclaim patriotism from right-leaning nationalists.

In 2007, on the fifth anniversary of Joe Strummer’s death, Bragg founded the non-profit Jail Guitar Doors organization. Taking its name from a Clash song, the organization supplies musical instruments to prisons and encourages prisoners to face their problems in non-confrontational ways. An American chapter of Jail Guitar Doors was launched in 2009 by the MC5’s Wayne Kramer. Also named for a book by MacInnes, Mr. Love & Justice was recorded with the Blokes and released in 2008, peaking at #33 on the UK albums chart. Bragg began branching out beyond music, playing a small role in the 2008 film A13: Road Movie and later wrote new lyrics for “Ode to Joy” from Beethoven’s Ninth Symphony which was later performed by the London Philharmonic Orchestra. Bragg was involved with the 2010 play Pressure Drop at the Wellcome Collection museum and library, providing new songs and performing with his band. That year he was also asked to curate the Leftfield state at the Glastonbury Festival, which he has continued in subsequent years. 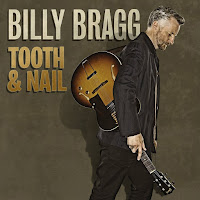 Bragg returned to the studio in 2013, recording Tooth & Nail with musician and producer Joe Henry, the album exploring the Americana genre and becoming his most commercially-successful work since Don’t Try This At Home, peaking at #13 on the UK chart. The album led to Bragg being honored with the “Trailblazer Award” at the first Americana Music Association UK event in London in February 2016 and the “Spirit of Americana Free Speech Award” later that year at the Americana Music Association US event held in Nashville. In between these accolades, Bragg released a collaboration with Joe Henry titled Shine A Light: Field Recordings From the Great American Railroad, which was recorded during a trip by train between Chicago and Los Angeles. The record was modestly successful and would become Bragg’s ninth Top 30 charting album in the UK.

Bragg published his second book in 2016; a history of the British skiffle movement titled Roots, Radicals and Rockers, the book traces the genre from its beginnings in the 1950s back to American folk, blues, and jazz music. A year later, Bragg released the six-song EP Bridges Not Walls with the new political song “Full English Brexit.” Record Collector magazine described the EP as “a solid gold collection of an always inspiring singer-songwriter finding inspiration in the actions of others.” In 2019, Bragg released the two-disc, 19-song collection The Best of Billy Bragg at the BBC 1983-2019 which offers a career-spanning retrospective of the singer-songwriter’s on-air performances. Bragg also published his third book, The Three Dimensions of Freedom, in 2019, a political collection that posits that accountability is the antidote to authoritarianism. 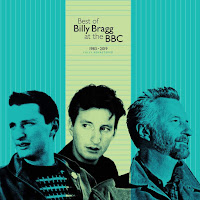 Throughout his lengthy career, Billy Bragg has fought to bring humanism back to British society in the face of growing social injustice and right-wing nationalism. Both with his personal activism and through his art, Bragg has continued to shine a light on the plagues of fascism, racism, sexism, xenophobia, and homophobia which has often brought him in conflict with far-right groups like the British National Party (DNP). Undaunted, Bragg continues to work towards “the great leap forwards.”