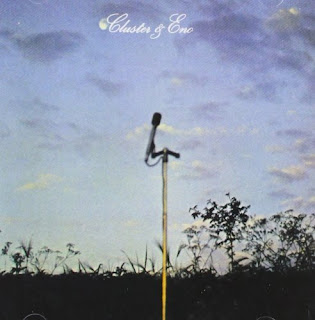 More musically adventurous than his Roxy Music bandmates, Brian Eno left that successful British band and struck out on his own in 1973 to follow his own unique musical vision. Although he would later build a significant body of solo work, become the superstar producer of bands like U2 and the Talking Heads, and record groundbreaking collaborations with artists like Robert Fripp, David Bowie and David Byrne, one of Eno's first stops along the road to fame and fortune was in Germany.

Fascinated by the conceptual possibilities of ambient music – one of many logical endpoints for the fledgling art form of electronic music during the mid-70s – Eno would team up with the duo of Dieter Moebius and Hans-Joachim Roedelius for a series of albums that, while not earthshaking in their scope and ambition at the time, have nevertheless crept into the shared consciousness of popular music over time to become influential pieces of the puzzle that is Eno's wonderfully enchanting canon of work.
Eno's first collaboration with the two members of Cluster would be released in 1977 as Cluster & Eno. By the time of the album's release, Eno had already made his first forays into creating ambient music with the release of 1975's Discreet Music and the recording of Before and After Science, which included Cluster in the studio. His first album with Moebius and Roedelius, however, an entirely instrumental affair, would serve to define the boundaries of ambient music and then shatter them. Utilizing a series of set pieces – loosely-structured songs, really – the three visionary artists experimented with various found sounds and instrumentation, studio wizardry and the electronic synthesis of sound. The resulting mix of musical styles, instrumentation and sonic manipulation flows from your speakers like watercolors on a canvas. Cluster & Eno is a challenging and invigorating listen, with fragments of the album's compositions blending, chameleonlike, into the background (Eno's vision of ambience) while others jump up from the grooves to grab you by the ears and demand your attention.

Although the trailblazing electronic experimentation by Eno, Moebius and Roedelius, as well as other fellow travelers like Klaus Schulze would later become the foundation of prog-rock and, much to our dismay, the keystones of both techno and new age music, at the time of this recording, this was revolutionary work, weird in both its ambition and its execution. Recently reissued on CD for the first time, Cluster & Eno deserves a listen by any music lover interested in this essential touchstone in the evolution of electronic music. (Water Music, reissued 2005)
Review originally published by Alt.Culture.Guide™, 2005
Buy the CD from Amazon.com: Cluster & Eno's Cluster & Eno
Posted by Rev. Keith A. Gordon at Friday, August 21, 2020