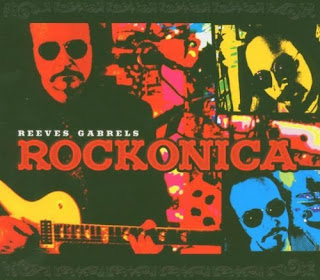 Longtime David Bowie foil and session gunslinger-for-hire Reeves Gabrels isn't a well-known name, even among guitar fanatics...though he should be. Besides recording and performing alongside the legendary rocker for most of the '90s, Gabrels has also turned in admirable session work with a diverse range of artists like Ozzy Osbourne, Public Enemy, the Cure and the Mission UK. Although his solo recordings have been few and far between, with several years spanning each effort, Gabrels' third album – Rockonica – should be the one that puts his name on the rock 'n' roll map for good.

Whereas on previous albums Gabrels would call in favors from famous frontmen like Bowie or the Cure's Robert Smith to provide vox on his songs, with Rockonica the axeman truly flies solo without a net, handling most, if not all the singing chores. It's not surprising to say that his vocals aren't half bad, his soulful Yankee drawl working well with the material. Sure, he's no Bowie, but Gabrels' voice does bring a bounce to his lyrics, with a cadence that is reminiscent of Wayne Kramer's early solo work. This is no coincidence, I'm sure, since Kramer drummer Brock Avery is on board, providing a rhythmic, Motor City edge to the songs (especially on "Underneath," which quotes quite liberally from the Kramer playebook).

It's all academic, really, since Rockonica is, first and foremost, a showcase for Gabrels' enormous skills. A vastly underrated guitarist often overlooked in the music media's rush to crown a new "guitar god," Gabrels is a hard rock instrumentalist with an avant-garde heart. Think of a cross between Johnny Thunders and Robert Quine and you're probably in the right ballpark. Gabrels' material cuts across stylistic barriers and genre considerations, the six-string maestro mixing straight-ahead rock riffs with taut leads that unwind like a runaway spool of razor wire. Angular, prog-flavored song structure, heavy metal thunder and jazzy, free-form improvisational soloing are blended together with incredible phrasing, unmistakable tone and breathtaking dynamics.

Gabrels is no string-shredder like Zakk Wilde or fretboard racer like Joe Satriani and Steve Vai. Reeves Gabrels is an entirely different creature, an experimental musician whose powerful performances and instrumental wizardry don't get in the way of having a good time. The ten-minute "Anywhere (She Is)," for instance, offers more twists and turns than a mountain road while "The Conversation" starts out big and blustery, like prog-rock run amok, before settling into a minimalist soundtrack with odd time signatures and an almost bluesy riff. "Leper" offers some tasty lead work before bouncing into a funky groove of '70s vintage while the lengthy, epic "Long Day" displays just about every weapon in Gabrels' toolbox, from slow, considerate chording to shimmering, hypnotic fretwork.

If you're the type of listener that appreciates skillful guitar playing within a heavy rock 'n' roll background, then Rockonica might just possibly be an album worth looking for. With more experience than today's typically young string-bender, and with a penchant for coaxing just about any damn sound out of his stick, Reeves Gabrels creates music that is intelligent, challenging and, ultimately, rewarding in a way that much of the current corporate chart-fodder fails to achieve. (Favored Nations Records, released 2005)
Review originally published by Alt.Culture.Guide™, 2005
Buy the CD from Amazon.com: Reeves Gabrels' Rockonica