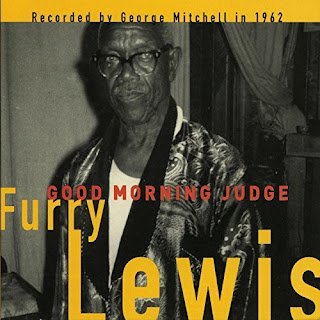 Walter “Furry” Lewis was a fixture on the Memphis blues scene for years beyond count, recording his first songs in the ‘20s, retiring from music in the ‘30s and being rediscovered in the ‘50s. While most of the original country bluesmen had fled the Delta for Chicago, Detroit and other points north, Lewis remained on Beale Street, traveled the Southeast in medicine shows and, along the way, forged a musical legacy that stands up with the greatest artists of the genre. The timing of the release of Good Morning Judge couldn’t come at a better time as it is one of the strongest collections of Lewis recordings that is currently available.

Recorded by producer George Mitchell in Memphis circa 1962, Good Morning Judge offers Lewis in fine form. The opening title cut is hilarious, Lewis stating that “I got arrested once,” and then going on to deny accusations of murder, fraud, forgery, and even loitering, his light-hearted lyrics covering the deadly seriousness of institutional racism, his vocals accompanied by slinky bottleneck guitar.

In fact, much of Good Morning Judge showcases Lewis’ unique and intriguing six-string style, the elder bluesman filling songs like “Blues Around My Bed” and “Roll And Tumble Blues” with spry energy and soulful performances. “Don’t You Wish Your Mama Had Named You Furry Lewis” and “Furry Lewis Rag” revisit these traditional blues tunes with more braggadocio than any hip-hop microphone fiend could muster. A wonderful introduction to the lively wit, musical talent and immense charisma of Furry Lewis, Good Morning Judge should be on the shelf of any serious fan of the blues. (Fat Possum Records, released February 3, 2004)