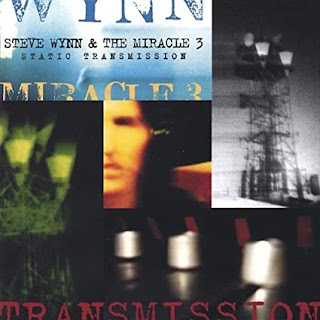 Steve Wynn is one of those greatly underrated artists that critics love, a songwriter and performer of unusual depth and atypical perspective. As founder of ‘80s cult band Dream Syndicate, Wynn spearheaded LA’s “Paisley Underground” movement with feedback-soaked, guitar-driven rock ‘n’ roll that was easily a decade ahead of its time. Wynn’s lengthy solo career has had its ups and downs since his first album in 1990, tho’ it’s been mostly up as of late. Static Transmission, credited to Steve Wynn & the Miracle 3, represents another solid effort of what could be called, for lack of a better term, “psychedelic folk music.”

The tunes on Static Transmission feature Wynn’s imaginative songwriting and wan vocals, blending folk sensibilities with ‘60s rock influences and ‘80s punk attitude. “Candy Machine” is a fuzz-drenched story-song with beautifully chiming guitars and muddy sound complimented by a melodic hook; the song belongs on modern rock radio, where it would force many bland rock wannabes back to their day jobs. A percussive guitar riff transforms into a slinky, psychedelic wall of sound on “Amphetamine,” a rocking road song with explosive six-string work and unrelenting energy.

The hyperbolic instrumentation that introduces “One Less Shining Star” leads into a shimmering dirge of sound and obscured vocals while “Hollywood” cuts like Bob Dylan, or maybe Dan Bern, providing a gutsy look at California’s famed city of dreams. Truth be told, there’s not a bad song to be heard on Static Transmission, Steve Wynn & the Miracle 3 delivering one of the year’s best, if sadly obscure, rock albums. (DBK Works, released June 24th, 2003)