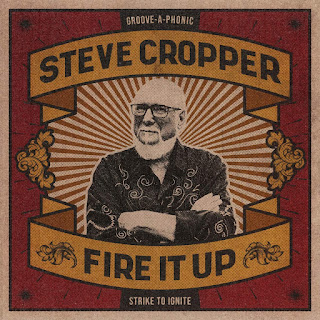 If he did absolutely nothing else to close out a lengthy career that has now spanned some seven decades, singer, songwriter, and guitarist Steve Cropper’s musical legacy would be carved in stone for his tenure with Booker T & the M.G.’s and contributions to monster 1960s-era instrumental rock ‘n’ roll hits like “Green Onions,” “Hip Hug-Her,” “Groovin’,” and “Soul Limbo.” As the Stax Records house band, Booker T & the M.G.’s also backed legendary R&B artists like Otis Redding, Carla Thomas, Sam & Dave, and Eddie Floyd. Cropper’s guitar talents have featured prominently on albums by artists as diverse as Roy Orbison, Wilson Pickett, John Lennon, Leon Russell, and Rod Stewart and his songs have been recorded by folks like Redding, the Rascals, Cher, Glen Campbell, Eric Clapton, and Mitch Ryder, among many others.

As a producer, Cropper has helmed albums by Redding (most notably the posthumous classic The Dock of the Bay), Buddy Miles, Poco, Tower of Power, Ramsey Lewis, and John Prine. Cropper’s languid Southern drawl and on-screen charisma stood out even when playing against larger-than-life figures like John Belushi and Dan Aykroyd in The Blues Brothers movies, and the guitarist would tour the globe with one version or another of the Blues Brothers Band for decades. In spite of his enduring influence on rock star guitarists like Eric Clapton, Jeff Beck, and Keith Richards, Cropper never enjoyed the sort of solo career that he deserved as a talented musician, songwriter, and producer. He’s recorded sporadically, enjoying a string of critically-acclaimed and influential albums dating from 1969’s With A Little Help From My Friends and 1981’s Playin’ My Thang to 2011’s Dedicated (A Salute To the 5 Royales).

Steve Cropper’s Fire It Up


The aforementioned name-dropping aside, Cropper has never been an artist content to sit on his laurels, nor to ride on the coattails of other talents. For Fire It Up, Cropper’s first solo effort in a decade, the guitarist enlisted a tight-as-a-fist band comprised of singer Roger C. Reale, drummer Nioshi Jackson, and multi-instrumentalist Jon Tiven, who handles bass, keyboards, and horns. None of these guys are exactly household names, although Tiven was an acclaimed music journalist before becoming a full-time musician, songwriter, and producer. All are talented cats, though, and they provide the perfect instrumental foundation for Cropper’s stunning six-string skills. Case in point: the album-opening “Bush Hog, Part 1,” a short but funky strut of an instrumental that displays some of Cropper’s finest chicken-pickin’ riding high atop a strong rhythmic backdrop.

The album’s title track is a gritty, Southern-fried rocker that perfectly frames Reale’s growling, gruff vocals against a soundtrack that mixes rock ‘n’ roll bravado with a Stax soul heartbeat; Cropper’s fretwork stands out from the grooves, as does Tiven’s nuanced but essential harp-play. The blue-eyed soul gem “One Good Turn” was co-written by the Rascals’ Felix Cavaliere, who provides subtle keyboard washes to the song, Reale’s emotional vocals accompanied by some timely blasts of saxophone. The mid-tempo “Out of Love” treads unabashedly onto Curtis Salgado’s soul-blues turf, Cropper lightning up the performance with his imaginative and varied fretwork while “She’s So Fine,” co-written by Bad Company’s Paul Rodgers with Cropper and Tiven, is the sort of ramshackle R&B rave-up suitable for the Blues Brothers.

“Two Wrongs” is a sort of rock-infused, late 1960s/early ‘70s R&B construct that helps showcase the depth of Reale’s vocal talents, his performance here reminiscent of the great Otis Redding while “Heartbreak Street” is the sort of narrative soul that Stax Records superstars Sam & Dave cut their teeth on. The song’s deep emotional undercurrent is pumped-up and magnified by Reale’s turbo-charged, emotional vocals. “The Go-Getter Is Gone” is a tasty soul-drenched rocker, a brassy song that demands a larger-than-life performance from everybody involved, and it works in creating a real liver-quivering foot-stomper of a song. “Bush Hog, Part 2” leads into the lengthier, album-closing “Bush Hog,” a shimmering and buzzing instrumental throwback to the mesmerizing music of Booker T. & the M.G.’s, bringing Cropper full circle, as it were.


Steve Cropper’s guitar skills are unassailable, informed as they are by 60+ years of blues, soul, and rock ‘n’ roll. Tiven, too, is a talented musician whose contributions to these songs (and the album’s production) are paramount in achieving the sort of rock ‘n’ soul fusion I imagine the two men had in mind. Cropper’s Fire It Up is a helluva lot of fun, an entertaining album guaranteed to bring back memories of a simpler, more joyful era of rock ‘n’ soul music. Grade: B+  (Provogue Records, released April 23rd, 2021)

Buy the album from Amazon: Steve Cropper’s Fire It Up

thanks for the kind words, we had a blast making it