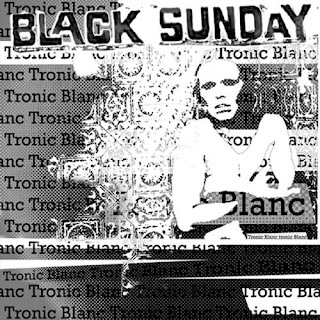 Down around Memphis way, on a bluff high above the mighty Mississippi River, Alicja Trout is a one-woman, rock ‘n’ roll wrecking crew. An artistic triple-threat, Trout is an accomplished musician, an insightful producer and a successful independent businesswoman running her own Contaminated Records label and Tronic Graveyard recording studio. Trout earned her indie street cred as the guiding light of the Lost Sounds, a critically acclaimed art-rock outfit with garage-rock sensibilities; she’s since gone on to experiment in different musical avenues with bands as diverse as MouseRocket and the River City Tanlines. Don’t be fooled, however – as disparate as these bands may seem, they are nothing but different faces of the same brilliant artist.

Black Sunday has been billed as Trout’s first post-Lost Sounds project but in reality, like most of her work, it’s been a work in progress. Collecting tunes written and recorded from 2002 until 2004, Tronic Blanc is a perfect representation of Trout’s many different talents. She performs most of the instrumentation on the album, with friends adding drums or guitar to a handful of songs. More impressive, however, is that Tronic Blanc tends to incorporate a wider range of Trout’s songwriting interests than any of her other bands that I’ve heard.

From the new wavy, Gary Numan-influenced electronic paranoia of “This Heart Is Now Aluminum” to the hook-laden ‘80s pop stylings of “Next Girl Detour,” Trout experiments across the board with different sounds on Tronic Blanc. Although the results vary from song to song, Trout’s talents tie them all together and provide a continuity that is tough to achieve over a multi-year timespan. Most of Tronic Blanc skews towards electronic-tinged synthpop, although a few cuts – like the hard-rocking, guitar-driven “Torture Torture” – would be perfectly at home alongside many Victory Records “screamo” bands, albeit less abrasive and with more visible intelligence. “Good Dreams” is an interesting art-rock instrumental, classical piano layered above an electronic drone that would make Klaus Schulze green with envy.

Simply put, Alicja Trout is one of the most interesting and intelligent musicians working on the indie circuit today. Perhaps because Trout’s home base is Memphis she doesn’t get the ink that coastal-based indie artists garner. Her relative isolation from the industry has also insulated her from the battering winds of changing musical trends, allowing Trout to follow her own muse. Black Sunday’s Tronic Blanc delivers thought-provoking music, challenging without being heartbreaking, entertaining, intelligent and ambitious. Between Alicja Trout and her friend Greg Cartwright’s band the Reigning Sound, these two artists are making some great music in the Bluff City. (Dirtnap Records, released June 14th, 2005)