Archive Review: John Hiatt & the Goners' Beneath This Gruff Exterior (2006) 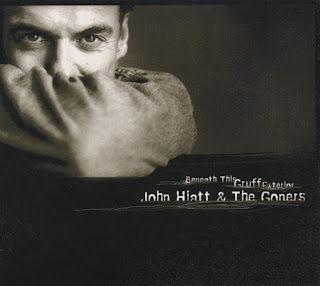 As a recording artist, John Hiatt has never achieved much more than cult status. He has never sold a lot of records; certainly not as many as other artists have recording Hiatt’s songs. Over the course of almost thirty years, however, Hiatt has forged a career of quiet excellence, creating nearly twenty consistently solid albums and writing hundreds of remarkable songs that lesser talents will be recording for decades to come. Entering his fourth decade of writing and performing, Hiatt epitomizes the spirit of rock ‘n’ roll, and if he never makes the Hall of Fame, it will be that institution’s loss.

Hiatt’s Beneath This Gruff Exterior is another fine effort on the part of the underrated songwriter and his top-notch band the Goners. For those unfamiliar with Hiatt’s creative “modus operandi,” he pens literate songs that are peopled with brilliant characters – losers and lovers, the lost and the redeemed. Hiatt’s rough, soulful vocals are kind of like a frayed blanket, scratchy and worn but warm and familiar. The music is a mix of roots-rock, Memphis soul, Delta blues, country, and folk, which is why Hiatt’s material lends itself so well to various interpretations. Beneath This Gruff Exterior showcases both Hiatt’s songwriting skills and the road-worn chemistry of the Goners. Hiatt is not a bad guitarist, but he smartly steps aside and lets maestro Sonny Landreth fill his songs with whiplash slide work and a hint of bayou swamp-rock instrumental gumbo. The seasoned rhythm section of bassist Dave Ranson and drummer Kenneth Bevins keep an admirable beat beneath the festivities so that the magician Hiatt can weave his lyrical tales.

The radio-ready "The Nagging Dark” rolls along like the runaway hearts of the song’s characters while “Circle Back” remembers the fleeting nature of friendships and family and the passage of time. “Almost Fed Up With the Blues,” fueled by Landreth’s red-hot picking, is a brilliant anti-blues blues song, the protagonist sick and tired of being sick and tired. Hiatt’s imagery on “The Most Unoriginal Sin” is nearly the equal of vintage Dylan, Landreth’s shimmering fretwork creating an eerie atmosphere behind Hiatt’s somber vocals, the song’s star-crossed lover doomed before the first chorus strikes. Beneath This Gruff Exterior may not be the hall-of-fame caliber talent’s best album, but it doesn’t fall far from the top. (New West Records, released December 15, 2006)

Buy the CD from Amazon.com: John Hiatt’s Beneath This Gruff Exterior