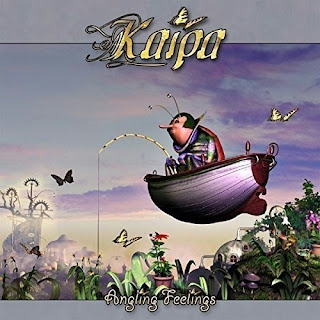 Relatively unknown in the states, even by fanatical prog-fan standards, and criminally unheralded by any critical benchmark, Sweden’s Kaipa has nevertheless been a Scandinavian musical institution for almost three-and-a-half decades. Formed in 1973 by guitarist and songwriter Hans Lundin, Kaipa provided a teenaged Roine Stolt with his first major band experience before forming prog-rock legends the Flower Kings during the ‘80s. The ‘70s-era Kaipa recorded a handful of albums for Decca that sold well for their time, and the band’s musical stock would continue to grow beyond its ostensible demise in 1982, subsequently influencing a generation of European musicians.

After an eighteen-year hiatus during which Lundin continued to make music and Stolt achieved a measure of fame and acclaim at the helm of the Flower Kings, Kaipa reformed in the year 2000. The band would find an entirely different prog-rock landscape in the new millennium. Although remaining a relatively small cult genre within the immense world of rock ‘n’ roll, prog-rock’s status and reputation had grown during the ‘90s, especially in Europe, and its influence could be felt in both mainstream rock and heavily in altering the direction of contemporary heavy metal. No longer overshadowed by hardcore punk, “nerf metal” and grunge, “prog” has enjoyed over a decade of increased sales and growing audiences that thirst for a transcendental musical experience.


Since its reformation in 2000, Kaipa has released three studio albums, but it is with its ninth and most recent, Angling Feelings, that the band has cemented its place among the greats of progressive rock. First of all, Roine Stolt’s fingerprints are nowhere to be found hereabouts. Leaving the band to pursue his other numerous musical projects (including the wonderful solo album Wall Street Voodoo and various Flower Kings’ releases); Stolt is no longer a creative part of Kaipa. In many ways, this is a good thing – regardless of Stolt’s immense talents, his departure allows Kaipa to cast aside his shadow and pursue new musical directions.

No doubt, the band chases after some bold new musical thoughts with Angling Feelings, reinforcing their reputation as one of the most creative, energetic and invigorating outfits on the prog-rock landscape. With the addition of new guitarist Pers Nilsson (Scar Symmetry), composer and group leader Lundin has a new tool to work with, and he utilizes Nilsson’s considerable talents with remarkable results. The songs on Angling Feelings are built upon the normal prog architecture: the familiar keyboard flourishes, spry rhythms, sporadic interspersed vocals, and the electric improvisational nature of the music itself.


With Angling Feelings, however, Lundin and band have expanded Kaipa’s sound – there are many passages that sound downright jazzy, mostly those featuring Aleena Gibson’s seductive vocals. Patrik Lundstrom (Ritual) provides the vocals for most of the material here, his warm voice and soaring vocals playing well off of Gibson’s breathless phrasing. There are elements of traditional Swedish folk interlaced within the songs, as well as hints of world music influences. “Broken Chords,” for instance, builds upon a simple, island-influenced rhythm with shimmering guitar and keyboards and Lundstrom’s strident vocals. “The Glorious Silence Within” dances out of your speakers like a sprite at Renaissance faire; the song’s intricate weaving of delicate instrumentation matched by an upbeat tempo and performance, with delightful vocal harmonies building a joyful chorus.

“Path of Humbleness” begins with an ethereal, far-away sounding intro leading into Gibson’s haunting vocals and a quiet cloud of instrumentation before filling out with a unique mix of Celtic traditionalism and soulful keyboard riffing. The title cut kicks off with a Wakeman-esque keyboard wash before descending into a maddening, chaotic clash of instrumentation and vocals that has its roots in the ‘70s-era sound of King Crimson but its feet firmly in the firmament of contemporary prog expectations. The song provides Nilsson with an excellent showcase, his nimble fretwork and trembling tone adding a vital new aspect to Kaipa’s sound, different from, but just as valuable as Stolt’s previous contributions.


Whether you’re a fan of classic prog-rockers like Yes and Genesis or modern generation prog bands like the Flower Kings or Pallas, you’ll find a lot to like about Kaipa. If you’re a new fan recently discovering the joys of the prog genre, Kaipa’s Angling Feelings is a good place to begin your journey. With superb musicianship, charming vocal harmonies and imaginative song craftwork, Kaipa has successfully incorporated sounds both old and new, building a bridge between the ‘70s and the ‘00s. Enchanting and electrifying, Angling Feelings represents both the overwhelming potential and the very best aspects of contemporary progressive rock. (Inside Out Music, released 2007)