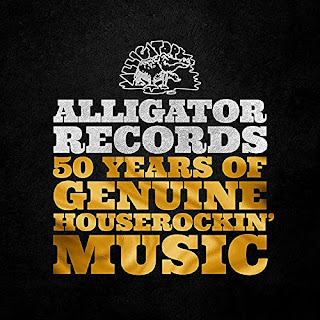 Alligator Records celebrates its 50th anniversary this year – no mean feat for a staunchly independent label – and they have good reason to be proud. The Chicago-based label has released a lot of great music in the five decades since that first Hound Dog Taylor record, and Alligator’s catalog of over 300 titles features some of the best and brightest roots ‘n’ blues artists that have traveled the backroads of America. 50 Years of Genuine Houserockin’ Music is budget-priced (three discs for under $30) anniversary box set offering up a whopping 58 songs and nearly four hours of music, taking the listener for an entertaining stroll through the label’s storied history.


Disc one includes legends like the aforementioned Mr. Taylor (whose “Give Me Back My Wig” defined the label’s mission statement of “genuine houserockin’ music”); the great Koko Taylor (whose “I’m A Woman” puts Muddy in his place); and skilled guitarslingers like Albert Collins, Roy Buchanan, Fenton Robinson, and Johnny Winter, who explore a variety of styles. You’ll also find harp maestros Big Walter Horton and James Cotton, and much-beloved artists like Son Seals, Lonnie Brooks, Luther Allison, and Saffire – The Uppity Blues Women. Throw in some blues-rock jams by the Paladins, and honky-tonk piano-pounding by New Orleans legend Professor Longhair and you have a nearly-perfect 18-track album.

If that’s not enough to get yer motor revving into overdrive, disc two will melt your brain with incendiary tracks from talents like the late, great Michael “Iron Man” Burks, the always-rowdy Little Charlie & the Nightcats, and more harmonica wizardry from masters like Carey Bell and Billy Boy Arnold. Disc two showcases the label’s incredible diversity, mixing songs from soul-blues outfits like the Holmes Brothers and the Kinsey Report with performances by great singers like Janiva Magness, Mavis Staples, and the underrated Katie Webster. The legendary “Steady Rollin’” Bob Margolin is represented here, as are talented cats like Kenny Neal and Joe Louis Walker, and lesser-known but influential artists like Corey Harris and Michael Hill. Throw in some classic Zydeco from C.J. Chenier and a track from the innovative blues-rock outfit the Siegel-Schwall Band, among other fine performances, and you have 21 red-hot tunes that will torch your stereo speakers with pure flamethrower blues…

Still not enough for ya? Man, you drive a hard bargain…how ‘bout disc three and 21 houserockin’ tracks from skilled bluesmen and women like Marcia Ball, Billy Branch, Toronzo Cannon, and Roomful of Blues. There’s no shortage of skilled fretburners like Tinsley Ellis, Christone “Kingfish” Ingram, Selwyn Birchwood, and Coco Montoya to be found, and bands like Lil’ Ed & the Blues Imperials, the Nick Moss Band (featuring the extraordinary harp player Dennis Gruenling), Rick Estrin & the Nightcats, and Tommy Castro & the Painkillers are among the most popular (and hardest-working) blues gangs haunting your local juke-joint these past few years. Shemekia Copeland and Curtis Salgado are two of the most talented blues singers on the scene today, and you can’t overlook legends like Elvin Bishop, Charlie Musselwhite, and Guitar Shorty.


Altogether, 50 Years of Genuine Houserockin’ Music does a great job of documenting a half-century of Alligator Records’ irreplaceable and invaluable contribution to American music. The three-disc set includes a 40pp color booklet and provides the listener a veritable roadmap of the evolution of roots ‘n’ blues music over the past five decades. It’s a great sampler of the wealth of talent the label has to offer, and if you pick up this box set and don’t immediate order a dozen or so discs from the featured artists, I have to seriously question your taste in music…maybe you’d be happier with a shiny new Justin Bieber album? For the rest of us, there’s nothing but “genuine houserockin’ music” on the menu. Kudos to Alligator founder Bruce Iglauer and his staff for this incredible musical milestone! (Alligator Records, released June 18th, 2021)

Buy the CD from Amazon: 50 Years of Genuine Houserockin’ Music