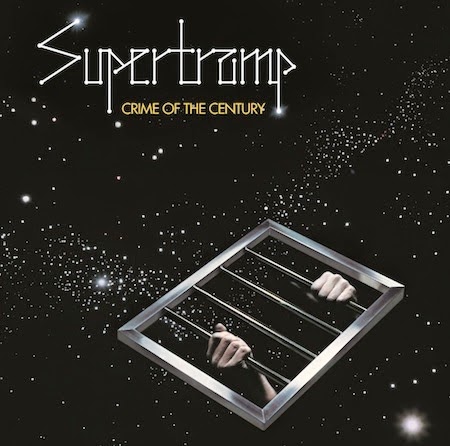 Supertramp’s third album, Crime of the Century, was essentially the work of a brand new band. Formed in 1969 by keyboardist and singer Rick Davies, Supertramp originally enjoyed financial support from a Dutch millionaire and, after scoring a deal with A&M Records, the band recorded a pair of art-rock albums for the label that were released in 1970 and ‘71. Mixing progressive rock virtuosity with British pop sensibilities, the two records served more as a showcase for the individual band member’s instrumental skills than as a true creative statement. Neither album sold particularly well so when their benefactor withdrew his patronage, Supertramp essentially broke up.

Davies and fellow founding member Roger Hodgson (vocals, guitar) worked to put together a new Supertramp, recruiting American drummer Bob C. Benberg from pub-rockers Bees Make Honey, and making Dougie Thomson, who had already been substituting on bass, a full-time member. Thomson brought in his former Alan Bown Set bandmate John Helliwell (saxophone) and what is today known as the classic Supertramp line-up was formed. This was the band that would record Crime of the Century with producer/engineer Ken Scott, who had worked previously with the Beatles, David Bowie, and Pink Floyd. Whereas previously Davies and Hodgson had written songs together, the widening gap in their interests and lives spurred them to begin writing individually, resulting in a glut of material.

Supertramp’s Crime of the Century


The band entered the studio with a surplus of great songs, many of which would end up on subsequent albums. Crime of the Century tempered the band’s previous overt progressive tendencies with more of a pop-rock sheen. Although the new players were every bit as talented as the earlier members (if not more so), the complex songs were less a display of instrumental virtuosity than they were careful constructs of sound melody. Producer Scott pushed the band to think outside of the box and utilize the studio as an instrument in itself, and to incorporate non-traditional sounds into their songs. Not that Supertramp entirely abandoned their prog-rock proclivities – the album’s opening track, “School,” is somewhat the best of both worlds, featuring lush instrumentation and extended musical passages alongside its pop melody.

The album’s second single, “Bloody Well Right,” was indicative of the band’s new direction, showcasing a more muscular, hard rock sound with proggy overtones that depended on Hodgson’s imaginative fretwork and the song’s distinctive chorus. The addition of Helliwell’s soulful sax playing fleshed out the song’s minimal lyrics and helped catch the ears of U.S. audiences, which sent the song into the Top 40. By contrast, the album’s other single release – Hodgson’s “Dreamer” – didn’t chart at all stateside but rose to #13 in the band’s U.K. homeland. It’s a whimsical performance, Hodgson’s lofty vocals assisted by Davies’ busy, insistent keyboard line. The vocal harmonies weren’t dissimilar to what Queen was doing at the time, but the song’s syncopated rhythms and ethereal vocals help create a mesmerizing listening experience.

If Everyone Was Listening


If Crime of the Century is remembering today entirely on the basis of “Bloody Well Right” and “Dreamer,” that would be legacy enough, but there are plenty of other strong songs on the album that many band members consider Supertramp’s creative pinnacle. Davies’ subtle piano flourishes on “Hide In Your Shell” mimic melodic themes he uses throughout the album, tying all the songs together as a single related composition. The song’s instrumentation is somewhat proggy and artful, often working at odd angles to the vocals, resulting in a breathtaking performance. Ostensibly the protagonist behind the album’s loosely-conceptual lyrical themes of loneliness and alienation, “Rudy” provides a showcase for Davies’ fluid keyboards, the song’s jazzy undercurrent and Hodgson’s biting guitar solos providing a counterpoint to the frequently minimalist instrumentation, at times placing an emphasis on the lyrics and at other times serving to create a moody ambience.

Hodgson’s “If Everyone Was Listening” is the album’s most orchestral track, its swelling instrumentation and busy arrangement sounding not unlike Dark Side of the Moon era Pink Floyd. Davies was a far different piano player than Rick Wright, however, his flailing ivories adding a much more atonal, almost improvisational-jazz styled vibe to the song, an idea that is only bolstered by Helliwell’s flashes of mournful sax. Benberg’s drumming is superb here, not so much keeping time as in providing instrumental support to the often fey effects of the accompanying strings and melancholy piano. The album’s title track is a minor classic in itself, its construction also in a Pink Floyd vein, orchestral passages creating a stark ambience with the occasional jolts of piano, sax, or guitar, while its raucous shouted vocals pre-date Roger Waters’ The Wall by several years. 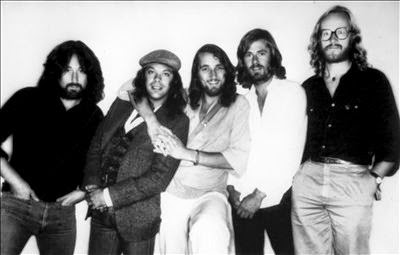 Live At The Hammersmith Odeon 1975


The “deluxe” 2014 reissue of Crime of the Century includes a bonus disc that documents a March 1975 performance by the band at the Hammersmith Odeon. Just as Supertramp had collaborated with producer Ken Scott to create a new sonic paradigm in the studio, the band’s management worked with electronics experts to create an innovative sound system to properly reproduce the band’s complex music in a live setting. The results speak for themselves, as the Hammersmith Odeon performance sounds every bit as crystalline and aurally engaging as the original album itself. The live set begins with the first four songs from the album, expanded a bit, perhaps, from the LP versions with a little more instrumentation, but nothing too ostentatious, the band pretty much recreating the album tracks with the addition of small, interesting instrumental flourishes.

Supertramp veer off course by the fifth song, however, the band drawing upon the material they had stockpiled to deliver a taste of their upcoming album, Crisis? What Crisis? Featuring four songs from that album, which would be released in late 1975, the new songs don’t stray that far from the sound the band had crafted for Crime of the Century. “Sister Moonshine” offers up some nice vocal interplay, the arrangement highlighted by Davies’ gentle keyboard runs while “Lady,” the lead-off single from the 1975 album, is a nifty pop triumph with lively vocals and keyboards. The odd man here is “A – You’re Adorable,” a 1940s-era pop song that was a hit for Perry Como and Jo Stafford, spoken/sung here by saxman Helliwell, who provides muted, slightly-crooning vocals above Davies’ discordant piano. The band closes out the live set with the four remaining songs from Crime of the Century, highlighted by the title track, which is provided a stunning instrumental performance.


Crime of the Century was considered Supertramp’s commercial breakthrough, the album yielding a pair of minor hit singles in what was an increasingly album-oriented rock ‘n’ roll world. The album rose as high as #38 on the U.S. charts on its way to Gold™ Record status (for 500,000+ copies sold) while it hit a lofty #4 on the charts in the U.K. It was also somewhat of a worldwide success, charting Top 10 in Canada and Germany and Top 20 in Australia and France while also developing a following in the Netherlands. More importantly, Crime of the Century provided the band with a musical blueprint that, although it would take two more modestly-successful albums to perfect, would emerge at the end of the decade with Supertramp’s 1979 smash hit LP Breakfast In America.

The creative tensions and lifestyle differences that had pushed Davies and Hodgson to become individual songwriters also provided Supertramp with a fascinating complexity and dichotomy of sound that transcended the band’s prog-rock roots to bring something uniquely exquisite in its stead. Although Supertramp is often denied the respect and admiration provided contemporaries like Yes, Pink Floyd, or Genesis, their influence can be heard today in like-minded prog-pop outfits like Spock’s Beard and the Flower Kings. From humble beginnings, Crime of the Century pushed Supertramp onto a world stage and cemented the band’s considerable musical legacy. Although this 40th anniversary reissue of the album lacks any studio outtakes, the addition of a live disc and an illustrated booklet with well-written (and extensive) new liner notes should prompt fans to upgrade their old CDs. Grade: A- (A&M Records, released September 1974, reissued December 2014)

Buy the CD from Amazon.com: Supertramp's Crime of the Century (40th Anniversary Deluxe Edition)
Posted by Rev. Keith A. Gordon at Sunday, January 18, 2015

Dear sir, you are a little bit mistaking in here, in Supertramp each singer accompanies himself either on the piano or the guitar, Rick Davies is always playing wurlitzer (electric piano) or grand piano while singing his extraordinary songs (rock, progressive, rythm & blues or ballads), Roger Hodgson accompanies himself on the 12 strings, the piano or the wurlitzer.
Thank you
Yann Darses
Montreal QC