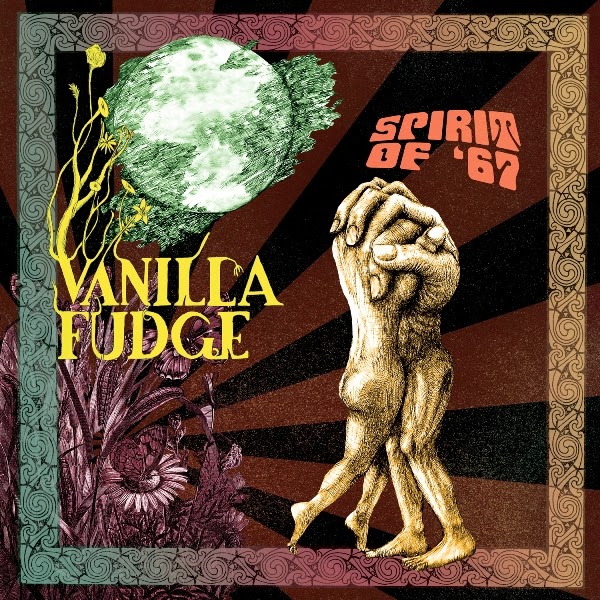 Vanilla Fudge holds a special place in the history of rock music. Emerging from the mid-1960s psychedelic hard rock scene that also boasted of bands like Iron Butterfly and Blue Cheer, the NYC foursome developed a truly unique, HEAVY sound that would influence bands like Deep Purple and Uriah Heep, and echoes of the low ‘n’ slow Fudge style can even be heard in the production work of late Houston rapper DJ Screw.

On March 3rd, 2015 Vanilla Fudge will release Spirit of ’76 on Purple Pyramid Records (an imprint of Cleopatra Records). Featuring ten cover songs that were popular during the “Summer of Love” – the year the band released its debut album – along with one original number written by founding member Mark Stein, Spirit of ’76 is the band’s first new album since 2007’s Out Through The In Door.

The original Vanilla Fudge, consisting of singer and keyboardist Mark Stein, guitarist Vinny Martell, bassist Tim Bogert, and drummer Carmine Appice, came to the attention of legendary product George “Shadow” Morton, who was taken with the band’s slowed-down, sludge-drenched cover of the Supremes’ hit “You Keep Me Hangin’ On.” The band recorded the song with Morton producing, which scored them a deal with Atco Records (an Atlantic label subsidiary), and their subsequent self-titled 1967 debut album.

That album rose to number six on the Billboard albums chart on the strength of the band’s original take on popular songs by the Beatles, Sonny Bono, Curtis Mayfield, and Rod Argent. Slowing down each song’s tempo, layering in a rich brew of Stein’s Hammond keyboards and Martell’s stinging guitar, and backed by the sludge-like stew of Bogert and Appice’s mesmerizing rhythms, the album struck a chord with young rock fans. Morton would go on to produce the band’s next two albums, both of which went Top 20, but the further the band strayed from that initial plodding approach to cover tunes, the more their commercial returns diminished, and Vanilla Fudge after the release of their fourth album, Rock & Roll.

Spirit of ’76 represents a return to that legendary psychedelic soul-tinged Vanilla Fudge sound. The album features the talents of most of the original band members – bassist Tim Bogert retired in 2011, to be replaced by Pete Bremy, who played with Appice in a recently reunited Cactus. In a press release for the new album, Appice says that Spirit of ’76 is “the best album we've done since our very first album, with great vocal arrangements and instrumental performances from everyone in the band.” Mark Stein adds “Spirit of ’76 is a record that I'm proud of. The success of Vanilla Fudge has always been based on our interpretations of songs by great artists. Our style of classic and symphonic rock lives large on this effort, and the performances and arrangements I would hope will be enjoyed by old and new fans alike.”

We have the full track list below, Spirit of ’76 featuring imaginative re-makes of classic tunes like the Box Tops’ “The Letter,” the Spencer Davis Group’s “Gimme Some Lovin’,” the Monkees’ “I’m A Believer,” Buffalo Springfield’s “For What It’s Worth,” and Procol Harum’s “Whiter Shade of Pale.” Guitarist Vinny Martell says “Spirit of ‘76 is the continuation of the journey we began in the Summer of Love – psychedelic, rhythmically powerful arrangements and performances of happening tunes of that era colored by the insight and vision of who we are today.”

Stein’s “Let’s Pray For Peace” is the album’s only original song which, he says, “is about a vision I had that came to me suddenly as if my supreme being was speaking through me…what if all of us could stop for a moment, as naive as it may sound to some, and say: 'who'd like to share, a little silent prayer, let's pray for peace tonight’.”

Unlike a lot of reunited 1960s-era bands, Vanilla Fudge’s members have been busy playing music since their first break-up in 1970. Bogert and Appice formed the beloved blues-rock outfit Cactus with former Mitch Ryder guitarist Jim McCarty and Amboy Dukes frontman Rusty Day, releasing four albums between 1970 and 1972; reuniting for a pair of Cactus studio albums and several live performances in 2006. Bogert and Appice formed a power trio with guitarist Jeff Beck in ’73, scoring a Gold™ album with the self-titled Beck, Bogert & Appice album in 1973.

Bogert and Appice backed up a literal “who’s who” of popular music throughout the 1980s and ‘90s, including Rod Stewart, Leslie West, Bo Diddley, and Pat Travers, among others. Mark Stein stayed busy as well, touring and recording with artists like Dave Mason, Tommy Bolin, and Alice Cooper before Vanilla Fudge re-formed in 2000. The band will be touring in support of Spirit of ’76, so watch for a Vanilla Fudge show near you!