The Pretty Things’ Bouquets From A Cloudy Sky Box 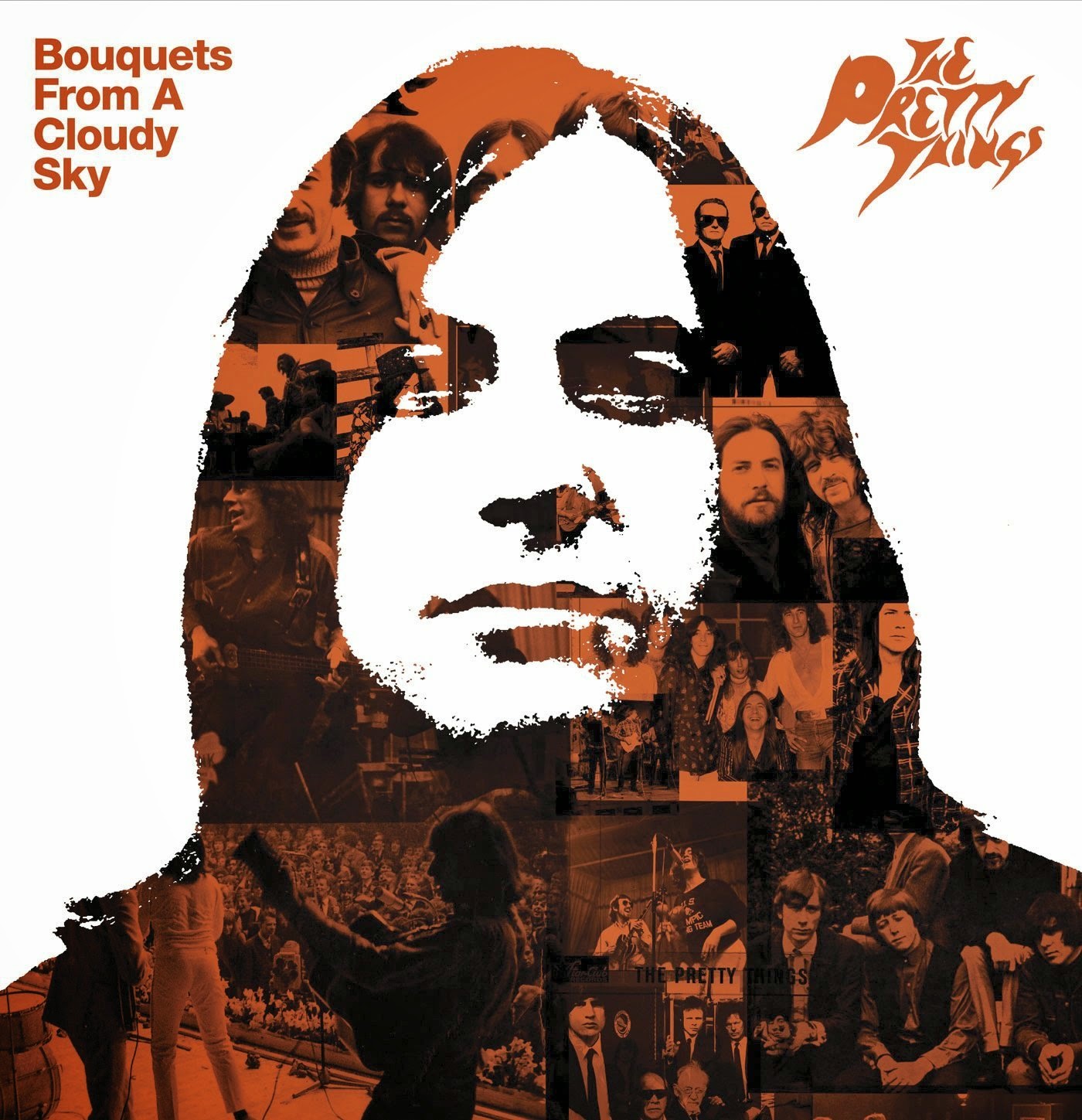 This is one that hasn’t gotten a lot of press from the mainstream music rags, so we thought we’d shed a little light on a mighty fine box set comin’ your way – The Pretty Things’ Bouquets From A Cloudy Sky. The legendary rockers are getting the full deluxe treatment in commemoration of the band’s 50th anniversary, and it’s only gonna set you back around $200 (if you buy the box from the good folks at Ugly Things zine).

“So,” you ask hesitantly, “what do I get for my pair of hunnies?” Bouquets was produced with the Pretty Things’ approval and input, and features all eleven of the band’s studio albums, including 2007’s often-overlooked Balboa Island, all packaged in gatefold digi-sleeves and including a whopping 42 bonus tracks. Two additional “rarities” discs offer up 45 previously-unreleased demos, alternate takes, live recordings, and outtakes while two DVDs feature a new documentary, Midnight To Six 1965-1970, plus S.F. Sorrow Live at Abbey Road, additional videos, and band interviews.

The Bouquets box also includes a 10” replica acetate that features the full-length demo for “Defecting Grey,” the studio version of “Turn My Head,” plus a pair of previously unreleased Pretty Things songs. Throw in an illustrated 100-page hardback book with a comprehensive Pretty Things history written by musician/music historian Mike Stax of Ugly Things (who named his zine after the band and knows from whence he speaks on all things ‘Pretty’), plus lots of rare photos and a complete band “family tree.”

You’ll even a “court case history” with excerpts from the legal files compiled by the band in their fight to regain the rights to their master recordings and songs. The box finishes up with an art print by singer Phil May; one lucky Pretty Things’ fan will find the original copy of the print, which has been randomly placed in one of the boxes. Overall, Bouquets From A Cloudy Sky has everything a collector or new fan might desire, and the box will be limited to 2,000 copies only. 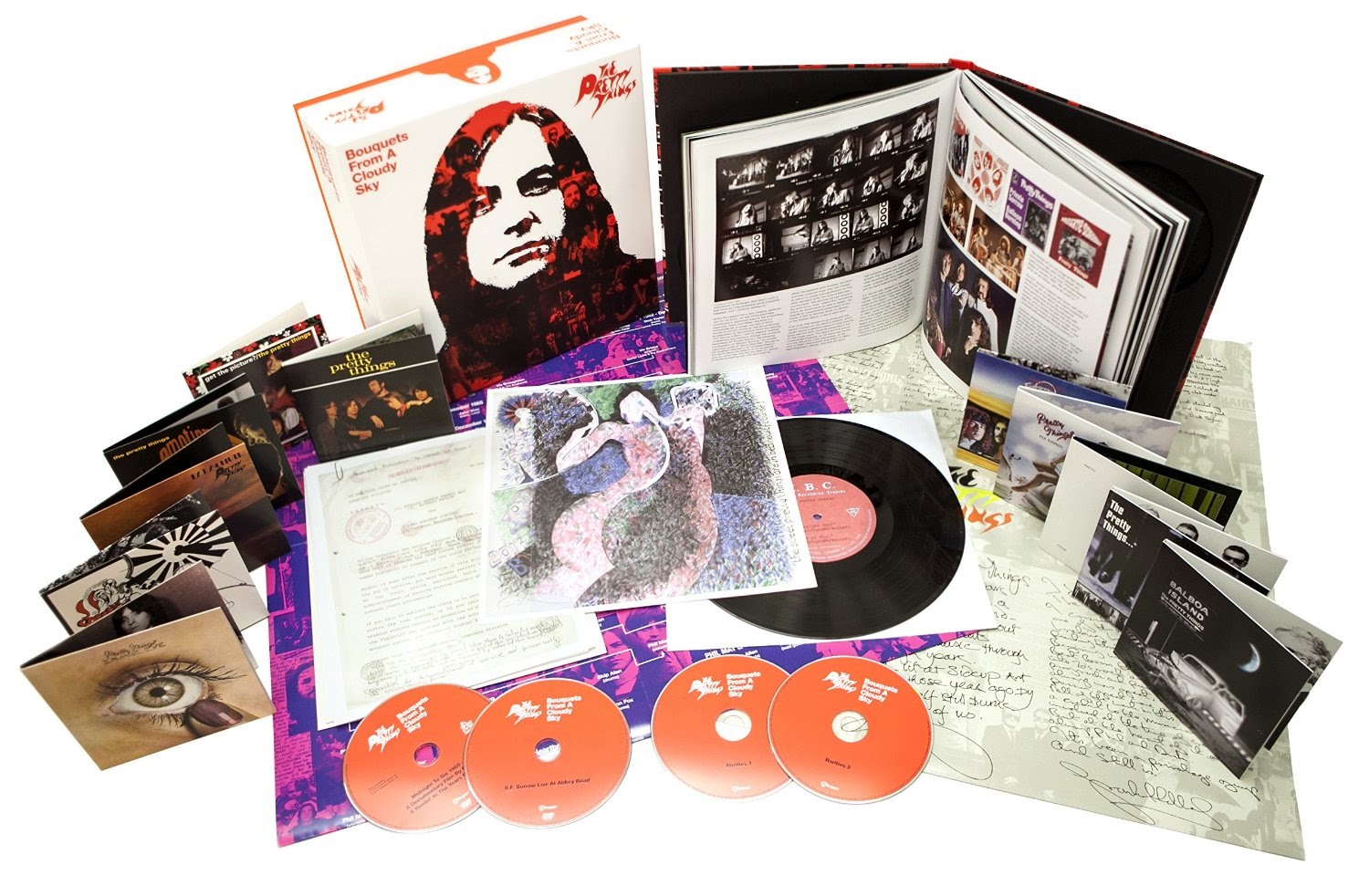 The Pretty Things were formed in London in 1963 by guitarist Dick Taylor (who was the original Rolling Stones bassist) and singer Phil May, along with rhythm guitarist Brian Pendleton, bassist John Stax, and drummer Pete Kitley. The band would run through various members through the years, including notorious drummer Viv Prince, Twink (from the Pink Fairies), and Jack Green (from T.Rex), and Taylor would leave the band in 1969. But they scored hits with their first three singles – “Rosalyn,” “Don’t Bring Me Down,” and “Honey I Need,” and the band’s self-titled 1965 debut rose to number six on the U.K. charts before subsequent efforts experienced diminishing commercial returns.

The Pretty Things never scored a hit stateside, but they’ve had a loyal following that has only grown through the years, partially because of Mike Stax’s proselytizing on their behalf. The band has a musical legacy as strong as any of their peers, however, and stronger than most bands from the era. Their 1965 debut is an undisputed classic of British blues-rock; their conceptual 1968 album S.F. Sorrow is widely considered one of a handful of essential psychedelic-rock albums; and several of their 1970s-era recordings – Parachute (1970), Silk Torpedo (1974), and Savage Eye (1976) – earned significant critical acclaim even while selling only moderately.

If you’re a classic rock aficionado unfamiliar with the charms of the Pretty Things, Bouquets From A Cloudy Sky is a great way to get up to snuff!
Posted by Rev. Keith A. Gordon at Friday, February 20, 2015