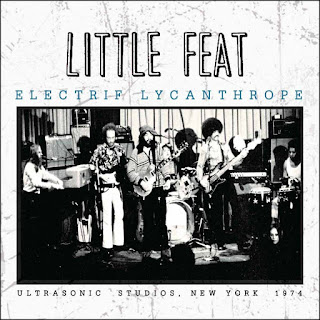 Little Feat never achieved the sort of commercial success expected of its overwhelming critical acclaim. Formed in 1969 by Mothers of Invention alumni Lowell George (guitar, vocals) and Roy Estrada (bass) with George’s friend Richie Hayward on drums and pianist Bill Payne, Little Feat released a half-dozen studio albums and a live set during their ten-year run. In spite of developing a brilliant mix of rock ‘n’ roll, blues, boogie, R&B, country, and funk music that today would be considered “Americana,” the band built a loyal, albeit small following with their raucous live performances, but they enjoyed little commercial success. No single Little Feat album charted until 1974’s Feats, Don’t Fail Me Now (peaking at #36) and Waiting For Columbus, their double live 1978 LP, proved to be the band’s only true hit (rising to #18 on the charts).

Electrif Lycanthrope was the first Little Feat bootleg LP that I ever saw, and I quickly snatched up a copy at a Detroit record show around 1980. The original vinyl version, released by The Amazing Kornyfone Record Label sometime in the late 1970s, featured nine songs taken from a live September 1974 radio broadcast on WLIR-FM in New York City, with the band performing at The Ultrasonic Studios in Hampstead NY, a common venue for these live-to-radio performances. Electrif Lycanthrope wasn’t Kornyfone’s first Little Feat bootleg – they released a number of other Little Feat titles, including Beak Positive (a fine 1975 show) and Aurora Backseat (documenting a 1973 show) – but it’s widely considered by the Feat faithful to be the best of the band’s handful of bootleg albums.


Aside from its original vinyl release by TAKRL, Electrif Lycanthrope was available for a short time during the 1990s as a dodgy “European import.” This new CD reissue of the album includes three additional “bonus tracks” for a total of a dozen red-hot performances, and while I can’t speak as to the legality of this particular release, it seems to be part of a series of live recordings trickling out of either WLIR-FM and/or The Ultrasonic Studios (check out the great recent Bonnie Raitt and Lowell George release, Ultrasonic Studios 1972). Regardless of its origin, or how long it may or may not be available to buy, Electrif Lycanthrope offers a simply mesmerizing performance by the band in a casual, laid-back environment that allowed them to stretch out and display their tremendous musical chemistry.

Fat Man In The Bathtub 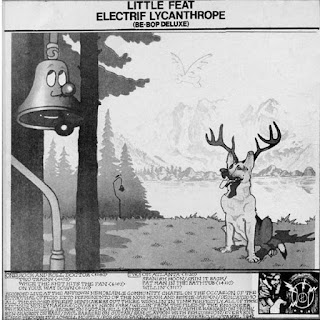 A cover of the great Allen Toussaint’s “On Your Way Down,” from Dixie Chicken, is provided an additional minute here for the band to shows off its instrumental chops, beginning with Payne’s church revival piano intro and the syncopated rhythms provided by Hayward’s steady, hypnotizing drumbeats. George’s reverent vocals here display a different facet to the man’s talents, his equally nuanced fretwork providing an additional dimension to the classic song as the band chimes in with backing vocals. George’s breathtaking solo three minutes in underlines the subtlety of the band’s performance. A fan favorite, “Spanish Moon” showcases both the band’s harmony vocals behind George’s spry performance, but also his sultry guitarplay and a strong rhythmic backdrop provided by the band’s often overlooked other guitarist, Paul Barrere. Payne’s keyboards are dominant here, offering a fine counterpoint to George’s guitar.

“Fat Man In The Bathtub” is another longtime crowd pleaser, and here it offers a look into the band’s evolving New Orleans blues and R&B influences at the time. With a cacophonic instrumental backdrop that incorporates plenty o’ Crescent City funk, the performance provides plenty of foot-shufflin’ moments amidst its seemingly free-form jam. The popularity provided George’s “Willin’” may have become a bit of an albatross around the singer/songwriter’s neck, but this gentle, affecting reading – based around George’s weary voice and acoustic guitar, and Payne’s subtle piano – proves the strength of his lyrics and performance. Of the three additional tracks included on this CD reissue of Electrif Lycanthrope, the band’s signature “Dixie Chicken” fares the best, the song’s ramshackle arrangement providing plenty of space for Payne’s nimble piano-play and George’s rowdy notes.


If you’re a hardcore Little Feat fan, you may already own Electrif Lycanthrope in one of several formats, but if you don’t, you really should grab up a copy of this CD while you can. If you’re a newcomer to the band, or simply “Feat curious,” this live recording provides an excellent introduction to one of rock ‘n’ roll’s best – yet criminally unsung – outfits. The recording captures the band at the pinnacle of its chemistry, cranking out songs from what are arguably two of their three best studio albums in front of a token audience, but playing like they’re headlining an arena.

The sound quality here is amazing considering the relatively primitive recording technology of the era, although it does get a little muddier on the last three songs, which may have been taken from a second-generation tape. Many fans prefer Electrif Lycanthrope to the authorized live set Waiting For Columbus, which is widely considered one of the best live rock albums of all time. Why argue over semantics? Get ‘em both and revel in the joy that was one of the era’s most dynamic and electrifying live bands! Grade: A (Smokin’ Production, released 2014)

Just got this and it is worth every GD penny and a lot more! The sound quality is just good enough not to distract from the performances, which are amazing. For those folks who complain that Waiting For Columbus isn't a true "live" album and doesn't capture how the band really sounded, listen to this and then tell me that they are not one of the greatest bands ever. If you can do that, maybe you can explain why Kiss is in the Rock and Roll Hall of Fame and Little Feat isn't, as well as what medications you've ingested. This is worth your attention if you have even a fleeting interest in rocking, great-to-boogie-along-with music. Enjoy responsibly!