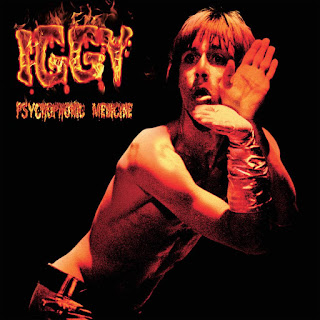 There’s no denying that Iggy Pop is one of the true, bona fide legends in rock music. From his time fronting groundbreaking Detroit noise terrorists the Stooges, and through five decades and counting of an influential solo career, there are few rockers that have made a bigger splash in the R&R gene pool than the Igster.

Amazingly, even after some sixteen authorized solo albums and, at a minimum, an equal number of album releases of, ah…shall we say, “dodgy” provenance…there’s still some fuel in the tank in the way of unheard Iggy Pop recordings. On June 23rd, 2015 the good folks at Cleopatra Records will release Psychophonic Medicine, a three-CD box set comprised of a wealth of rare and unreleased Iggy sides that concentrate on the singer’s vital late 1970s/early ‘80s solo years.

Iggy’s Psychophonic Medicine includes a disc of previously-unreleased studio outtakes and alternate takes from his albums The Idiot (1977) and the vastly underrated Party (1981). The disc includes a pair of songs that have never shown up on any Iggy compilation, anywhere, at anytime – “It’s My Life,” taken from the sessions for Party and “Warm Feelings,” from demo sessions recorded with Steve Jones. The disc offers several songs from the 1985 Jones sessions as well as three songs circa 1983 which were recorded by Ric Ocasek of the Cars.

The other two CDs included with Psychophonic Medicine feature a pair of incendiary live performances. Disc two offers Iggy’s Paris Palace show from 1979 for the first time on CD, a dozen red-hot primal screams that include performances of faves like “Cock In My Pocket,” “I Wanna Be Your Dog,” “Kill City” and, of course, “Louie Louie.” Disc three offers Iggy’s often-bootlegged (and appropriately notorious) San Francisco 1981 show, mastered from a newly-discover (and vastly-improved) audio source. That concert performance included such fan favorites as “Lust For Life,” “1969,” and “TV Eye,” a baker’s dozen songs in toto.

Psychophonic Medicine includes a 36-page color booklet featuring rare photos from the archives of longtime Stooges photographer and biographer Robert Matheu, who also wrote the box set’s liner notes. Each of the set’s three discs is packaged in an individual wallet sleeve, and the set includes a bonus track of Iggy’s duet with Bethany Cosentino of Best Coast that was featured on HBO’s True Blood show. Iggy fans, you’re going to want to grab this one up fast ‘cause these sorts of collectors’ wet dreams tend to disappear from the shelves in the blink of a bloodshot eye!