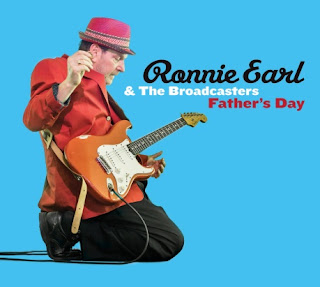 Blues guitarist Ronnie Earl will celebrate “Father’s Day” a little late with the July 17th, 2015 release of his album by the same name, coming to blues fans courtesy of Stony Plain Records. If you’re unfamiliar with Earl, he’s a phenomenal string-bender who earned his 2014 “Blues Guitarist of the Year” Blues Music Award by touring constantly with his red-hot and rockin’ band the Broadcasters.

Father’s Day will be the ninth album on Stony Plain from Earl and the Broadcasters, and he’s mixed up his typical musical mix for the release. The album includes the first appearance of a full horn section on an Earl album in over a decade, and he’s shaking up his normal instrumental fare with by featuring the talents of a couple of great vocalists – Diane Blue, who has lent her enormously soulful voice to Earl’s material before, and Michael Ledbetter, singer with the Chicago-based Nick Moss Band. Unlike Earl’s previous sparse use of vocalists, Father’s Day features just one instrumental track.

Earl pays tribute to two of his blues mentors on Father’s Day, covering two songs each by the great Otis Rush (“It Takes Time” and “Right Place, Wrong Time”) and Magic Sam (“All Your Love” and “What Have I Done Wrong”). Earl’s stellar fretwork adds a new dimension to the West Side Chicago sound of the original versions. Earl pays tribute to the great B.B. King with “I Need You So Bad,” and flirts with some old-school soul on covers of Brook Benton’s “I’ll Take Care Of You” and Fats Domino’s “Every Night About This Time.” Earl revisits one of his early original songs, “Follow Your Heart,” and adds a pair of new compositions in “Higher Love” and “Father’s Day.”

Much as he has now for a quarter-century, Earl is backed on Father’s Day by his longtime band the Broadcasters – bassist Jim Mouradian, keyboardist Dave Limina, and drummer Lorne Entress. Guitarists Nicholas Tabarias, Tim O’Connor, and Larry Lusignan came into the studio to play alongside Earl, as did the horn section of tenor sax player Mario Perrett and baritone saxophonist Scott Shetler. Fathers’s Day was produced by Earl himself and recorded at Wellspring Sound studio in Acton, Massachusetts.

The album’s packaging includes a photo of Earl’s father reading a newspaper feature about Ronnie and includes a dedication from the guitarist: “this album is made for my beautiful father, and we came to peace in the end. Don’t ever give up on your family and don’t quit until the miracle happens.” An son who has clashed with their father will easily recognize the sentiment, and Father’s Day promises to be a showcase for the sort of energetic, emotional, and textured guitar playing that has earned Ronnie Earl a well-deserved reputation as one of blues music’s most talented players.