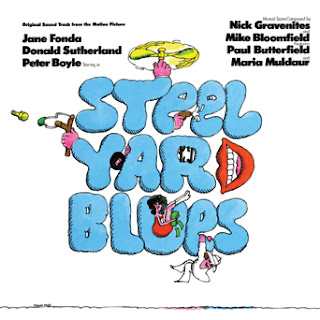 Our friends at Real Gone Music have announced their August release schedule, and it includes some hot titles, indeed! The Reverend’s pick from among the label’s upcoming reissues would be the long-lost soundtrack album from the oddball 1973 comedy Steelyard Blues. Directed by filmmaker Alan Myerson, the film starred Jane Fonda, Donald Sutherland, Howard Hesseman, and Peter Boyle as anti-establishment types trying to get over on the system. Because of its definite anti-war slant (and that of its stars), Steelyard Blues never got half a chance to become a movie blockbuster.

Even more unlikely than the movie was the soundtrack to Steelyard Blues which, to the best of my knowledge, received only sparse distribution in 1973 and has never been reissued on CD. Which is a damn shame, really, ‘cause the film soundtrack features a slate of original songs created by Chicago bluesmen Nick Gravenites and guitarist Michael Bloomfield. While the material was penned to specifically accompany the movie, it stands up quite well on its own, and also includes the talents of vocalists Maria Muldaur and Annie Sampson (from the band Stoneground) as well as frequent Jerry Garcia collaborator Merl Saunders. Gravenites produced the soundtrack and wrote or co-wrote all 14 songs, and it features some of Bloomfield’s best guitar playing. Real Gone will release Steelyard Blues, the soundtrack, on August 7th, 2015. 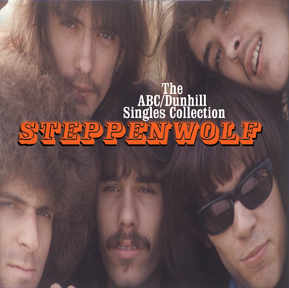 Steppenwolf was the tonic of choice for 1970s-era teens with a thirst for hard rock. Formed in 1967 by members of the Canadian blues-rock band Sparrow – singer John Kay, keyboardist Goldy McJohn, and drummer Jerry Edmonton – Steppenwolf scored its first hit in 1968 with the classic “Born To Be Wild,” taken from its self-titled debut album. Written by former Sparrows band member Mars Bonfire (Edmonton’s brother), “Born To Be Wild” hit #2 on the U.S. charts and launched a string of seven Top 20 albums which would achieve Gold™ Record status between 1968 and 1970.

Strangely enough, although Steppenwolf was considered an AOR band – a status confirmed by its album sales and accompanying FM airplay – they enjoyed significant success on the singles chart as well. Songs like “Magic Carpet Ride,” “Rock Me,” “Move Over,” and “Monster” would all hit Top 40 status and two of the band’s singles (yeah, you can guess which ones…) would sell in excess of one million copies and be featured in numerous movies like Easy Rider and Candy and in TV shows like Miami Vice and Married…With Children. Steppenwolf songs have been covered by artists as diverse as Bruce Springsteen, Slayer, Blue Oyster Cult, and Status Quo, among many others.

These hit singles have largely been unavailable on CD in their original 45rpm mixes, an oversight corrected by Real Gone Music. The label will release Steppenwolf’s The ABC/Dunhill Singles Collection on August 14th, 2015, the two-CD set featuring every A and B-side of every one of the band’s singles for ABC/Dunhill, 38 monster tracks in all, compiled in a set that includes liner notes with John Kay’s comments for each song as well as a number of rare photos. Compiled from the best sources available (legend has it that the original 45rpm mixes of this material were trashed years ago), The ABC/Dunhill Singles Collection showcases the many different facets of an often overlooked classic rock era band remembered, really, for just two songs.