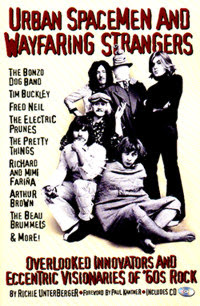 A sequel, of sorts, to Richie Unterberger's wonderful Unknown Legends Of Rock & Roll, the author's Urban Spacemen And Wayfaring Strangers tackles in greater depth the careers of some of the greatest lost musical talents of the 1960s. It is Unterberger's premise, as set out in his introduction, that “more great rock music was made in the '60s than in any other decade,” an argument he sets out to prove with profiles of nineteen creative talents from the era.

I would agree with Unterberger to an extent, but just as there was a lot of great rock 'n' roll cranked out in the sixties, there was more than a decade's worth of pap released as well. Record companies threw almost anything up against the proverbial wall to see if it would stick in the “drug-addled” youth market. Unterberger also states that there was “no other time in which so many rock musicians made fabulous unknown music that did not sell tons of records and remains virtually undiscovered by the general public.”

It seems to me that the advantages of time and perspective have provided the author with a rose-colored view of the decade. Certainly there was (and remains) a lot of undiscovered musical talent from the '60s, but numerous books, videos, CD reissues, websites and fanzine articles have filled in a lot of blanks. I would point to the '80s as being an equally overlooked decade, with many talented artists edging out careers on the fringes of the commercial music world.

Dylan, the Beatles, the Stones, Cream, the Doors, Jimi Hendrix and other familiar music legends dominate any discussion of rock music in the '60s to the detriment of worthy artists such as the Pretty Things, the Remains, Creation, or Nick Drake. Similarly, Bruce Springsteen, Prince, Michael Jackson, and Van Halen overwhelmed pop culture in the eighties, leaving talents like Joe Grushecky, the Long Ryders, Jason & the Scorchers, and the Del Lords, to name a few, as obscure rock 'n' roll footnotes.

These minor disagreements between two critics aside, Urban Spacemen And Wayfaring Strangers is a definite “must-have” for any rock music fanatic. Unterberger's profiles are entertaining and exhaustive, carefully compiled from interviews with the artists, band members, managers, producers and other participants in the respective scenes. As any reader would, I found several of the profiles to be of greater interest than others, particularly those of the Pretty Things, the Fugs, Arthur Brown, the Bonzo Dog Band, and producer Shel Talmy. A few of the profiles I found somewhat below par, chapters on Thee Midniters and Mike Brown being over-extended and somewhat boring. Other chapters cover folks like the Electric Prunes, Kaleidoscope, Dino Valenti and Bobby Fuller.

Overall, however, Urban Spacemen And Wayfaring Strangers is well written, well documented, and an entertaining read. Just as was done with Unknown Legends Of Rock & Roll, this volume also includes a CD with songs from the book's featured artists. Unfortunately, although inflation has raised the price of Urban Spacemen And Wayfaring Strangers when compared to its predecessor, deflation has decreased the number of songs on the CD from the previous tome's even dozen to a mere six. The enclosed CD does include tracks from the Fugs, Bobby Fuller, Richard and Mimi Farina, the Electric Prunes and Thee Midniters however, as well as a rare song from the Poets.

More useful than the CD is Unterberger's habit of including a suggested discography for each artist profiled at the end of the chapter. If the main purpose of a book of this scope is to introduce the reader to new music, then Unterberger has done an admirable job with Urban Spacemen And Wayfaring Strangers. I've already gone out and bought suggested CDs for several of the featured bands that I didn't already have, and I'd be willing to bet that you'll do the same once you find a place on your bookshelf for this important rock 'n' roll history. (Miller Freeman, 2000)