CD Preview: Tommy Castro & the Painkillers’ Method To My Madness 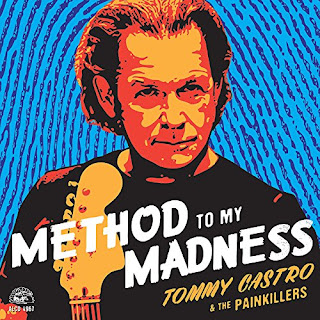 Tommy Castro is one of the most popular bluesmen on the scene today – a six-time Blues Music Award winner, Castro has twice been honored with the coveted “B.B. King Entertainer of the Year” award. Since releasing his debut album for Blind Pig Records in 1996 – by which time Castro had already had better than a decade of experience under his belt, including a stint with Warner Brothers Records band the Dynatones – Castro has recorded frequently and toured non-stop, building a loyal worldwide audience.

Castro signed with the esteemed Alligator Records label in 2009, releasing the BMA winning Hard Believer album. In 2012, Castro scaled back his band to the lean, mean four-piece outfit known today as the Painkillers, which released the acclaimed 2014 album The Devil You Know. In-between these two band releases, Castro oversaw 2011’s Tommy Castro Presents the Legendary Rhythm & Blues Revue – Live!, a collection of raucous live performances from the perpetually sold-out ‘blues cruise’ that features Castro and his band, who also back up stars like Rick Estrin, Michael “Iron Man” Burks, and Joe Louis Walker, among other artists.

On October 23rd, 2015 Alligator Records will release Castro’s latest world-beating album for the label, titled Method To My Madness. A twelve-track collection that features ten new Castro originals or co-writes (including songs penned with pals Rick Estrin and Joe Louis Walker), the album also features covers of the Clarence Carter hit “I’m Qualified” and B.B. King’s “Bad Luck.” Castro is backed by the Painkillers – bassist Randy McDonald, keyboardist Michael Emerson, and drummer Bowen Brown – on an electrifying blend of blues, rock, and soul music that is guaranteed to add extra octane to your tank!

“My main objective when making a new album,” says Castro in a press release for Method To My Madness, “is to do something different from before. I’ve always been a blues guy; it’s what I’m meant to do. But I’m always listening and reacting to what’s going on in the outside world, experimenting with my guitar tone and my songwriting approach to constantly keep my music fresh. In the end, though, my brand is on every song.” The album was recorded at Laughing Tiger Studio in San Rafael, California, with Castro producing for the very first time. The band was recorded without studio gimmicks – just the raw sound of talented musicians cranking out the tunes with passion and energy.

“With the new album,” says Castro, “I was trying to get back to my basic ingredients: blues and soul. I went for the energy of connecting with my band. We kept everything raw, capturing the feeling of playing live. I’m not about being perfect,” he concludes, “I’m about being real.” Having heard this electrifying and entertaining album, I’d say that Castro accomplished what he set out to do with Method To My Madness.

Buy the CD from Amazon.com: Tommy Castro's Method To My Madness
Posted by Rev. Keith A. Gordon at Friday, September 25, 2015