Archive Review: Jello Biafra's In The Grip Of Official Treason (2006) 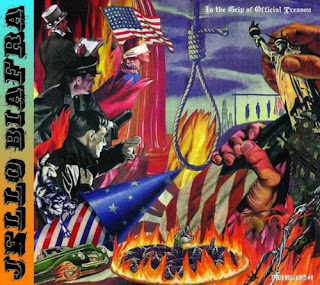 Since President Bush’s popularity has dropped faster than the Titanic what with this whole “morass” thing going on over in Iraq (and, lest we forget, Afghanistan too), a lot of otherwise spineless twits have raised up on their hind legs and started bashing the administration. Big fat hairy deal! It’s easy to kick the man and his friends when they’re down and out; it’s another thing entirely to challenge the powers that be when, like Cagney, they’re “on top o’ the world, ma!”

That’s where Jello Biafra comes in...for two decades and four Presidential administrations, Biafra has been the proverbial fly in the political buttermilk. The former Dead Kennedys’ frontman and punk rock icon has forged an impressive second career as a speaker and social commentator. The Green Party progressive has never been afraid to tackle the big issues, pointing out the hypocrisy and contradictions of public policy regardless of whether it’s the Republications or the Democrats holding the seat of power.

Jello Biafra's In The Grip Of Official Treason


In The Grip Of Official Treason is Biafra’s eight spoken word collection, a massive three-disc set that gathers material from several Biafra performances over the last couple of years. The extended rants on the discs run the gamut of subject matter, from U.S. policy in the Middle East and, of course, the war in Iraq to America’s preoccupation with electronic gadgets and their dehumanizing effect on the social landscape. Biafra’s well-researched commentary and insightful observations are delivered with no little amount of humor, a necessary ingredient to keep the bile from rising up at the harsh reality these stories reveal.

Biafra has often been accused of “preaching to the choir,” that those listeners most likely to pick up spoken word albums like In The Grip Of Official Treason are those who likely already agree with Biafra’s anarcho-leftist worldview. However, I don’t necessarily agree with this criticism. A look at the album’s liner notes shows that pieces like “Punk Voter Rally Cry” and “Die For Oil, Sucker” have been taken from a variety of live performances. From the 2004 “Rock Against Bush” tour stop in Tempe, Arizona to the H.O.P.E. 2006 Hacker Conference in NYC, Biafra is often speaking before audiences that probably don’t hold firsthand memories of the Dead Kennedys. Many of his college-age audience members were still in diapers when Biafra released No More Cocoons, his first spoken word album, nearly twenty years ago.


For many of Biafra’s young listeners, his observations come as a revelation, and the material you’ll find on In The Grip Of Official Treason is no different. The wide range of topics covered by Biafra, all obviously thought out in detail and well documented, is stunning and best swallowed in one-disc doses. Even for someone as well-read as the Reverend, Jello still manages to teach me something that I didn’t already know, opening my eyes to a new reality, however depressing it may be.

The most amazing thing about In The Grip Of Official Treason is that Biafra can still do this gig, that he still holds a glimmer of hope in the face of Democratic betrayal, Republican corruption and corporate greed. Biafra is the punk rock Diogenes searching for one honest man; or maybe he’s the left-wing Paul Revere, warning us of the coming storm. Either way, In The Grip Of Official Treason entertains and enlightens, and if it doesn’t piss you off, you’re just not listening… (Alternative Tentacles, released October 24, 2006)

Buy the CD from Amazon.com: Jello Biafra's In the Grip of Official Treason
Posted by Rev. Keith A. Gordon at Sunday, October 11, 2015