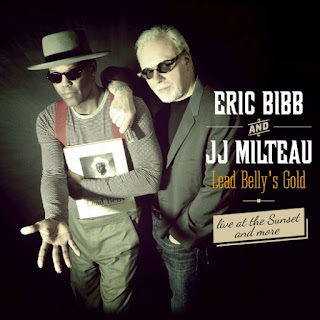 With one foot in the past and his eyes on the horizon, bluesman Eric Bibb is one of the most exciting and innovative artists on the blues scene today. Working with acclaimed French harmonica wizard JJ Milteau, Bibb further fuses blues tradition with a contemporary edge on Lead Belly’s Gold, scheduled for November 6, 2015 release by Stony Plain Records.

In his day, Lead Belly (born Huddie Ledbetter in 1888 in Louisiana), was known as a “songster,” a musical wanderer who would perform a mix of folk, gospel, blues, and ballads – whatever songs might elicit tips from an appreciative audience. Ledbetter was also a skilled and innovative 12-string guitarist, a role taken on by Browne on the new album. Ledbetter’s ability to take a traditional song and interpret it in a way so as to make it his own is a large part of his legacy, and his artistic influence extends beyond blues music (notably Sonny Terry and Brownie McGhee) to folk singers (Woody Guthrie, Pete Seeger, Bob Dylan) to rock ‘n’ roll (Creedence Clearwater Revival, Grateful Dead, the White Stripes – even Nirvana recorded a Lead Belly song).

Lead Belly’s Gold features several classic tunes from the artist’s milieu, including “Midnight Special,” “Good Night Irene,” and “Rock Island Line,” as well as lesser-known Ledbetter gems like “Where Did You Sleep Last Night” and “The House of the Rising Sun.” One of the more intriguing among the new Bibb/Milteau compositions is “Swimmin’ In A River Of Songs.” Writing in the album’s liner notes, Bibb notes, “It’s hard to remember when I first heard Lead Belly’s music because, somehow, he’s always been around. Most likely, I heard recordings of others (The Weavers and Woody Guthrie) singing songs from his huge repertoire before hearing his actual voice…”

Continuing, Bibb adds, “what I hear now, when I listen to Lead Belly’s recordings and YouTube clips, and what I must have sensed when I was a boy, is the man’s personal power and independence. His sound made it clear that he was his own man. The fatalism and resignation that I heard later in the voices of many of my prewar blues heroes was missing in Lead Belly. He was way ahead of his time. The path he cut through a world that conspired to rob him of his humanity, dignity and manhood was a personal triumph that will inspire for generations to come.”

“Lead Belly was a human jukebox,” says Bibb. “He knew hundreds of songs that he’d either heard somewhere and adapted, or written himself. Jean-Jacques and I chose songs from Lead Belly’s vast repertoire that we could make our own. We wanted to pay homage to not only a great musician, but to the rich tradition he embodied. Staying pretty close to his renditions, we had a lot of fun collaborating on these new arrangements.” Check out the video below for a taste of Lead Belly's Gold!