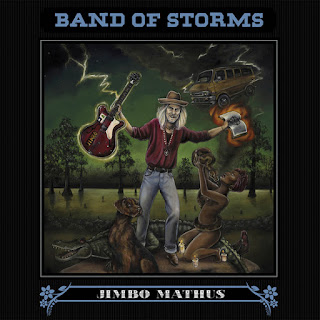 Roots ‘n’ blues artist Jimbo Mathus has certain stayed busy the last few years. Befitting his heightened status as an Americana icon, the talented journeyman has released five solo albums in as many years, including last year’s excellent Blue Healer. Mathus teamed up with his British counterpart Ian Siegal for a 2014 U.K. tour which resulted in the Wayward Sons live album, released earlier this year. And now, courtesy of the good folks at Big Legal Mess and Fat Possum Records, we have Band of Storms, a nine-song Mathus EP that’s available exclusively on glorious black vinyl and as a digital download.

The cover artwork of Band of Storms is by Erika Jane Amerika, the artist capturing the vibe of these songs with her portrait of Mathus standing in a cypress swamp – guitar in one hand and a fiery bible in the other – with an alligator at his feet alongside his Catahoula dog and a snake-handling Yemayá (the “great mother” of Santeria religion). The outsider folk cover artwork of Band of Storms accurately portrays the themes of Jimbo’s songs; musically, clocking in at around 23 minutes, Band of Storms offers Mathus’ typical inspired mix of roots-rock, blues, R&B, honky-tonk country, and outré Americana.


The party kicks off with the strong “Gringo Man,” a lowdown, funky romp with blazing horns courtesy of saxophonist Jim Spake and trumpeter Stu Cole. The song’s boogie-flavored rhythms flow around Mathus’ vocals, providing a swaying backdrop for his thin, piercing guitar licks. The New Orleans blues of “Can’t Get Much Higher” draw upon the legendary Professor Longhair for inspiration, Eric Carlton’s jazzy piano stomp providing a fine counterpoint to Mathus’ twangy, patois-strewn vocals, which would sound right at home blaring from a Bourbon Street juke.

The country-flavored “Play With Fire,” co-written by Mathus with his late friend Robert Earl Reed, is one magnificent bastard of a song. Mathus’ somber, low-register vocals remind of the great Johnny Cash, the song’s brilliant lyrical imagery heightened by the singer’s passion in delivering this sparse tale of “devil may care,” living life to the fullest. The song’s sparse instrumentation is just enough to drive the spike home. Slowing down the pace even further, Mathus’ “Stop Your Crying” is a wayward hybrid of Dylan, the Band, Robert Johnson, and a hundred years of American music. A classic old-school murder ballad with centuries old roots, the song offers slow-burning, Tom Petty-styled vocals with swelling cascades of harmony and dense instrumentation.


A ramshackle sonic assault, “Massive Confusion” is a greasy garage-blues rave-up with a sly nod towards 1960s’ psychedelic rock, the song roaring through your speakers like a freight train rattling down the tracks with double-tap drumbeats and scraped guitar strings that create a head-shaking miasma of sound. “Wayward Wind” is as close to an authentic modern ballad as Mathus gets on Band of Storms, the tune a tumbleweed-strewn lament with gritty, sandpaper vocals and anguished lyrics that come across as more earnest and sincere than one might believe at first blush. The instrumentation displays a slight Celtic influence, and Mathus’ elegantly-wasted fretwork stirs up memories of James Burton’s taut, wiry Telecaster tones.

The sunburned, Delta-flavored “Slow Down Sun” is a deceptively bluesy track, with Mathus’ languid, drawled vocals matched by resonant, rattletrap acoustic git licks and subtle percussion; the sizzling, slow-tempo performance isn’t so much a ballad as a slippery reflection caught in swamp water. The cockeyed and more than a little fractured “Keep It Together” is pure poetry set to clamorous but effective instrumentation with scraps of lovely guitar rising above the fray. Closing the EP, “Catahoula” is a real shit-kicker, with wired finger-pickin’, spry instrumentation, yelped vocals, and at least partially nonsensical lyrics that are delivered with all the brittle energy and unbridled enthusiasm of a 1920s-era jug band, i.e. some real ‘poop-puntin’ music,’ as me dear ol’ grandpappy used to say!


Jimbo Mathus seldom disappoints, and Band of Storms hits all the right notes in its ambitious and masterful exploration of American music forms. Although a bit on the short side – more Jimbo is always better – these songs were built for vinyl, and the EP delivers traditionalist sounds with a contemporary edginess. Kudos to Jimbo Mathus and his crew for another mighty fine record. Grade: A (Big Legal Mess Records, released May 6, 2016)

Buy the EP from Amazon.com: Jimbo Mathus' Band of Storms