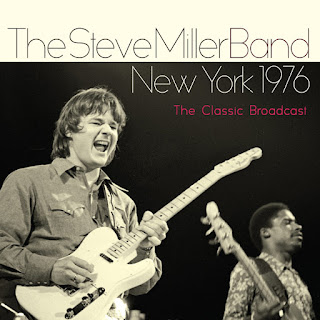 Rock & Roll Hall of Fame inductee Steve Miller – an honor long overdue in my estimation – has been part of the American musical firmament since the late 1960s. Steve Miller Band albums like 1968’s Sailor, 1969’s Brave New World, and 1970’s Number 5 resonated with young FM radio listeners on the strength of Miller’s stellar fretwork and the band’s psychedelic-tinged blues-rock sound. Although Miller stumbled, commercially and critically, with his early ‘70s releases, he found a new world to conquer beginning with his 1973 album The Joker.

With The Joker, Miller began evolving beyond his early psych-blues sound towards a more radio-friendly, rock-oriented direction with that incorporated pop melodies hung on brilliant, guitar-centric instrumentation. Gone were the extended blues jams that bogged down his 1971 album Rock Love; in their place were lively tunes like a jaunty cover of “Your Cash Ain’t Nothin’ But Trash” and the chart-topping title track, which pushed The Joker album to number two on its way to Platinum™ sales status. Miller continued to pursue a similar formula for much of the next decade, albums like 1976’s Fly Like An Eagle, 1977’s Book of Dreams, and 1981’s Abracadabra yielding classic rock hits like “Take The Money And Run” and “Jet Airliner” that still receive steady airplay to this day.


Thanks to the eccentricities of international copyright law, an abundance of “live” classic rock albums are currently being released on CD; many of which use in-studio performances or FM radio broadcasts as their source material. Sonic Boom Records has built a cottage industry on these “copyright protection gap” releases, the Steve Miller Band’s New York 1976: The Classic Broadcast one of the best titles in the label’s catalog.

Touring in support of his Fly Like An Eagle album, Miller and band – which at the time included second guitarist David Denny, bassist Lonnie Turner, keyboardist Byron Allred, drummer Gary Mallaber, and harp player Norton Buffalo – landed in the Beacon Theatre in May 1976 to perform for a live radio broadcast as part of the syndicated King Biscuit Flower Hour. Although this performance was previously released on CD as the second disc of the King Biscuit Flower Hour Presents The Steve Miller Band set, it’s been out of print for over a decade and is well worth reissuing.


If you’re a Steve Miller fan who missed this performance on CD the first time around, you need to cough up the shekels for this reissue ‘cause you missed a hell of a show. Miller opens with an unusual reading of “The Joker,” the band laying down a reggae-styled rhythm behind Miller’s jazzy, laid-back vocals. It’s an odd interpretation of the song (or at least one that I hadn’t heard before), but its languid pace and infectious rhythms are somewhat fitting to the material. Miller pays tribute to his friend and former bandmate Boz Scaggs (who left to launch his own successful solo career) with a sultry cover of Scaggs’ “Baby’s Callin’ Me Home,” from the Children of the Future album.

The song is definitely of its time, trippy with elements of jazz and blues, with Allred’s keyboards and Buffalo’s nuanced harp providing a nice counterpoint to Miller’s subdued guitarplay. “Mercury Blues,” from Fly Like An Eagle, is a cover of the 1948 K.C. Douglas song that offers plenty of Buffalo’s raging harp, Miller’s low-slung guitar licks, and as funky a groove as you would have found in ‘76. Another track from that album, “Wild Mountain Honey,” offers a more whimsical performance, the fan favorite riding on gossamer wings of shimmering guitar notes, mesmerizing keyboard runs, and exotic percussion, with a little raga-inspired fretwork creeping in at the edges near the end.


Miller, of course, performs “Fly Like An Eagle,” the hit introduced with its familiar guitar riff before swimming upstream with a dreamy, acid-drenched performance not unlike “Wild Mountain Honey,” but with more vigor and a radio-friendly energy. Miller’s elegant guitar playing is all over the map, incorporating blues and rock with a jazzy undercurrent to create a trippy miasma behind the song’s bare-bones melody. By contrast, the twangy, up-tempo “Going To The Country” (from Number 5) is pure, Grade A hippie-daze country funk, Miller's “back to the land” lyrics supported by an energetic arrangement, Allred’s joyful piano-pounding, and the guitarist’s lively chicken-pickin’.

The guitarist doesn’t ignore his roots, knocking out a soulful cover of Delta blues legend Robert Johnson’s “Kitchen Blues” that swings with plenty o’ greasy licks, jolts of harp, and shuffling percussion with a hint of boogie-blues rhythm. A powerful performance of “The Window” showcases Miller’s enormous, vastly underrated six-string skills, as well as his strong, soulful vocal abilities, his wavering voice imbuing the song with no little emotion. The song’s haunting instrumentation – led by Miller’s imaginative fretwork – includes Buffalo’s subtle harpwork and some nice drumming by Mallaber. “Song For Our Ancestors” is a five-minute instrumental jam that puts the spotlight on Miller’s talented band, a free-flowing performance that works as both a song as well as a showcase for the individual musicians.


Classic rock fans that only remember Steve Miller from his 1970s and ‘80s-era radio hits have heard but half the story. Miller had a significant career underway (seven albums, four of which charted in the Top 40) before The Joker kicked off a decade of chart hits and Gold and Platinum™ level sales. Miller’s performances during the mid-to-late ‘70s often mixed his earlier, bluesier material with the better-known hits, providing a ‘win-win’ situation for old and new fans alike.

New York 1976 is representative of Miller’s live shows at the time, he and the band seemingly having a great time knocking out a well-balanced set list with broad appeal. The audio quality on CD is pretty good, considering the era, as it was originally recorded and mixed for FM broadcast. Overall, Miller’s New York 1976 is a gem of a recording, a snapshot of the artist in his prime, and a liver-quivering set of songs guaranteed to please even the most diehard Miller fan. (Sonic Boom Records, released January 15, 2016)