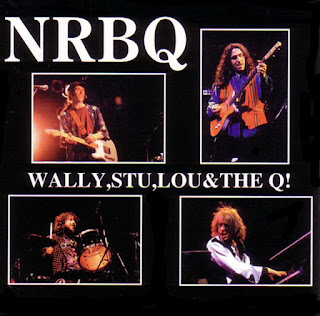 Cover: Single-sided insert front cover has color shots of the four individual band members; the back cover has a single shot of the band along with tracklist and venue information. A minor caveat, however – the band shows show the current NRBQ line-up that includes guitarist Johnny Spampinato; the guitarist at the time of this performance was Big Al Anderson, who spent nearly 20 years with the band before retiring from the road to become a songwriter in Nashville.

Tracklist: I Want You To Feel Good Too • That’s Neat, That’s Nice • North To Alaska • You Can’t Hide • Michael Row Your Boat Ashore • It Was An Accident • Don’t She Look Good • Feel You Around Me •Wooly Bully • RC Cola & A Moon Pie • Music Goes Round & Round •The Dummy Song • I Want You Bad • Stop In The Name of Love • You Are My Destiny • Little Drummer Boy • Me And The Boys • Shake, Rattle & Roll • Captain Lou • Daddy O • Ridin’ In My Car • Things We Like To Do

Comments: Why aren’t these guys in the Rock & Roll Hall of Fame? After all, they kicked out their first sides in 1969, beating the Hall’s 25-year qualifying mark by a good half-decade. They’ve traveled more miles across the United States than a truck driver’s rubber pillow, and they’ve probably played as many shows as any rock band, anywhere. A slew of records, a cult following, a couple of minor hits – isn’t this what rock music is all about? Screw the Bee Gees, I’ve seen the true face of rock ‘n’ roll and it looks a lot like NRBQ.

My ranting aside, the New Rhythm and Blues Quintet has been a part of the American landscape for so long that it’s easy to take them for granted. A talented touring band with a bag of tricks that ranges from roots-rock to blues, jazz, pop, and beyond, NRBQ is the definition of a cult band. All of which makes it quite surprising that the band doesn’t have a larger presence in the shadowy world of tape trading and bootleggers. Although there are a few NRBQ live shows to be found on tape, Wally, Stu, Lou & the Q! is the first that I’ve found on CD. It’s pretty representative of the band and their capabilities, mixing musical genres like nobody’s business.

The disc includes a few minor NRBQ hits such as “RC Cola & A Moon Pie,” the wonderful “I Want You Bad,” the raucous “Me and The Boys,” and one of the best summer romance songs, “Ridin’ In My Car.” Hanging out with the infamous “Captain” Lou Albano a good half-decade before Cyndi Lauper (he even introduced the band this night), the ‘Q’ immortalized the wrestling legend with their rollicking “Captain Lou.” The entire performance here is assisted by the Whole Wheat Horns, who punctuate each song with an indelible brassy signature.

A time-tested NRBQ crowd-pleaser that is captured here is the tradition of “The Box” in which the band takes audience requests, playing whatever they’re asked to. The results can be quite terrifying, as when the band launches into a dreadful rendition of “Little Drummer Boy” or “Stop In The Name of Love” complete with falsetto vocals. Claiming that they “know every song ever written,” it’s a testimony of the Q’s talents that they can pretty much pull off a performance of anything that the audience asks, some covers coming off better than others.

If Terry Adams, Joey Spampinato, Tom Ardolino, and Al Anderson (most recently Johnny Spampinato) never make it into the hallowed halls of Cleveland’s “mistake on the lake,” they can take solace in the fact that they’ve entertained audiences with style and sincerity for over thirty years. Wally, Stu, Lou & the Q! is a fine documentation of just one of over a thousand nights that NRBQ has rocked the house in some cloudy bar, and a welcome addition to any music lover’s library. (Tendolar Records #TDR-138, 71:40 min) 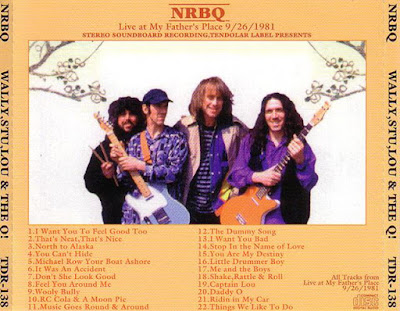