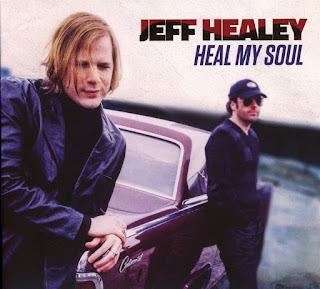 Canadian blues-rock guitarist Jeff Healey’s death in March 2008 – just a couple weeks before the release of his excellent Mess of Blues album – launched a slow-burning reappraisal of the musician’s career. There have been a slew of posthumous releases since Healey’s tragic death at the tender age of 41 years, most of them live recordings or patchwork quilts of live and studio material. Some albums have been authorized by Healey’s estate (i.e. his wife Cristie), but others have not. Heal My Soul is an estate-authorized collection personally curated by producer Roger Costa, in whose capable hands the guitarist’s legacy has been placed.

The back story goes like this – during the last few years of the Jeff Healey Band in the late 1990s, the guitarist wrote and recorded up a storm, creating and archiving better than three dozen songs in a blues-rock vein before dropping out of the major label rat-race to pursue his other passion, old-school jazz music. Although thirteen songs from this tsunami of creativity were releases in 2000 as Get Me Some, the rest of the treasure has sat, untouched, in the archive for almost two decades. Costa culled a dozen of Healey’s best performances, restoring and remixing the original master tapes into Heal My Soul. In doing so, Costa removed any period-specific sounds to better emphasize Healey’s enormous talents, the results sometimes shocking but never unpleasing...


Although Healey’s softer side may be represented further down the album, Heal My Soul kicks off with the explosive “Daze of the Night,” a blues-metal styled track written with Marti Frederiksen and featuring clamorous rhythms, roaring vocals, and molten licks that would sound perfectly at home on any Clutch LP. Healey fronts a traditional power trio here comprised of his former JHB compatriot Joe Rockman (bass) and drummer Dean Glover, which are featured on most of these songs. Healey’s vox rage surprisingly across the track, his high-flying solos soaring above the same ballpark as, say, Randy Rhodes or Jake E. Lee (both former Ozzy fretburners, BTW). It’s a mighty strong performance, and one that will have you looking at Mr. Healey in an entirely different light.

Costa does a masterful job of arranging the sequencing here to keep things interesting, and the party rolls on with “Moodswing,” written by the Toronto-based songwriting collective known as The Phantoms. The song is a rockin’ bit o’ blues-tinged metal-flake that takes the guitarist out of his comfort zone but proves that Healey could shred the steel strings with the best of them. Rather than the blizzard of notes that boxed a listener’s ears on “Daze of the Night,” Healey’s reading of “Moodswing” proffers a darker ambiance, his screeching solos showing a hint of psychedelic madness that is matched by noisy rhythms and, well…‘moody’ vocals that lean in a blues direction, if you know what I mean...


By contrast, “Baby Blue” is the sort of acoustic ballad that helped win Healey a mainstream audience, and he delivers a beautiful performance here, his elegant but subdued fretwork dazzling alongside his rich, multi-tracked vocals and harmonies. Healey does a magnificent job interpreting Richard Thompson’s somber “I Misunderstood,” his vocals dropping into a lower register to mimic the British guitarist’s heartbreaking lyrical voice. Unlike Thompson’s original take, though, which appeared on 1991’s Rumor and Sigh album, Healey channels his own personal emotions through his fingers, bringing an eerie vibe to the guitar lines and making the song his own even while paying tribute to its writer.

“Please,” co-written with fellow six-string maniac Stevie Salas, is another red-hot wildfire, Healey delivering the vocals with a sense of urgency missing among the previous songs. His bluesy, hard-rocking performance shows that he missed his calling – although we blues fans have long respected Healey’s six-string talents, he could have jumped into the hard rock/metal fray and become a true “Guitar God,” putting suckers like Joe Satriani and Steve Vai to shame with the soulfulness inherent in his playing. That said, “Please” is a helluva song, a wall-to-wall sonic assault that will leave you gasping for air and hungry for more.


Firmly back on familiar ground, “Temptation” is the sort of Delta-bred blues jam that Healey has always excelled at; the performance here is pumped up on steroids, with jagged guitar licks reverberating off the kudzu vine while crashing drumbeats capture the rhythms of the swamp these deep blues were born in. Again, this is Jeff Healey as you’ve seldom heard him before, his stunning guitarplay a revelation, slyly mixing hard-times blues with sharp-edged hard rock to create a truly dangerous sound. Although there’s still a familiar six-string Sturm und Drang running as an undercurrent beneath the poppier “Kiss The Ground You Walk On,” the song’s vocal harmonies and plaintive vocals could have earned Healey a 1990s-era radio hit if it had been released.

With sparse instrumentation and Healey’s filigree guitar, “All The Saints” is a hauntingly beautiful performance that places the spotlight on the guitarist’s expressive vocals, which are often overshadowed by his instrumental prowess. The guitar strum is elevated by Healey’s imaginative playing, his emotional vox offering a window to the singer’s soul. Rhythm guitarist Phillip Sayce joins in on “Put The Shoe On The Other Foot,” a funky, strutting bit of R&B swagger that evinces no little energy but lots of instrumental chops. Heal My Soul closes out with the surprising “It’s The Last Time,” a twang-tinged slice of pop-country that dresses up the blues in Nashville finery to fine effect. Healey’s fluid guitar lines bridge the gap between Hank Williams and Robert Johnson, channeling the sad-eyed ghosts of love-gone-wrong in what should have been another massive radio hit for the star-crossed artist.


Because Jeff Healey dabbled in so many musical idioms – pop, rock, blues, old timey jazz – his handful of recordings tend to run the gamut of style and expression. Heal My Soul provides a little of something for almost every Healey fan, no matter what genre and era of the guitarist’s work you may adore. The album offers up a few pleasant surprises and a lot that’s comfortably familiar, with Healey’s charismatic presence, wonderful guitar tone, and timeless talent dominating the grooves. Most of all, the album captures Healey playing as he wanted to play, without label or management interference, the guitarist clearly reveling in the sheer joy of the songs.

If Heal My Soul ends up being the last of Healey’s posthumous releases, he’ll have gone out on a high note; if not, it’s certainly one hell of a collection that displays the man’s enormous – and often overlooked talents – in the very best light. There’s literally nothing I don’t like here, and that’s the highest praise I can give. Grade: A+ (Provogue Records, released March 25, 2016)

Buy the CD from Amazon.com: Jeff Healey's Heal My Soul