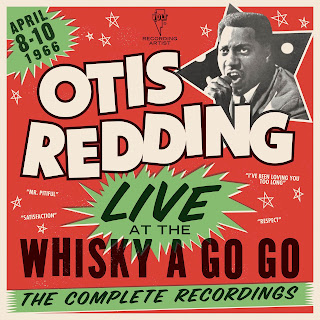 In April 1966, R&B legend Otis Redding delivered three nights of near-mythical performances at the revered Whisky A Go Go club in Los Angeles. The singer was already a soul superstar by this time, his acclaimed third album – Otis Blue – a commercial and critical success that would launch Redding to greater heights. Although portions of Redding’s historic 1966 Whisky performances have been parceled out through the years on a number of albums, beginning with 1968’s In Person at the Whisky A Go Go and most recently with 2010’s Live On The Sunset Strip, the shows have never been collected in their entirety.

On October 28th, 2016 Stax Records will release the massive six-disc box set Otis Redding – Live At The Whisky A Go Go: The Complete Recordings. Documenting all seven sets from the singer’s three-night stand in chronological order, Redding’s performances have been remixed and re-mastered from the original four-track analog tapes. The set captures every show in its entirety, including Redding’s between-song banter, exactly as the singer performed each night. The box set includes a cool poster that mimics the album artwork, and features new liner notes by Los Angeles-based journalist Lynell George and co-producer Bill Bentley.

Although Redding, at the time, had enjoyed a number of R&B chart hits in songs like “Mr. Pitiful,” “These Arms of Mine,” “Pain In My Heart,” and “I’ve Been Loving You Too Long,” the singer had yet to breakthrough to a mainstream (i.e. white) audience. Performing with his nine-piece band for the first time at the Whisky A Go Go – a rock ‘n’ roll club that was instrumental in introducing audiences to bands like the Doors, the Byrds, and Buffalo Springfield – Redding was the first major soul artist to perform on the Whisky stage, opening up an entirely new market for the up-and-coming superstar. A year after his appearance, Redding would be headlining the Monterey Pop Festival, his performance there launching his career into the stratosphere, a trajectory tragically cut short by the singer’s untimely death in December 1967.

Otis Redding – Live At The Whisky A Go Go: The Complete Recordings features all of the above-mentioned hits and more, including great performances like Redding’s spirited cover of the Rolling Stones’ “(I Can’t Get No) Satisfaction,” his original take on “Respect,” “I Can’t Turn You Loose,” and “Chained and Bound.” Although there’s obviously a lot of overlap between sets, there are some unexpected gems here, too, like Redding’s covers of the Beatles’ “A Hard Day’s Night” and James Brown’s “Papa’s Got A Brand New Bag.” Arguably the greatest soul singer of all time, Otis Redding’s legacy is secure, but the release of these 1966 performances in their entirety is a milestone nonetheless.

Update: The release date for the box set has changed to October 28th, 2016

Buy the CD box set from Amazon.com: Otis Redding's Live At The Whisky A Go Go
Posted by Rev. Keith A. Gordon at Sunday, September 18, 2016