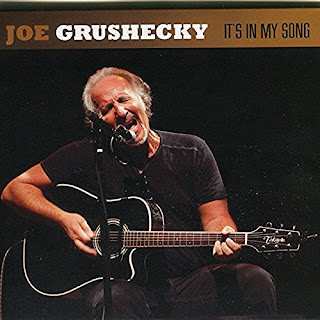 Singer, songwriter, guitarist, and bandleader Joe Grushecky is a legend in his hometown (and mine) of Pittsburgh, Pennsylvania, but if he’s recognized anywhere outside of the Rust Belt, it’s for his collaboration with friend Bruce Springsteen on the Grammy-winning tune “Code of Silence” and/or Grushecky’s American Babylon album (produced by Bruce). Although Joey G. has often been unfairly tagged as the ‘poor man’s Springsteen,’ I prefer to believe that Bruce is just the rich man’s Grushecky…whereas Springsteen has always skewed more towards the pop side of rock ‘n’ roll, Grushecky’s best songs are imbued with the joy and sadness of classic rhythm & blues music.

A blue collar rocker in the vein of Bob Seger or Steve Earle in his early days, Grushecky has earned critical acclaim for his late 1970s/early ‘80s band the Iron City Houserockers, for his sporadic solo work, and for the lengthy list of albums recorded with his longtime band the Houserockers. Still, for all the great music he’s made across the last five decades, and the poetic lyricism he brings to his songs, fame and fortune have constantly eluded this diehard rock ‘n’ roll lifer.

Joe Grushecky’s It’s In My Song


It’s In My Song is a solo acoustic album that shines the light on Grushecky’s underrated songwriting skills by reimagining some of his past classics and framing them with stripped down and, in many instances, more elegant performances. The title track is one of the new tunes penned by Grushecky especially for this set, his sparse guitar strum placing an emphasis on his lyrics and vocals, the song a humorous analogy of the artist’s career as well as the birth of rock music. It’s a clever bit of wordplay with Grushecky’s acoustic guitar bouncing off co-producer and longtime musical foil Rick Witkowski’s six-string counterpoint until Ed Manion’s blastin’ sax strolls into the mix, turning the performance from a folkish story-song to a lively R&B jaunt.

“Dance With Me” is a gem from the first Iron City Houserockers album, 1979’s Love’s So Tough, a slice of blue collar blues co-written with longtime Houserockers bassist Art Nardini. The circular guitar riff is punctuated by the singer’s plaintive harp blasts, his slice-of-life lyrics telling of the power of music to lift one out of their mundane existence, if only for one short dance. “A Fools Advice” is a gorgeous song with heartbreak lyrics and weeping instrumentation, an emotional ambiance enhanced by Bob Banerjee’s mournful violin. Originally a demo inspired by the death of John Lennon, the song featured just Joe and guitarist Bill Toms. It’s fleshed out here with exotic percussion and Banerjee’s hauntingly beautiful violin, Grushecky’s wonderful vocal performance driving home the dual-purpose lyrics which slyly manage to mourn both Lennon and a love lost.

It’s A Hell of A Life


Grushecky is at his best when he’s writing of ordinary people, their dreams and hopes; “It’s A Hell of A Life” is one such tune. A song from 1997’s Coming Home – for my money, Grushecky’s best album – the simple arrangement here of chiming guitars, twangy vocals, and undeniable lyrics spin a yarn worthy of Steinbeck. Dipping deep into the catalog to the second Houserockers’ album, 1991’s Swimming With Sharks, “When The Crows Go Crazy” is an insightful ode co-written by Michael Sweeney. Fueled by Grushecky’s bluesy harmonica, it’s a magnificent tale of rural roots and wanderlust, of the sort of unrequited restlessness felt by so many Americans.

A collaboration between Grushecky and Springsteen, “Homestead” was featured on what is, perhaps, the Houserockers’ best-known album – 1995’s American Babylon – and the song’s Americana vibe is easily translated to an acoustic setting. A spry mandolin lick is doubled by violin on a song that may feature a signature Springsteen melody but the working class lyrics and energetic vocals shine with pure Joey G. magic. From 1992’s End of the Century, “The Silence of Your Arms” is one of Grushecky’s best ballads, a song that drips with Stax soul and romantic yearning with the singer’s breathless vocals perfectly capturing the heat of the lyrics. The brilliant “On The Wall,” from Grushecky’s first true ‘solo’ album – 2002’s Fingerprints – is a haunting reminder of the price of war as the singer puts faces to the names on the Vietnam memorial.

Two ‘bonus tracks’ are tacked onto the end of It’s In My Song, the first taken from what is possibly the best Iron City Houserockers LP, 1980’s Have A Good Time But Get Out Alive! “Rockola” is transformed into a powerful acoustic ballad, the lyrics describing the sort of rock ‘n’ roll lifer that Grushecky embodies, where each night’s performance provides the inspiration to keep truckin’ another day despite the odds. “The Heart Is A Lonely Hunter,” also from End of the Century, provides an upbeat ending to the album, availing itself of Grushecky’s locomotive harp riffs and electrifying guitarplay on a tale of a wandering soul’s search for love, finding it in an unlikely place.


Throughout a career now edging perilously close to the half-century mark, Joe Grushecky has always delivered well-written, entertaining, and deeply-textured music. In my opinion, his output this century rivals or surpasses that of his rock ‘n’ roll peers – albums like East Carson Street, Fingerprints, A Good Life, and Somewhere East of Eden – are easily the equal of anything released by Springsteen, Seger, Dylan, or Fogerty, Grushecky’s closest contemporaries.

The first of three album Grushecky ambitiously plans on releasing in 2016, It’s In My Song is a celebration of all those aforementioned albums, and all the others, this collection a representation of the Grushecky songbook delivered with heart and no little joy by a an artist for which rock ‘n’ roll is more than a fleeting career choice, but rather a way of life. You can’t go wrong with any album released by Joe Grushecky, with or without the Houserockers (and even on the ‘solo’ albums, they’re not far away), but if you need a place to begin your rediscovery of this underrated artist, It’s In My Song is a real treasure. Grade: A (Schoolhouse Records, released February 8, 2016)

Buy the CD direct: Joe Grushecky's It's In My Song
Posted by Rev. Keith A. Gordon at Sunday, September 25, 2016