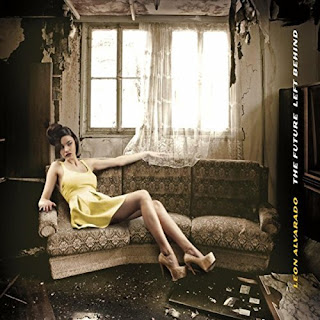 Lest one thinks that rock ‘n’ roll left behind the glorious ‘concept album’ when the clock struck midnight on January 31st, 1979 then look no further than Leon Alvarado’s magnificent The Future Left Behind to refute that misbegotten theory! A fourteen-song concept album with narration interspersed between the gorgeous instrumentation, Alvarado spins a dystopian sci-fi tale of a barren Earth and subsequent emigration to new planets not unlike the European exodus of the late 1700s. A visionary songwriter and keyboardist and a wizard with a synthesizer, Alvarado also has good-enough-for-rockin’ percussion skills that he puts to good use.

Leon Alvarado’s The Future Left Behind


For The Future Left Behind, the follow-up to his 2014 album Music From An Expanded Universe, Alvarado enlisted the help of a couple of Yes alumni and prog-rock fellow travelers in guitarist Billy Sherwood and keyboardist Rick Wakeman. While the musical brilliance that runs like a river throughout the songs on The Future Left Behind display more than a little Yes and Genesis influence, as well as a healthy dose of Wakeman’s epic Journey To The Centre of The Earth, there’s also a little 1970s-style jazz-fusion creeping in around the edges as every influential key-basher from Keith Emerson to Chick Corea is thrown into the musical gumbo pot.

Although Steve Thamer brings an undeniable gravitas to his succinct narration and his role as the story’s protagonist, Alvarado lets the music do the talking on this mostly instrumental song-cycle. “Launch Overture” is reminiscent of Keith Emerson’s early ELP flights of fancy, the music full of hope and brightness, guest Rick Wakeman’s synth solo whizzing and humming like stream-of-consciousness throughout the performance. “Journey Into Space” finds Alvarado and his cohorts in pure ‘70s-era prog-rock mode, soaring synths and blustery drumbeats providing the backbone for an exhilarating instrumental flight through the cosmos worthy of obscure, albeit talented space music composers like Tony Gerber and Giles Reaves.

By contrast, “The Ones Left Behind” is darker, more strident, haunting synthesizer runs and tumbling percussion echoing the emotion and reality of those too impoverished to make the journey to a new life. Sherwood’s piercing fretwork battles with Alvarado’s sonic tsunami to create a powerful, provocative musical moment. The new worlds are no utopia, though, and “Among The Stars” reflects both the promise and the hardship of starting life anew with swells of instrumentation overwhelming the senses while sporadic drumbeats march at a lonely place. The Future Left Behind reasserts the narrator’s belief in the fundamental ability to triumph over adversity, “The Star Seekers” ending the album on as similarly an upbeat note as it began. With hints of ELP and King Crimson lying beneath the surface, Alvarado’s synth-driven score mimics the energy and vitality of mankind’s future saviors...those of us left behind.


If it sounds like the ol’ Reverend is quite smitten with Leon Alvarado’s The Future Left Behind, well, it’s because I am. Seldom have these ears heard as fresh and creative a concept as Alvarado unfolds in his song cycle here, a dreamlike tale obviously inspired by the modern world but daring to take us, as humans, to the next level of evolution. It’s an ambitious album, with fantastical instrumentation and although dominated by Alvarado’s keyboards and synthesizers, never gets tedious or falls to the level of the mundane. I know that a lot of you don’t like any music without a lot of shredding guitars, but fans of prog-rock, jazz fusion and/or avant-garde electronic music will find a lot to love about The Future Left Behind. Grade: A- (Melodic Revolution Records, released July 30, 2016)

Buy the CD from CD Baby: Leon Alvarado's The Future Left Behind
Posted by Rev. Keith A. Gordon at Sunday, September 18, 2016