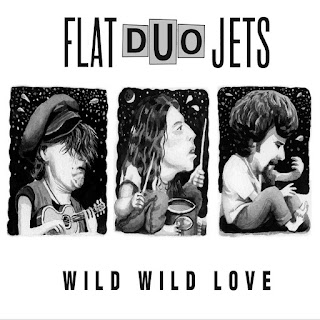 Flat Duo Jets – Wild Wild Love (Daniel 13 Records)
Formed by singer/guitarist Dexter Romweber and drummer Chris “Crow” Smith, North Carolina’s Flat Duo Jets have been kickin’ the can since the mid-‘80s. The pair has cranked out psychobilly jams with reckless abandon on almost a dozen albums since the 1990 release of their indie debut, influencing artists like the White Stripes and the Drive-By Truckers. That hard-to-find Flat Duo Jets debut LP is included on Wild Wild Love, a double-disc compilation that also includes the band’s 1985 cassette-only mini-album In Stereo and a slew of studio outtakes. The Jets’ raw-boned sound and the primitive production afforded performances like “My Life, My Love” (with Dex channeling his inner Elvis), the ramshackle “Tribute to Gene” (i.e. Vincent), and the New Orleans-flavored “Strut My Stuff” make for hi-octane fun. The ‘outtakes’ disc has its sonic charms also, especially the rowdy surfabilly instrumental “Bumble Bee Boogie.” Well worth your time to check out... Grade: B   BUY IT! 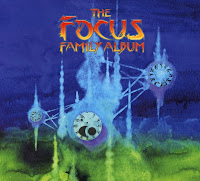 Focus – The Focus Family Album (In and Out of Focus Records)
An odd little bird, this The Focus Family Album collection – two discs with 20 tracks by the Dutch band best-known for its 1971 hit “Hocus Pocus.” Presented in an eight-panel digipak with artwork by Roger Dean, the set features ten tracks by Focus along with two solo tracks by each current band member, including founder Thijs van Leer and longtime drummer Pierre van der Linden, plus two by associated band Swing. Fifteen tracks are previously unreleased – an offering for the band’s cultish fans – but overall the results are mixed. The crooning solo vocals of van Leer are a little disconcerting while van der Linden’s slight voice is nevertheless disarming on his two charming efforts. The band’s signature jazz-flecked progressive-rock sound is expanded and unpredictable on tracks like “Santa Teresa” and “Victoria” but Menno Gootjes’ solo acoustic instrumental “Two-part Intervention” and Focus’s “Mosh Blues” prove him a knowledgeable and innovative guitarist. Grade: B-   BUY IT! 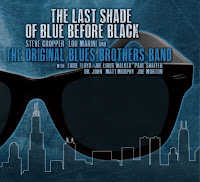 The Original Blues Brothers Band – The Last Shade of Blue Before Black (Severn Records)
John Belushi and Dan Aykroyd’s hit 1980 movie The Blues Brothers was a paean to their love of R&B, the film boosting the careers of idols Aretha Franklin, Ray Charles, and James Brown. The pair was backed by as talented a group of musicians as you’ll ever find, a few of which carry on as The Original Blues Brothers Band. The Last Shade of Blue Before Black is the latest from the Steve Cropper/Lou Marini fronted band, a fine fourteen-song collection of heartfelt soul and blues tunes that features guests like guitarists Joe Louis Walker and Matt “Guitar” Murphy as well as Dr. John and Eddie Floyd, whose “Don’t Forget About James Brown” is the booty-shakin’ prescription for funk we all needed. A raucous cover of “I Got My Mojo Working” is a joyous romp while the title track is a haunting blues ballad that does Jake and Elwood proud. Grade: B+   BUY IT! 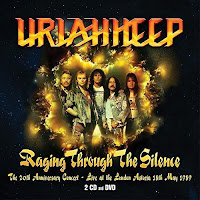 Uriah Heep – Raging Through The Silence (Uriah Heep Records)
Critically-reviled but beloved by fans, Uriah Heep had the last laugh on rockcrit types as they’re still kicking out the jams for rowdy audiences worldwide almost 50 years since their forming. Raging Through The Silence is a super-duper 2-CD/DVD set documenting Heep’s “20th anniversary concert” in London, the 1989 show released on VHS once upon a time and long since forgotten. Touring in support of Raging Silence with fairly-new frontman Bernie Shaw on the microphone, the show offers up fan faves in the form of “Easy Livin’,” “Stealin’,” and “Look At Yourself” as well as lesser-known fare like “Gypsy” and “July Morning.” It’s a solid performance, with beat-keepers Lee Kerslake and Trevor Bolder providing a foundation for Mick Box’s stinging fretwork. Shaw’s vox are a little raw (he’s much better on newer recordings), but he hits all the notes and the show is a true celebration of rock ‘n’ roll. Grade: B   BUY IT! 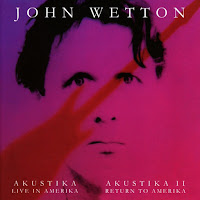 John Wetton – Akustika/Akustika II (Primary Purpose Records)
John Wetton was a true rock ‘n’ roll journeyman, the over-hyped and yet oddly underrated singer, songwriter, and musician enjoying a lengthy solo career along with notable stints in legendary bands King Crimson, Family, Roxy Music, and Uriah Heep. He also recorded excellent albums with Roxy’s Phil Manzanera and Geoff Downes (Yes), but Wetton is best-known as one of the co-founders of 1980s-era rockers Asia. The two-CD Akustika/Akustika II is a gem among Wetton’s solo albums, combining the 1996 live Akustika with a previously-unreleased 2005 performance, displaying Wetton’s immense talents in an intimate acoustic setting with just voice, guitar, and piano. The Akustika disc has some fine moments like “Voice of America,” “The Smile Has Left Your Eyes,” and “Heat of the Moment” but Akustika II includes chilling takes on Crimson’s “Starless” and “Book of Saturday.” With these stark, beautiful performances, Wetton strips prog-rock bluster down to its rawest heartbeat. Grade: A-   BUY IT!