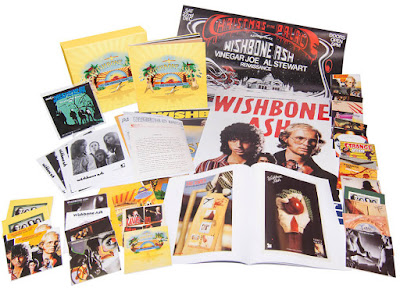 Revered British rockers Wishbone Ash join the ranks of the severely-anthologized with the April 2018 release of the band’s The Vintage Years limited edition box set by Madfish Music. Offering a band history on steroids, the whopping 30-CD collection is limited to 2,500 copies and features all sixteen of the band’s studio albums released from their self-titled 1970 debut through 1991’s Strange Affair, all remastered from the original master tapes for optimal sound quality. Three of these studio discs have long been out-of-print (1987’s Nouveau Calls, 1989’s Here to Hear, and Strange Affair) while many of the band’s other albums frequently pop in and out of availability depending on whatever way the wind blows. Each album will feature bonus material including rare studio outtakes, B-sides, and previously-unreleased tracks.

Wishbone Ash also released three studio albums during the span of decades covered by The Vintage Years – Live Dates (1973), Live Dates 2 (1980), and Live In Tokyo (released exclusively in Japan in 1979) – and all three albums are included here. The box set also includes eight previously-released live albums on eleven CDs, all recorded during the band’s prolific gravy years between 1973 to 1980, including performances from British tours for the albums Wishbone Four (1973), New England (1976), Front Page News (1977), and No Smoke Without Fire (1978), among others.

The Vintage Years box includes a swanky 156-page hardback book written by Classic Rock magazine scribe Dave Ling and featuring personal photos, rare posters and flyers, and collectors’ memorabilia. The set also includes a wealth of goodies for the hardcore Wishbone Ash fan, including a 36-page poster book covering the band’s early years through the Here to Hear LP, four reproduction concert posters from shows in 1973, ’74, ’75, and ’77; a facsimile MCA debut album promo pack; a 7” flexi-disc for the single “Blind Eye,” the first of the band’s 11 Japanese singles series; and individually-signed photos of each band member. 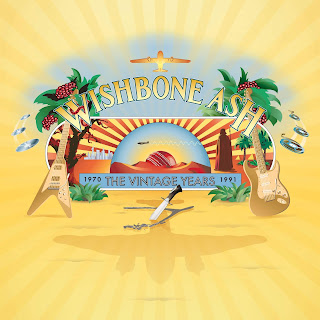 Formed in 1969 by bassist Martin Turner and drummer Steve Upton, the classic early Wishbone Ash line-up came together with the addition of guitarists Andy Powell and Ted Turner (no relation to Martin). The band found its signature sound – a unique and ambitious mix of progressive rock and British folk fueled by their imaginative and influential twin guitar attack – with their sophomore album, 1971’s Pilgrimage. The band continued to explore new ground and outpace their contemporaries with pioneering albums like Argus (1972) and Wishbone Four. Band members have come and gone and come back again through the years, until Powell was the last man standing, both he and former member Martin Turner struggling for control over the band’s legacy during the ensuing decades.

Wishbone Ash continues to make vital, creative music as witnessed by the band’s most recent album, 2014’s Blue Horizon. All four members of the classic band line-up contributed to the construction of The Vintage Years, Martin Turner explaining in a press release for the box set, “I looked after most of these tape recordings for decades, wondering when they would ever see the light of day and I am very glad that they will at last be available for everyone to hear…It’s almost like having one’s whole musical life in one box. It certainly represents the most comprehensive Wishbone collection that I know of and I hope you enjoy it.”

Powell adds, “It’s truly amazing to look back at the musically fertile ‘70s and ‘80s and wonder at the sheer amount of incredible creative output from our band…I feel blessed to have played my part in it all and I’m truly thankful that it’s set the course for my entire life and all the music that’s followed, as the band continues to live on into the 21st century.” The resulting box set is a comprehensive and exhausting history of one of the more innovative and influential bands in rock ‘n’ roll history. Get more information on The Vintage Years from the Madfish Music website.