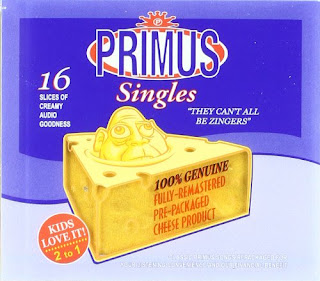 Every marketing slogan – no matter how lame, laughable or lamentable – carries with it a germ of truth. In the case of They Can’t All Be Zingers, ostensibly a “greatest hits” compilation from post-punk, modern-funk avant-grunt trio Primus, the slogan is entirely apt. Without a doubt one of the strangest bands to crawl out of the primordial muck that was ‘90s alternative rock, this “Most Unlikely To Succeed” outfit drew its influences from an eclectic succotash of American musical outsiders, from Frank Zappa and Funkadelic to Devo and the Residents. The Primus hybrid of odd-rock, heavy metal, improv-jazz and Motown funk made for heady listening; surprisingly enough, considering its pedigree and pretensions, it also sold reasonably well, scoring the band a handful of Gold™ and Platinum™ Album certifications.

It all started with bassist Les Claypool, a virtuoso musician with a deft hand and a truly warped sense of humor. In another lifetime, Claypool might have been the next Jaco Pastorious, exploring the outer limits of jazz conventions. Claypool took another direction, however, brewing up his musical madness in the shadows of the Bay Area punk and metal scenes. With the addition of guitarist Larry LaLonde – an axeman whose talents were often overshadowed by Claypool’s personality and abilities – and drummer Tim Alexander, Primus assaulted the grunge generation with a succession of strange and somewhat confusing recordings, beginning with the band’s 1991 major label debut, Sailing The Seas Of Cheese.

Primus' They Can't All Be Zingers


Primus followed with Pork Soda in 1993 and Tales From The Punchbowl in 1995, the band’s first three albums yielding unique songs like “Tommy The Cat” and “My Name Is Mud” that found their faithful among the “anything goes” Lollapalooza crowd, if little in the way of traditional radio airplay. Claypool later booted Alexander from the band, replacing him with Brian Mantia in time for 1997’s The Brown Album. By the end of the decade and 1999’s Antipop, the gig had pretty well played itself out. By this time, Claypool had sunk into the mire of jam-band instrumentals, preferring virtuosity over even a semblance of melody or song-structure, which was never Primus’ strong suite anyway.

In many ways, Primus was a modern prog-rock band. As illustrated by songs like “Too Many Puppies” or “Mr. Krinkle,” Primus dove deep into the abyss of the genre-whose-name-we-dare-not-speak, surrounding Claypool’s nonsensical, often surrealistic lyrics and goofy, off-kilter vocals with an instrumental soundtrack straight from the musical playbook of prog’s extreme avant-experimental wing. Claypool’s talents were such that he could attack his instrument in a way that bass had never been played, slapping, tickling and manipulating riffs like a metal guitarist while retaining a funky rhythmic undercurrent that owes as much to Tony Levin and John Wetton as it does to Bootsy Collins or Marcus Miller.

In the same vein, Claypool’s longtime foil LeLonde hits the frets with a fervor that is equal parts Robert Fripp and Alex Lifeson. LeLonde’s wiry leads are dissonant and atonal, exploring the limits of the instrument in much the same way as Fripp. However, LeLonde would also incorporate classical and classic rock influences into his work, the dichotomy between the familiar and the exploratory supporting Claypool’s outer space instrumentals and heavy tone-riffing with both subtle and not-so-subtle flourishes. The drummers of Primus’ history – Alexander and Mantia – aren’t chopped liver, by any means, both doing an admirable job of keeping the beat behind a madman known to switch gears in a heartbeat. In the end, however, the drummers in Primus were incidental: the band’s sound is defined by the stormy interplay of Claypool’s dominant bass and LeLonde’s surgical six-string work.


They Can’t All Be Zingers explores the complete history of the band, including three tunes from their pre-Interscope 1990 debut, Frizzle Fry, three songs each from the essential first three major label discs, and a smattering from the band’s later efforts. The album also includes a previously unreleased extended mix of “Shake Hands With Beef” from The Brown Album and “Mary The Ice Cube,” rarities thrown in as a sop to get fans to pony up for the compilation. For those unfamiliar with the radical noise made by Primus, They Can’t All Be Zingers is the only logical introduction; after you get a taste of this stanky cheese, you might be hungry for more... (Interscope Records, released October 17, 2006)

Buy the CD from Amazon.com: Primus' They Can't All Be Zingers

Review originally published by Alt.Culture.Guide™ music zine, 2006
Posted by Rev. Keith A. Gordon at Friday, May 11, 2018