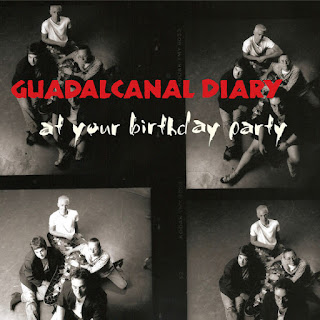 The favorite sons (and daughter) of Marietta, Georgia the alt-rock band Guadalcanal Diary released four critically-acclaimed albums and achieved modest MTV airplay during their time in the sun circa 1981-1989. Favorites of the college FM radio crowd (including yours truly), Guadalcanal Diary was frequently overshadowed by R.E.M. and the nearby “Athens scene” that included bands like the B-52s, Pylon, and Love Tractor, among others. The band broke up when frontman Murray Attaway launched his solo career, which yielded a single, albeit significant album in 1993’s In Thrall.

Guadalcanal Diary got back together a few times throughout the 1990s to perform regional live shows. During a couple of nights in January 1998 the line-up of singer/guitarist Attaway, guitarist Jeff Walls, bassist Rhett Crowe, and drummer Joe Poe convened at the popular Smith’s Olde Bar in Atlanta for a two-night stand that was recorded and subsequently released independently by the band in ’99 as At Your Birthday Party as a “thank you” to their loyal fans.

On July 13th, 2018 Omnivore Recordings will reissue At Your Birthday Party, providing the long out-of-print cult recording its first shot at worldwide distribution. The sixteen-song performance includes songs from all four of the band’s albums for Elektra Records, as well as an exclusive song found nowhere else. The CD also features updated artwork and new liner notes by Attaway.

In the liner notes to At Your Birthday Party, Attaway writes, “after doing one solo album in L.A., I wanted to go back to the South and record with musicians who were pals and who had the same record collection that I had...A lot of tracks that I love came from those sessions, but others seemed like Guadalcanal songs. Guadal needed to do them. So Rhett Crowe, John Poe, and Jeff Walls all agreed to play on the tracks. That record remains unreleased, unfortunately. But during the sessions, the four of us had big fun and we decided to do some live shows. Again, a good time was had by all. Then we got anxious to do a live album, as we never quite got our sound on record accurately, because you never do. So we did that. ”

Hopefully this sought-after collectors’ item will be the first shot in a restoration of the Guadalcanal Diary catalog by Omnivore (similar to the label’s work on the Big Star and Game Theory catalogs). Albums like Walking In the Shadow of the Big Man (1984, with the great song “Watusi Rodeo”), 1986’s Jamboree, 1987’s classic 2x4, and 1989’s band swansong Flip-Flop have darted in-and-out of print sporadically through the years, robbing the band of the opportunity for rediscovery by a younger generation of fans for whom the band’s guitar-oriented, melodic jangly-rock sound could be catnip.