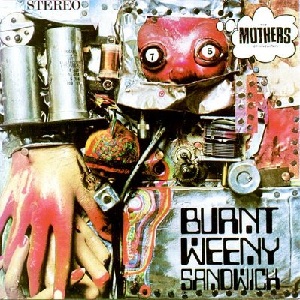 Released in February 1970, the Mothers of Invention’s Burnt Weeny Sandwich was the band’s sixth album (and eighth overall “official” Zappa release when you include two previous ‘solo’ LPs). An often overlooked entry in the Maestro’s canon, it’s both a transitional work as well as a signpost for creative directions that Zappa would take in the future. One of two albums released by Zappa that year (the other being the audacious Weasels Ripped My Flesh), it came in the wake of the break-up of the original Mothers as Zappa struggled artistically, professionally, and financially to bring his ever-shifting musical vision to his small but loyal group of fans. Under supervision by the Zappa Family Trust, Universal Music has reissued Burnt Weeny Sandwich on vinyl, correcting the sonic errors that marred earlier CD reissues (which likely had perfectionist Frank spinning in his crypt).

This vinyl reissue of Burnt Weeny Sandwich is pressed on shiny, thick 180-gram audiophile black vinyl and includes a stocky gatefold sleeve with the original album artwork. The reissue was mastered from the original ¼” stereo safety master tapes by Bernie Grundman, a veteran engineer who put the final stamp of approval on albums by folks like Prince, Steely Dan, Michael Jackson, and Kendrick Lamar, among many others. Unavailable on vinyl for over 30 years, last included as part of Zappa’s Old Masters Box Two box set, the reissue also includes a reproduction of the original album’s cool eight-panel, double-sided fold-out B&W poster featuring photos of the various band members. Cal Schenkel’s original oddball front cover is a stunning and prescient bit of post-industrial collage art while the cryptic back cover art offers an enigmatic cartoon thought bubble.


Burnt Weeny Sandwich is the first Mothers’ album to combine studio and live recordings, a technique that Zappa would pursue throughout the remainder of his career. In many ways, it displays Zappa’s creative genius in reset mode, the bandleader running out of steam after releasing seven studio albums (including two double-discs) in roughly five years, a heady workload to be sure. The album holds up well in spite of its Frankenstein-styled construction, due not only to Zappa’s talents but also that of musical collaborators like violinist Sugarcane Harris, pianist Ian Underwood, and guitarist Lowell George (who left the Mothers by “mutual agreement” and formed Little Feat in 1969). The record also features the not-inconsiderable skills of Mothers OGs like Roy Estrada, Jimmy Carl Black, Don Preston, and the horn section of Bunk and Buzz Gardner.

Burnt Weeny Sandwich gets the party started with Zappa reaching back into his past with a cover of the Five Deuces’ doo-wop classic “WPLJ” complete with gorgeous backing harmonies and an arrangement that relies more on vocal delivery than on its sparse instrumentation. Not a year removed from the creative exercise that was Cruising with Ruben & the Jets, Zappa would revisit his beloved doo-wop and 1950s-era rock ‘n’ roll more than once in the years to come. “Igor’s Boogie, Phase One” and the following “Phase Two” are brief tone poems named in tribute to favored composer Igor Stravinsky; the former leads into the tinkling instrumental “Overture to A Holiday In Berlin” and the latter into the lengthier “Holiday In Berlin, Full Blown,” which extends musical themes that the Mothers had previously explored on the Absolutely Free and We’re Only In It For the Money albums. The improvised hornplay by the brothers Gardner here is as wild and innovative as anybody in the late ‘60s while Zappa’s imaginative fretwork is miles beyond that of his peers in the world of rock ‘n’ roll, save for Jimi Hendrix, who played in a universe entirely his own.

Little House I Used To Live In


In between this handful of tracks falls “Theme From Burnt Weeny Sandwich,” a guitar-driven four-and-a-half-minute instrumental jam that anchors the album’s first side and showcases Zappa’s six-string skills, his guitar solo repurposed from an unused earlier recording originally put on tape for an extended version of “Lonely Little Girl” from We’re Only In It For The Money. The first side closes with the cleverly-titled “Aybe Sea,” a vigorous piano solo by Ian Underwood that seems absolutely Elizabethan in its construction, his instrument sounding more like a harpsichord than a standard piano. It wouldn’t be the last time that Zappa would mix classical elements with jazz-fusion experimentation, and in the hands of the immensely-talented Underwood, the performance offers a fine conclusion to the first side.

The second side of Burnt Weeny Sandwich is comprised of but two songs, but Zappa’s original, eighteen-minute live performance of “House I Used To Live In” is a masterpiece of modern classical composition that itself would presage the Maestro’s various musical obsessions in years to come. Starting out small with Underwood’s discordant piano notes serving as the song’s intro, the performance reminds of Zappa’s fascination with avant-garde composers like John Cage, launching into a rich brew of syncopated rhythms, machinegun time changes, and overall chaotic instrumentation. The song careens off the boards like a pinball machine set to ‘tilt’ with whiplash musical directions and unexpected curves like Sugarcane Harris’s clattering but exhilarating violin solo (also previously-recorded but fitting here perfectly) and Underwood’s staccato piano-pounding. Burnt Weeny Sandwich closes out in the same manner as it opened, with a cover of Jackie and the Starlites’ doo-wop tune “Valarie,” an inspired reading supported by shimmering instrumentation and heartfelt vocals.


Surprisingly enough, Burnt Weeny Sandwich would become the Mothers’ highest-charting album to date in the U.K. while barely scraping into the Top 100 on the U.S. charts. The album’s piecemeal construction, mostly instrumental compositions, and its ongoing experimentation with musical themes began a year previous with the Uncle Meat double-album played true to Zappa’s intent to shake fans from their complacency and make them think. Along with the subsequent Weasels Ripped My Flesh, the two albums serve as a final conclusion to the original era of the Mothers of Invention. From this point on, the band’s sole focus would be on Zappa as it slowly evolved into a creative vehicle exclusively for Zappa’s solo efforts.

Zappa would later put together a new version of the Mothers centered on the vocal talents of former Turtles members Mark Volman and Howard Kaylan (a/k/a “Flo & Eddie”) and including talented musicians like veteran British drummer Aynsley Dunbar (John Mayall’s Bluesbreakers) and bassist Jim Pons (The Turtles) as well as longtime Mothers Ian Underwood and Don Preston. Subsequent recordings would feature Zappa as a smutty comedic storyteller (Just Another Band From L.A.) and jazz-fusion pioneer (The Grand Wazoo) before hitting his commercial peak with the pop-influenced rock LPs Over-Nite Sensation and Apostrophe. Taken in this context, Burnt Weeny Sandwich and Weasels Ripped My Flesh served as an artistic catharsis necessary for Zappa to move on from his original vision for the Mothers and into the wide-open future. Grade: B- (Zappa Records/UMe, released June 22, 2018)

Buy the vinyl from Amazon.com: The Mothers of Invention’s Burnt Weeny Sandwich
Posted by Rev. Keith A. Gordon at Sunday, June 17, 2018