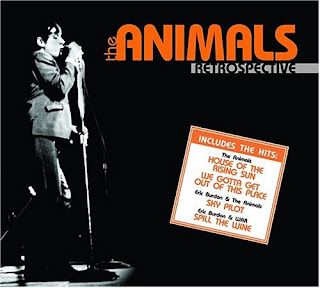 When rock historians chatter over the legacy of the mid-60s “British Invasion,” Eric Burdon and the Animals typically end up short-changed. A working class version of the Rolling Stones, Burdon and his crew were no mere Jagger/Richards/Jones doppelgangers. The Stones might have been a great cover band, but the Animals did more to popularize folk, blues, and R&B with the band’s unique sound and ability to make hits out of the most unlikely cover tunes. From the Animals’ chart-topping 1964 hit “House of the Rising Sun” through the band’s 1968 swansong “White Houses,” Burdon and various line-ups of the Animals enjoyed a string of hit singles that rivals even the Beatles.


Unfortunately, a definitive Animals collection has eluded fans for over three decades. Always short on cash, Burdon has been known to take a quick payday now and then, re-recording his “greatest hits” for a variety of fly-by-night producers and hack house bands. If you were duped into buying one of these garbage compilations, toss it out in the yard right now. Your salvation has come in the unlikely guise of Allen Klein and his ABKCO Records label. Much like he did a year or so ago with the 1960s-era Stones catalog, all of the Animals’ classic material is now available on a single twenty-two track disc, remastered for the digital age.

Retrospective is a wonderful document of the Animals’ career, offering every single song of consequence from the band’s brief creative era. Sure, the hardcore fanboy might want some studio outtakes or alternative versions, but for the typical music lover, Retrospective fits the bill perfectly. From the deep opening notes of “House of the Rising Sun” to the easily recognized classic bass line of “We Gotta Get Out of This Place,” England’s overlooked hit-makers are well represented here. From the band’s best-known mid-60s songs, like those mentioned above and “Don’t Let Me Be Misunderstood” and “It’s My Life,” to Burdon’s psychedelic daze, it’s all here.

Retrospective also offers up a fair share of lesser-known singles as well, cool blues/soul covers like John Lee Hooker’s “Boom Boom” or Sam Cooke’s “Bring It On Home To Me” or weird stuff like Donovan’s “Hey Gyp.” The Animals did a powerful, haunting version of the American prison song “Inside Looking Out” years before Grand Funk Railroad, and the psychedelic-era songs like “Monterey” and “Sky Pilot” still sound great after all these years. The album closes with the radio version of the 1970 hit single “Spill the Wine,” Burdon backed by the (then) unknown funk band War.


Much like the recent Rollings Stones and similar Dylan reissue CDs, Retrospective is a hybrid disc, meaning that it has both CD and Super Audio CD layers. You can play it on both a regular CD player (including car or computer), but when you pop it into a SACD player, the intricacies of the remastering come into play. Burdon’s vocals sound more vibrant, Alan Price’s organ rings like a church organ, and Hilton Valentine’s riffing fretwork offers prove that more than one band influenced the birth of blues-based heavy metal. If you’re unfamiliar with the Animals, or simply want to rediscover a great vintage rock ‘n’ roll band, run out and grab your copy of Retrospective. (ABKCO Records, July 20, 2004)

Buy the CD from Amazon.com: The Animals’ Retrospective