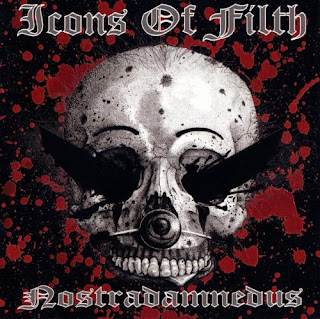 The first wave of British punk, circa 1977, spawned a number of bands that possessed a social consciousness and expressed their concerns through song. The Clash, the Sex Pistols, the Damned, even modish new wavers like the Jam all stirred up their fair share of controversy with lyrics commenting on social ills or championing left-leaning causes.

Nothing could prepare the Queen’s subjects for what was to follow, however. Extremist punks like Crass, Conflict, Discharge, Flux of Pink Indians, the Subhumans, and Icons of Filth took their cue from American hardcore bands, mixing anarchist philosophy with powerful thrash-and-burn instrumentation to create some of the most invigorating punk rock ever heard.

Whereas some of these bands – Crass readily comes to mind – were naïve idealists, forming communes and spinning off side bands, others such as Conflict or Discharge were more nihilistic in nature. With Maggie Thatcher in office in the U.K. and Ronnie Ray-gun sleeping in the White House, anarchist punks were forced to form their own record labels to get their music out since no corporate label wanted to touch them.

Conflict formed Mortarhate and, aside from the band’s own albums, they also released a number of singles and an album by fellow travelers Icons of Filth (all of which were reissued on CD by Go Kart in 2000). Throughout the years, Icons of Filth has grown in statue rather than sinking into obscurity, becoming one of a handful of artistic touchstones for underground punks wanting to bring politics into their music. With the recent revival of bands like Discharge and old mates Conflict, it was only natural for Icons of Filth to reform and stroll into the recording studio.


Nostradamnedus is the result of the band’s efforts, the first album from Icons of Filth in nearly twenty years and, let me tell you kiddies, this shit’ll grab you by the ears and knock your head into the wall. The band members seemingly haven’t lost a step through the years, still quite capable of creating balls-to-the-wall sounds that’ll shred yer greedy lil’ eardrums and make yer nose bleed. The usual lyrical preoccupations are found on Nostradamnedus: anarcho-leftist rhetoric about animal rights, vegetarianism, and racism and so forth, but Stig, Daffy and the boys have updated their perspective to appeal to a new millennium zeitgeist. While songs like “Riddled With Guilt” or “Treadmill” hit your brain like sticking a fork in an electric socket, others, like “Henry Ford,” tickle yer cerebellum with not-so-subtle thoughts of Luddite sabotage.

Once you get past the bad joke hidden in the album’s title, Nostradamnedus stands as an instant classic of hardcore punk, if only for the title track and “Airwaves.” Pointing directly at the fools who take every world event and match it to one of Nostradamus’ many prophecies, the band cleverly wraps up the past and future in a package with a neat little bow. After all, if the future has already been foretold, why bother to try and change it? Nostradamnedus, indeed! As for “Airwaves,” it was probably written by Icons of Filth a couple of years ago but, as we stand on the brink of war in early 2003, it couldn’t be any more relevant.

Set to a migraine level six-string drone and explosive rhythms, Stig sings “if you form an opinion that’s not in dominion/then you’re an oddball and should be kept quiet.” Kind of like how Rush Limbaugh and Sean Hannity and these other rightwing radio gasbags keep beating the fucking war drums, ridiculing anybody who’s not ready to prostrate themselves before the wisdom of massa Bush and his Konservative Klan. “Airwaves” doesn't stop there, however, as Icons of Filth verbally slamdunk the entire corporate media monopoly and its restriction on diversity of thought – Stig spits out “when they tell you of free speech, they’re liars.”

Mindless television programs, radio playlist homogenization, empty consumerist dreams, “antenna head and already dead.” Fittingly enough, the band saves its worse barbs for punk rock itself, “rock ‘n’ roll has lost its soul and now everything's diluted/bands with fans, big money plans/your pockets empty, looted.” Kind of like how you feel when you buy that ultra-groovy new CD at the mall and get home to find out that it only has one decent song and when you stop to think about it, that song kind of sucks, too…


Now, more than ever, we need Icons of Filth, one of the few bands with the balls to be bold in a meek musical landscape. The Rev sez “check it out!” (Go Kart Records, released November 26, 2002)