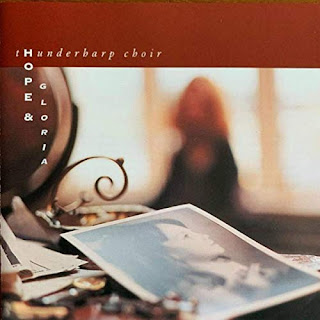 A few years back, the Detroit scene gave birth to a rock ‘n’ roll band by the name of Jugglers & Thieves, a promising outfit with a pair of skilled guitarists, a talented female bass player (a rarity in those days), and a female vocalist with the voice of an angel.

The band mixed flash and form with acoustic balladry and electrifying hard rock, standing head and shoulders above their Motor City musical brethren, who all seemed to want to be either Guns ’N Roses or the Sex Pistols. Jugglers & Thieves released one wonderful album, played a single memorable Nashville show at a now-defunct local club, and then faded into rock ‘n’ roll history.


That angelic voice, personified in the form of one Christine McCall-Kuehn, has returned with another Detroit-area band, Thunderharp Choir. Their independently-released Hope & Gloria has nothing in common with the ex-Miss McCall’s previous band save for her subtly matured vocals and an impressive range of musical styles. The disc opens with “Magical Days,” a folk-pop tune which highlights Chrissie’s singing and songwriting skills, delighting with its lyrical hooks and its infectious, melodic “doo-doo-doo” chorus. It’s the perfect entry to Hope & Gloria, a collection of songs guaranteed to grow on you with each subsequent playing.

McCall-Kuehn trades off leads with the equally talented Graham Strachan, whose gutsy, more earthy style contrasts well with Chrissie’s heavenly vocals. Guitarist Jason McCall-Kuehn is certainly no slouch in the six-string department, tearing off some tasty licks in a blues-rock vein while keeping up a strong instrumental presence; the rhythm section adds a strong backbone to the material. Cuts like Graham’s “Strawberries,” with its nonsensical nursery-rhyme ending; Chrissie’s lonely, tearful “Where Your Heart Was,” with its appropriately sparse instrumentation, or Jason’s mournful ode to love lost, “Red Dress,” showcase a great depth of songwriting talent among the members of Thunderharp Choir. Even the hauntingly beautiful and chaotic “Soon,” cowritten by Chrissie and ex-J & T bass player Jill Zimba-Dybka, is served well by the band’s underlying chemistry, their musical skills perfectly tying together the material found on Hope & Gloria.


Thunderharp Choir, much like their musical antecedent Jugglers & Thieves, is a rarity in today’s musical world: a completely unique and original band that refuse to fit into any neat category or pigeonhole. They masterfully blend the finer elements of folk and blues, melding them seamlessly with a rock background. Hope & Gloria is intelligent, thoughtful, sincere and most of all, entertaining. This time around, let’s hope that Chrissie and her latest band receive the acclaim and success they so thoroughly deserve. (Black Thistle Records, 1996)