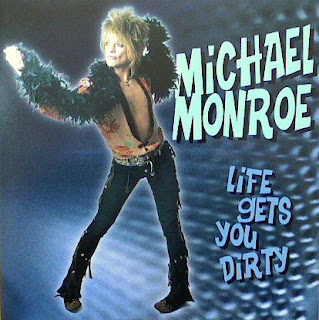 Michael Monroe was an integral part of Hanoi Rocks – one of rock ‘n’ roll’s most tragically overlooked bands. Over the course of half a dozen albums, Hanoi Rocks set the stage for most of what would follow in ’80s hard rock.

Guns ‘N Roses would subsequently rip off a good deal of Hanoi Rocks’ unique hybrid of flamboyant glam-rock and metal-edged hard rock, with Axl repaying the favor by getting the Hanoi Rocks’ catalog reissued stateside by Geffen. After the death of the Hanoi’s drummer, the band broke-up. Monroe made a couple of solo albums afterwards, later returning to Europe and fading from stateside awareness.

Michael Monroe’s Life Gets You Dirty


As an original Hanoi Rocks fan, I was overjoyed to find Life Gets You Dirty stuffed in my mailbox one afternoon and after a couple of months of listening to Monroe’s long-overdue solo effort, I am not disappointed. Life Gets You Dirty plumbs much of the same hard rock territory as Monroe’s previous solo material, and even his work with Hanoi Rocks, but that’s not necessarily a bad thing. Monroe’s vocals are particularly suited to this type of performances, complimented by additional vocals from songwriting partner Jude Wilder.

Monroe’s blistering guitar work evokes memories of former bandmate Andy McCoy while his current rhythm section nails every song. Cuts such as “Just Because You’re Paranoid,” “If The World Don’t Want Me” and  “What’s With The World?” as well as the obligatory Hanoi cover, “Self Destruction Blues” rock with a fervor and electricity that is truly timeless.

Since Life Gets You Dirty is an import disc, it may be difficult to find on your local music store’s thinly-stocked shelves. If you like your rock hard, though, you might want to check out Michael Monroe. With a high-voltage blend of amplified roots-rock, heavy metal, punk attitude and glam theatrics, Life Gets You Dirty blows away every hard rock poseur on the charts today. (Steamhammer Records, 1999)