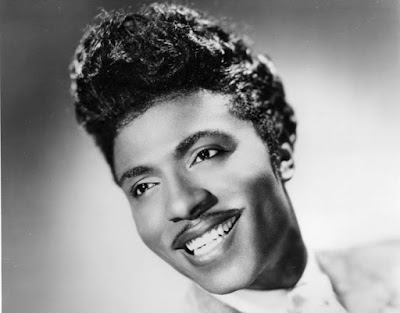 In 1970, rock ‘n’ roll legend “Little” Richard Penniman was more than a decade removed from his late ‘50s commercial peak. Recording for Art Rupe’s Specialty Records label with producer Robert “Bumps” Blackwell, the two men racked up an impressive string of hit singles between 1955 and 1958, songs like “Tutti Frutti,” “Long Tall Sally,” “Lucille,” and “Rip It Up” that would influence a generation of artists to follow, from R&B giants like Otis Redding and James Brown to rockers like Elvis Presley, Buddy Holly, and the Beatles, among many others.

Although he hadn’t released an album of new material in three years (and hadn’t enjoyed anything resembling a hit single since 1958), Reprise Records signed Richard on the strength of his success at the time as a dynamic live performer. The singer would four albums for Reprise, including 1970’s Little Richard-produced The Rill Thing, which scored a minor chart hit with the socially-conscious single “Freedom Blues.” The following year’s The King of Rock and Roll, produced by Richard’s old friend H.B. Barnum, was met with critical disdain even while it inched into the upper-reaches of the Billboard album chart.

Undeterred, Richard returned to the studio in 1972 and recorded two more albums for Reprise – Southern Child, an uncharacteristic collection of Southern rock and country music, and The Second Coming, a more straightforward set of old-school rock and R&B. Both albums were produced by Richard’s former partner-in-crime, “Bumps” Blackwell, and featured a hybrid band combining R&B vets like saxophonist Lee Allen and drummer Earl Palmer playing alongside young turks like slide guitarist Michael Deasy and steel-guitar wizard “Sneaky” Pete Kleinow. Southern Child would be shelved by the label for over 30 years before finally seeing release in 2005 as part of a Rhino Records box set. Reprise instead chose to roll the dice with The Second Coming, which was immediately savaged by critics who were disappointed in the songs and complained of the album’s overproduction. 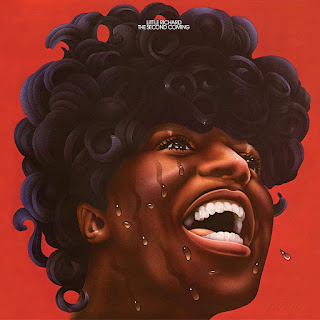 Critical barbs aside, when viewed from the far-off distance of today, Little Richard’s The Second Coming (Grade: B) is nowhere near as bad as claimed at the time. Does the album hold another “Tutti Frutti” or “Lucille”? You know it does not, but the album does kick off with the raucous, no-frills rocker “Mockingbird Sally,” an unbridled romp that features one of Richard’s most over-the-top vocal performances, shards of 1950s-styled twangy guitar, dueling saxophones, and Richard’s most manic piano-pounding. “Second Line” is equally audacious, if not as effective, with Richard’s strutting vocals dominating above a funky, New Orleans-inspired groove that, while entertaining, eventually goes nowhere in particular but does allow the singer to reference a number of colorful characters in the meandering lyrics.

Richard switches gears with “It Ain’t What You Do, It’s the Way How You Do It,” an up-tempo number with a fervent soul undercurrent. The instrumentation is a bit busy, like Blackwell knocked all the players in a blender and hit ‘puree’…but it’s a fun tune nonetheless, with a sort of Southern rock vibe that can’t quite keep up with Richard’s energetic vocals. I can see the infectious semi-instrumental “Nuki Suki” becoming an FM radio hit back in 1972, the song displaying a funky, horn-driven rhythm and electrical instrumental dexterity easily the equal of what was being pumped out by Stax Records at the time.

“Rockin’ Rockin’ Boogie” is as close to his 1950s-era roots as Richard gets on The Second Coming, his vocals exploding above a tsunami of sea-horn saxophones and amphetamine ivories. By contrast, “Prophet of Peace” is a stab at appealing to the contemporary zeitgeist, Richard’s lyrical sermon delivered atop a manic soundtrack of clashing instrumentation that creates a bedrock groove beneath the singer. The lengthy, seven-minute R&B instrumental raver “Sanctified, Satisfied Toe-Tapper” closes out the album, wasting Little Richard’s immense talents as vocalist, but the song delivers such a liver-quivering good time that it’s hard to disregard.

Bonus tracks on this Omnivore Recordings reissue of The Second Coming include the Quincy Jones written-and-produced tunes “Money Is” and “Do It-To It” from the 1972 film $. The former is a red-hot slab of early ‘70s urban funk with a strong-as-steel Chuck Rainey bass riff, ‘chunka-chunka’ guitar licks, and Richard’s bold vocals while the latter is a similar contemporary construct with an even hotter bass line, more upbeat arrangement, great vocals, and some Latin-styled background percussion. Sadly, The Second Coming failed to chart and would represent the final album of the rock legend’s early ‘70s trilogy.

Little Richard left Reprise feeling that they’d under-promoted and under-valued his work for the label, and I can’t disagree since they shelved an entire album and seemingly ignored the rest. Two of his three LPs for the label (The Rill Thing and The Second Coming) are inarguably above-average efforts, and even The King of Rock and Roll, has some stellar moments alongside the chaff. Richard would record one more rock ‘n’ roll album during the decade – 1973’s low-budget Right Now! – with Blackwell at the helm but, by the end of the ‘70s, Richard’s substance abuse problems had spiraled out of control and he returned to the ministry to find some inner peace. 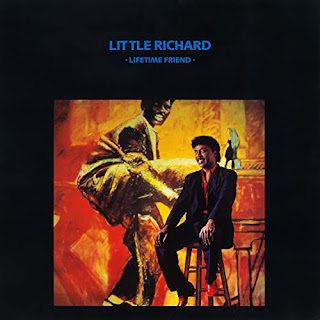 Richard recorded a poorly-received Gospel album, 1979’s God’s Beautiful City, in Nashville for the Christian-oriented Word Records label to close out the decade. He recorded some backing tracks for his TV appearances during the early ‘80s, and released his autobiography, The Quasar of Rock and Roll, in 1984 to some acclaim. Little Richard returned to the studio in 1986 to record Lifetime Friend, his first album in seven years and a curious balancing act between Richard’s religious leanings and his secular past in rock ‘n’ roll.

Richard recruited with his old friend and touring band member Travis Wammack, who had played on The Rill Thing, to help make the new album. The rest of Richard’s studio band included bassist Jesse Boyce, drummer James Stroud, and keyboardist Billy Preston, working with producer Stuart Coleman in London. Lifetime Friend (Grade: C) kicks off much like The Second Coming did 14 years previous, with the rip-roaring “Great Gosh A’Mighty.” Written by Richard and Preston, the song’s R&B foundation is embroidered with blasts of sax, honky-tonk piano tinkling, and scraps of fluid guitar with backing singers providing a Gospel tint to the recording. The song was Richard’s first hit in years, peaking at #42 on the Billboard Hot 100 chart when released as a single after appearing on the soundtrack to the movie Down and Out In Beverly Hills.

Oddly, much of Lifetime Friend actually sounds like it could be from a 1980s-era Eddie Murphy movie soundtrack. “Operator” is a swaggering, high-rent, R&B tinged rocker with a funky groove, groovy harmony vocals, and a vamping soundtrack while “Somebody’s Coming” is a slight, pastoral performance that could easily play behind a film’s pensive moment. The title track is encouraging, but under-produced almost to the point where Richard disappears. Much better is the raunchy slice of Southern rock that is the Wammack co-write “Destruction,” which provides a brassy instrumental backdrop for Richard’s growling vocals.

Another Wammack co-write, “One Ray of Sunshine,” provides a fine showcase for Richard’s more nuanced vocals. It’s not quite a Gospel song, but Richard approaches it as such, providing the pop-soul tune with subtle, reverent vocals that float, gossamer-like, above a tentative drum-beaten rhythm and mournful saxophone cries. “Someone Cares” is another Gospel-tinted pop-rock construct that, provided a more dynamic radio-friendly production, may have appealed to mid-80s ears just the right way to have a hit. Richard’s passionate vocals are accompanied by a shuffling rhythm and a backing chorus but are mixed too low to truly be effective. Ditto for the otherwise enchanting “Big House Reunion,” a mid-tempo rocker with a firm rhythmic backdrop, swinging horns, and restrained Little Richard vocals.

Coleman’s production of Lifetime Friend is plagued with the clichés and idioms too-frequently found in 1980s-era recordings. Stroud’s drums sound tinny and are underserved in the mix, Wammack’s typical razor-sharp guitar is robbed of its bite, and even Richard’s usual crazed piano-playing is underrepresented in favor of his vocals, which are too-often overshadowed by the instrumentation. Although Coleman was an old hand at producing “legacy” artists, working with folks like Cliff Richard, Billy Fury, and Phil Everly, there’s too much production sheen shrouding these performances in mediocrity, and not enough electricity. Part of the problem may have been Coleman’s preference for recording the instruments individually to a click track, preventing any spontaneity in the studio. There are some good songs on Lifetime Friend, but even Richard’s vocals often seem subdued by poor arrangements and worse production choices.

The Omnnivore Recordings reissue of Lifetime Friend includes two bonus tracks, including the single edit of “Operator,” which charted in the U.K. and condenses the song’s energy into a more percussive blast of musical amperage. An “extended mix” of the song, however, just highlights the flaws in Coleman’s production technique. Aside from the album’s one modest U.S. hit single, Lifetime Friend under-performed in an ‘80s music market tailor-made for comebacks (i.e. see Roy Orbison, Tina Turner, the Everly Brothers, et al) by old-school rocker and R&B shouters like Little Richard. Both of these CD reissues feature extensive liner notes by music historian Bill Dahl, who puts each album in context to the singer’s enormous legacy. While none of these Reprise albums offer anything as ground-breaking as Little Richard’s late ‘50s singles, they stand up to scrutiny decades after their release.

Little Richard recorded an album of kid’s songs (Shake It All About) for Disney in 1992, and one last album of rock ‘n’ roll – Little Richard Meets Masayoshi Takanaka – the same year, re-recording his old hits with the popular Japanese guitarist. Richard continued to tour the world throughout the ‘90s and early ‘00s, frequently appeared on TV, and recorded with artists like Elton John and Solomon Burke before illness and age sidelined the timeless rock ‘n’ roller. His legacy secure, Richard Penniman was inducted into the Georgia Music Hall of Fame in 1984, the Rock and Roll Hall of Fame in 1986 (as part of its inaugural class), the Songwriters Hall of Fame in 2003, and the Blues Hall of Fame in 2015. (Omnivore Recordings, released October 23rd, 2020)

Also on That Devil Music: Little Richard’s The Rill Thing & The King of Rock and Roll CD reviews