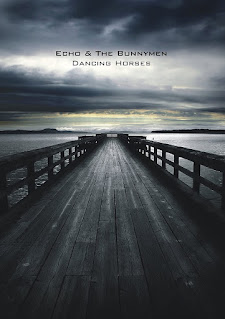 Echo & the Bunnymen are one of the most beloved of the edgy ‘80s “new wave” rock bands hailing from the UK. Releasing their debut LP, Crocodiles in 1980, the band immediately captured an audience with its inspired mix of Goth gloom and doom, psychedelic instrumentation and shoegazer soundscapes. Subsequent albums like Heaven Up Here (1981), Porcupine (1982) and Ocean Rain (1984) set the band above the ranks of MTV-fueled new wave one-hit-wonders and created an influential, lasting musical legacy. Although the band has survived several break-ups and changes in roster over the past 25 years, they reformed in 1997 around the nucleus of vocalist Ian McCulloch and guitarist Will Sergeant and have continued to create their own unique brand of music ever since.

Recorded live during a 2005 performance at The Shepherds Bush Empire in England, Echo & the Bunnymen’s Dancing Horses DVD features 20 songs, including many fan favorites, chosen from across the British band’s lengthy and storied career. The videography on Dancing Horses is decent, with multiple cameras capturing several close and distant angles of the band’s performance. The lightning is moody, atmospheric to a fault, often obscuring the band member’s features, providing only a shadowy, ethereal outline of the performers. It’s all about the songs, of course, and the band sounds as good here as they did some 25 years ago. Guitarist Will Sergeant’s fretwork is phenomenal, consistently excellent and entertaining throughout with incredible tone and liveliness punching up the performances. Ian McCulloch’s vocals are coarse, yet warm, often barely breaking through the wall of sound woven by his bandmates.

McCulloch offers a minimum of between-song patter, the band sliding from one song into another, although he does loosen up and get a little chattier as the show proceeds. There are some fine performances to be found on Dancing Horses. The mid-tempo “Stormy Weather” features one of McCulloch’s most heartfelt deliveries, his vox cradled in a blanket of gently chiming guitars, strong rhythms and mesmerizing instrumentation. “Bring On the Dancing Horses,” from which the DVD takes its name, starts out big with an upward spiral of swirling synths (courtesy of Paul Fleming) as jangling guitars chime in. The instrumentation can barely sustain the middle, McCulloch’s vocals edging through the mix as the music sort of washes over your soul. A heavy bassline, delivered by Stephen Brannan, holds down the foundation while the twin guitars of Sergeant and Gordon Goudie rattle and shake for all they’re worth.

The band mimics the Doors with “Rescue,” McCulloch kicking out his best Jim Morrison as “The Lizard King” impersonation as the music swells and throbs behind him. My personal Bunnymen fave, “The Cutter,” cranks up with Sergeant’s mind-bending psychedelic fretwork at the forefront before launching into McCulloch’s distressed reading of the song’s lyrics. “The Killing Moon” offers a similarly haunting performance, with instrumentation as strong as a spider’s web and as delicate as a moonlit night. “Villiers Terrace” hits hard, drummer Simon Finley’s tribal-styled big beat flaying the skins and propelling McCulloch’s powerful vocals to new highs. The song ends with a torrent of machine-gun beats, stopping with the sudden urgency of a car wreck. “Scissors In The Sand” is another hard-driving number, McCulloch’s vocals straining to rise above the din of clashing guitars and explosive drumbeats. It’s a breathtaking performance, one of many on the DVD. A three-song encore includes a vibrant performance of “Lips Like Sugar” that features electrifying guitar with shimmering leads that provide a distinct signature to the song.

Overall, Dancing Horses captures a very engaging performance from Echo & the Bunnymen, lively and with many highs and lows that will keep you on the edge of your seat. The DVD also includes a bonus interview with Ian McCulloch and Will Sergeant, done as a simple Q&A with the questions flashing onto the screen in print and the guys providing their answers on camera. No concert DVD can replace the intimacy and energy of a live performance, but with Dancing Horses, Echo & the Bunnymen have done a fine job of bringing their live show into our homes, displaying the vibrancy and vitality of a band that, even after all these years, still has something to prove. (Secret Films / MVD Visual, released June 26, 2007)