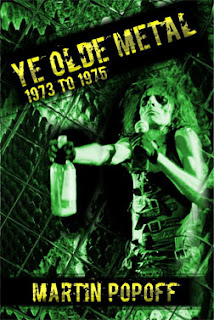 Yeah, yeah, all of you cretins and hopheads that read my previous review of rock critic Martin Popoff’s funtastic book Ye Olde Metal: 1968 To 1972 should know the drill by now. Popoff is heavy metal’s most intelligent voice; he’s reviewed literally thousands of albums, blah, blah, blah. As the editor of, and a contributor to metal bible Brave Words & Bloody Knuckles, Popoff has written about just about every hard rock hero and metalhead to blow across the tumbleweed wasteland over the past two decades or so.

Popoff has also penned scores of books – closing in on two dozen by my count – including the authoritative biographical tomes on pud-stompers like Judas Priest, Black Sabbath, and Ronnie James Dio, among many others. It’s his latest project, however, that might well be Martin’s most ambitious yet, even more “pie-in-the-sky” loony-tune than The Collectors’ Guide To Heavy Metal three-volume series that exhaustively reviews 30+ years of album releases and makes for great reading on the toilet. These books are essential for any collector obsessed with guitar-driven rock, obscure metal bands and rare heavy artifacts of a recorded nature.

Popoff’s latest series is titled Ye Olde Metal, and each book is available only from the author as a private stock, limited-edition of 1,000 signed and numbered copies. Each volume in the proposed multi-book series will cover a specific time period and, through interviews with the people that created them, will tell the story of a number of classic metal albums. The second book is now available, and the Reverend shouldn’t have to hit each of you over the head with his trusty claw-hammer to convince you that Ye Olde Metal: 1973 To 1975 is a mandatory addition to your concrete-block-and-scrapwood bookshelves, wedged right in between Madonna’s Sex and my own Rock Talk.

For Ye Olde Metal: 1973 To 1975, Popoff has put together a stellar line-up of talent, even more impressive than the 1971 Pittsburgh Pirates for sheer batting average and off-the-plate power. Some of the folks in this 230-page paperback collection are undeservingly obscure, bands like the Dictators, the New York Dolls, and Buffalo largely discussed only in the pages of serious rock-rags like Creem, Circus, or Beetle back in the day and never really moving all that many PVC party favors in their time.

Several of the British bands included in the book – classic rock combustibles like Status Quo, Budgie, and Nazareth – were goodly stars in their homeland circa ’73, etc, while other “rock arteests” offered here, notably Alice Cooper, Uriah Heep, and Deep Purple, were either at the top of their craft, or only slightly past their commercial peak at this particular point in time. Ye Olde Metal: 1973 To 1975 also includes crucial platters from personal faves like Bachman-Turner Overdrive, Montrose, Robin Trower, Foghat, and ZZ Top – eighteen albums from fourteen bands, total, discussed in length with interesting factual tidbits and insightful anecdotes.

Interviews with Deep Purple’s David Coverdale and Glenn Hughes cover a lot of ground on two of the legendary band’s most misunderstood albums, Burn and Come Taste the Band, the conversations revealing some of the tensions that broke the early ’70s Mark II version of Purple apart in the first place. Randy Bachman’s thoughts on the two BTO albums included here (II and Not Fragile) are every bit as down-to-earth and self-effacing as one might have expected from the blue-collar rocker, while Syl Sylvain’s take on the New York Dolls scorching self-titled debut album is priceless. The song-by-song recap provided every album and interview in the book illuminate each artist’s thoughts and the creative processes behind every recording.

There are only two bands carried over from the first book – Uriah Heep and Buffalo – but in the first case, any conversation with Heep’s Ken Hensley and Mick Box is always a lot of fun to read (and after spending a drunken evening with the band backstage at a Rush show in Nashville, I found that they’re also a lot of fun to talk with); and as for Australia’s underrated Buffalo, they were so obscure and off-the-American-cult-rock-radar that covering two albums from the band is probably still not enough (they rock folks, so check ‘em out!). Others albums covered by Ye Olde Metal: 1973 To 1975, from Status Quo’s Piledriver and Nazareth’s Loud ‘N’ Proud to Montrose’s excellent self-titled debut and the Dictators’ Go Girl Crazy! are simply essential, and Popoff’s interviews with well-spoken musicians like Manny Charlton, Dan McCafferty, Andy Shernoff, Dennis Dunaway, Ronnie Montrose, Sammy Hagar and all the others help put these classic slabs in context. A lot of the stories told here you won’t find anywhere else, and I’m glad that Popoff has carved them in stone for posterity.

Popoff may be a borderline rock fanatic, but he’s also a realist, and he understands that this entire Ye Olde Metal concept will appeal only to a similar fanboy mentality…thus the limited addition nature of each volume. This is damn important music stuff being documented here; the kind of nuts-and-bolts tales-and-trivia that rock historians take to like kittens to catnip (or rockcrits to Wild Turkey). Although Popoff’s normal writing style is interesting, informative and humorous, in these pages he sits back and allows each interviewee the latitude to tell their story as they deem necessary.

If you’re crazy or just plain curious about this hardscrabble era of pre-metal rock music, Ye Olde Metal: 1973 To 1975 will provide more hours of fun-and-intellectual-frolic than almost anything that you’ll find on teevee these days. The rockers interviewed have lived life and lived to talk about it, their music-making and excesses infinitely more interesting to read about than anything members of Fall Out Boy or My Chemical Romance will ever have to say, now or in the future. Yeah, since the series is published out of Canada, the books are expensive…what with the dollar going down faster than a low-rent streetwalker at a Republican political convention…but they’re worth every penny for the dedicated follower of fashion. (Power Chord Press)